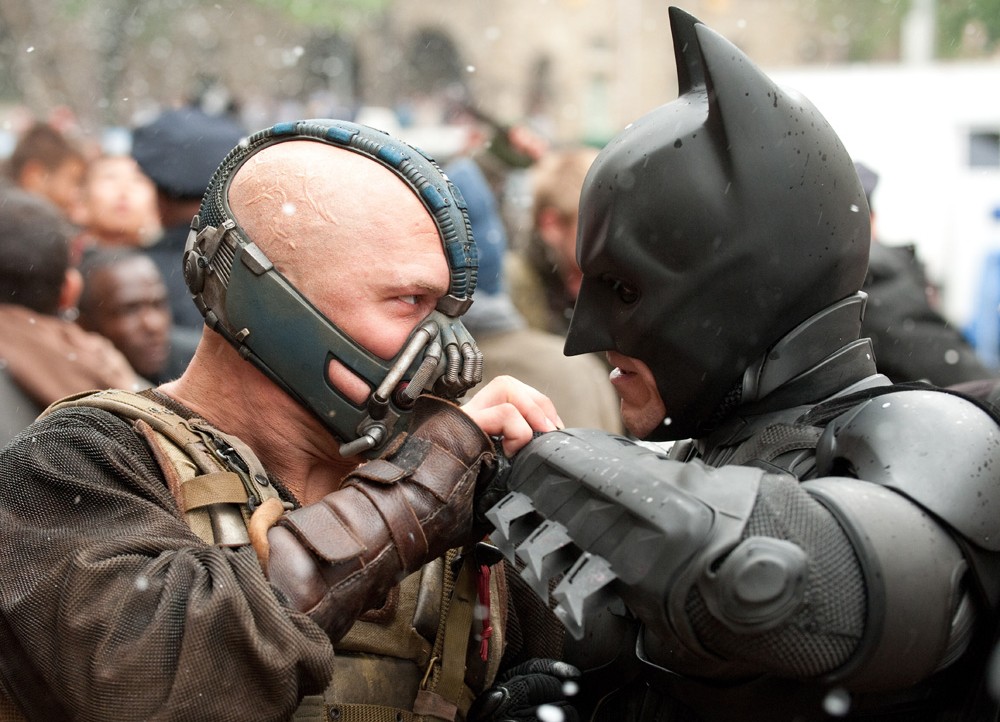 Eight years after the caped crusader, Batman, killed the evil Two Face, his victim’s alter ego – Gotham City’s District Attorney Harvey Dent – is still mourned and revered, to the extent that there’s a public holiday in his name, to recognise how his zero tolerance policy cleaned the streets.

With no crime – and a public backlash – the billionaire Bruce Wayne (Christian Bale) has retired his crime-fighting Dark Knight and become a recluse.

But a visit from a cat-burglar, Selina (Anne Hathaway), is enough to draw both the billionaire and his vigilante secret identity back out into the open.

The arrival of a new terrorist leader, Bane (Tom Hardy), has the city on edge, but while some welcome the return of the Batman, others fear that he is as evil and dangerous as Bane.

Having hidden himself away for so long, Bruce is shocked to discover that his business empire has been run into the ground and only the successful development of a nuclear power generator can save it – but Bane is after the same generator; he wants to turn it into a nuclear bomb.

Bane manages to rally not just his own armed gang, but thousands of the underclasses, eager to rise up against the corporations and politicians they believe are destroying their city, making his cause all the harder for Commissioner Gordon (Gary Oldman) to defeat.

As Bruce Wayne – and the Batman – our hero has the fight of his life on his hands, to put down the revolution and save Gotham City from Bane and the bomb, developed by his own failing company.

While the starting point is a troubled individual who develops amazing crime-fighting abilities – in his case through money and technology, rather than biology or mythology – and we have crazed megalomaniac, hellbent on destroying society, this film is dark and grounded closer to reality than most.

Indeed, the rabble-rousing Bane could almost be leading the Occupy Wall Street movement against the bankers and politicians who have led much of the western world into the second recession in just a few years. But where the analogy breaks down is that his opposition to the politicians includes releasing some of the most violent criminals who’ve been jailed under their laws – not, I would imagine, something that pacifist protesters camping outside St Paul’s Cathedral would go along with.

Likewise, plans to blow up the city with a nuclear bomb. And quite how that would help Bane himself isn’t quite clear.

Bane goes that little bit too far – and his motivations are just a little confused, or at least confusing – as are those of many of the supporting characters in this sprawling saga. And in some cases, where motivations are clear, they’re a little contrived or conflicting.

There are frequent references to Nolan’s previous Batman films and it will certainly help to have seen Batman Begins, if not The Dark Knight. Even Bruce Wayne’s character arc is similar, as he spends much of the movie as an underling in his civvies, training to re-emerge as a saviour.

Cameos from Liam Neeson and Cillian Murphy, both prominent in the opener of the trilogy, feel like they’re there more for geeks to show off their knowledge than for any true narrative purpose – and many of the other smaller roles, such as Juno Temple’s, seem frustratingly superfluous.

Even at nearly three hours in length, it feels like Nolan has tried to squeeze in too much plot and backstory – to the extent that much of both becomes expositional. He’d perhaps have been better to take the Harry Potter route and allow things to breathe a bit by presenting the final film in his trilogy as two hour-and-a-half instalments.

The script is tight – with many of the tricks of the trade employed in abundance – but Bane’s facemask renders much of Tom Hardy’s speech unintelligible. With the mask also obscuring all but his eyes, it makes you wonder why they even bothered hiring him – all that is recognisable about him is his remarkable physique, most recently displayed in last year’s Warrior, another film whose real-world aesthetic is reflected in The Dark Knight Rises; while other superhero films feature protagonists and antagonists being flung around with abandon, most of the fights between Batman and Bane are more like the bare-knuckle fisticuffs last enjoyed by Hardy as he pummelled his on-screen brother Joel Edgerton last year. Apart from the sticking power of the foes, the fights are rarely raised above the level of a drunken brawl.

The fighting, like the many underground locations employed here and indeed the plotting, is not elegant.

While the narrative is complex and without the Cliffs Notes at your side, it might be impossible to unravel, this is a film about spectacle. Christopher Nolan does not show us that he’s a great story-teller here, but he shows us he’s a great entertainer.

The scale of the sets and the stunts is almost overwhelming. About half of the film was shot in IMAX, so if your reason for seeing a film on the big screen is about the experience, seeing it on the biggest of screens is a must – it’s a shame that there aren’t even twenty across the UK, and a quarter of them are in London.

Where possible, this is proper, good old-fashioned film-making, with real stunts, real locations, real background extras and big cameras, rather green screens, computer generated people and digital technology. Most significantly, as two formats battle for supremacy in cinema exhibition – 3D and IMAX – Nolan has eschewed the plastic-goggles for the engulfing big-screen experience; it’s not the glasses that make his knight dark, it’s the director’s own vision.

It’s also refreshing to see such an eagerly anticipated film, a release of this stature, come out on a Friday – good honest releasing as much as it is good honest film-making – so that the all-important opening-weekend box office figures will actually be the opening weekend, rather than clawing in a few extra days from releasing earlier in the week, as most other distributors seem to do these days.

The Dark Knight Rises doesn’t reach the narrative level of its two predecessors but its a cinematic spectacle makes up for much of the shortfall.

Bale’s earnest and mournful performance as a reluctant saviour matches the downbeat mood of Nolan’s pessimistic vision and the bittersweet ending almost feels out of line with what’s gone before. How Nolan relates his story to the real world is also evasive, as he alludes to such topics as corruption, but despite passing comments, his plot strives to restore the status quo. It’s as if he’s trying to make you think – but he’s now sure in himself what he wants you to be thinking. But at its heart, this film presents its protagonist – in both of his guises – with the challenge of regaining the honour and respect of his fellow citizens.

By putting this story to bed, Nolan – who at forty one last week became the youngest director to have his hands and feet immortalised in the forecourt of Grauman’s Chinese Theater in Hollywood – can move on to other projects that are queuing up to burst out of his mind and onto the big screen.

“The legend ends” – say the posters – until the next reboot, no doubt, while Nolan – one of Hollywood’s greatest exponents of the thinking-man’s-blockbuster – will surely start on a new one.