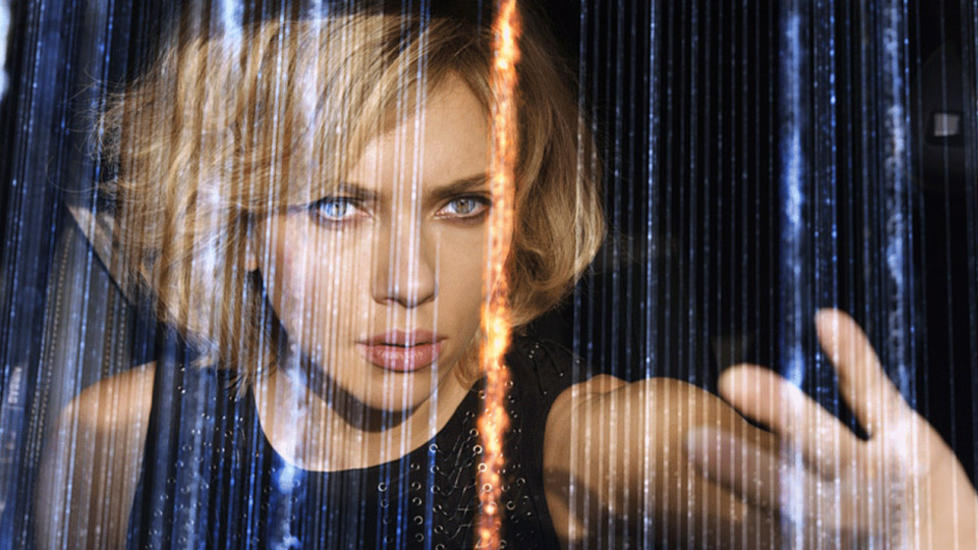 Lucy (Scarlett Johansson) is an American student in China. Her boyfriend (Pilou Asbæk) forces her to deliver a brief-case to Mr Jang (Min-Sik Choi), who turns out to be the most ruthless drug trafficker in Asia.

He doesn’t just want the suitcase – he wants her to smuggle the contents into the West for him, along with three men he’s previously taken hostage. All four of them have a bag of the drugs sewn into their abdomens, but Lucy’s breaks inside her and leaks.

It turns out that in high doses, this drug enables the user to access more of their brain capacity – and it seems that, in this world at least, the more of your brain you can use, the more powerful you become – first in intelligence, then in physical power and then in control of other things and people.

Jang, it seems, picked the wrong girl to mess with, as all the heavies he dispatches to try to retrieve his drugs are no match for the monster his package has turned Lucy into.

Despite being presented against the background of Morgan Freeman’s eminent scientist, giving a lecture about what humans could achieve if only they could access more than 10% of their brain, this story is little more than a journey into Luc Besson’s typically wild imagination.

From Nikita, Leon and The Fifth Element through to The Extraordinary Adventures of Adele Blanc-Sec and beyond, Besson is a man who unashamedly throws as much visual flair as he can at the screen and almost without exception, centres his films on strong women. And Lucy is the natural next step in that progression, as we see the workings of the mind of Scarlett Johannson, just out of another sci-fi lead in Under the Skin, playing just about the strongest woman planet earth has ever seen. In this film, she’s magnetic – both under the skin and beyond.

The story is clearly nonsense, but it’s told with such passion, boundless energy and vibrant imagination and it’s so bold – visually, thematically and narratively – that it’s hard not to be enthralled.

The longer it goes on, the sillier it gets, but it’s enjoyably, thrillingly silly.