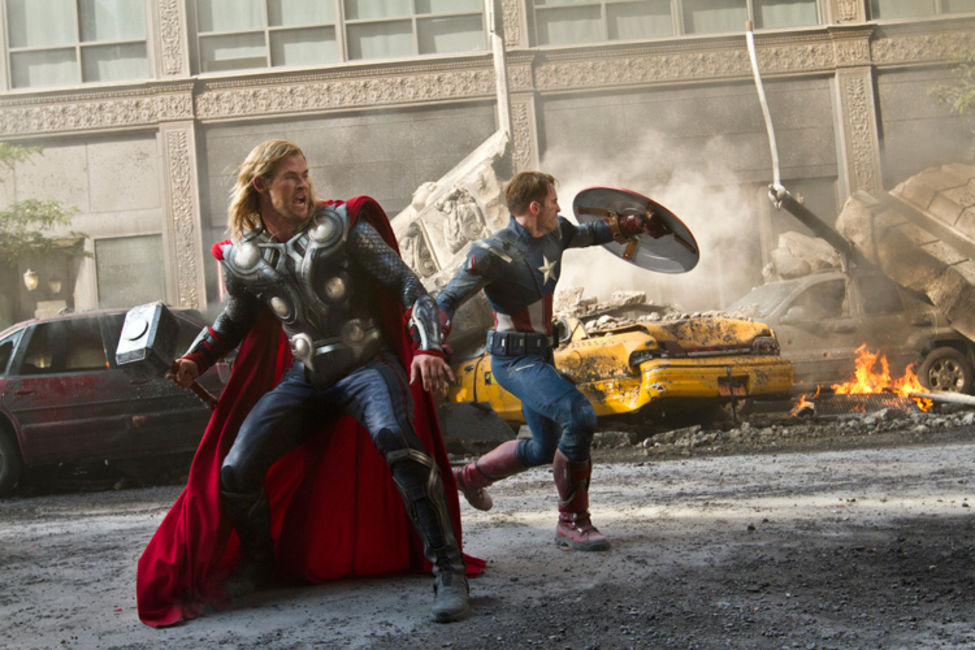 Loki (Tom Hiddleston) – the estranged brother of Thor (Chris Hemsworth) – arrives on earth to steal the Tesseract – keep up – it’s a blue cube of energy that will enable Loki to take control of planet earth. It’s currently in the possession of the SHIELD spy network, under the watchful eye of Nick Fury (Samuel L Jackson)…

…well, not so watchful, as Loki succeeds in snatching the MacGuffin.

Fury’s only chance of saving the world from Loki’s clutches by getting the Tesseract back is to round up a team of special spies with special powers – well, some of them don’t so much have special powers, more special costumes; there’s Captain America (Chris Evans), whose strength comes mostly from his shield and his blue spandex leotard, Iron Man (Robert Downey Jr), whose powers come from his high-tech, flying robot suit, the Black Widow (Scarlett Johansson), whose power seems to come from her black leather one-piece and Bruce Banner (Mark Ruffalo), whose power, we all remember from the 1970s TV show, comes not from his clothes, but from getting angry. You won’t like him when he’s angry.

But Loki manages to turn a couple of SHIELD operatives from the outset, including their top scientist Selvig (Stellan Skarsgård) and Hawkeye (Jeremy Renner), who’s as adept with a bow & arrow as Katniss Everdeen from the Hunger Games. But another spanner is thrown in the works by a surprise visit to earth by Thor, eager to resolve his own differences with Loki.

Using all the powers and resources at their disposal, the band of heroes, known as the Avengers, have to rescue Hawkeye and Selvig from the clutches of evil, tame Thor to get him on side and defeat Loki and his army of alien invaders – all without making Bruce Banner too angry.

You might get a sense that for anyone not familiar with Marvel’s many universes, there’s not too much point trying to get to grips with the plot.

But that doesn’t make it any less entertaining.

Even in a film of such a substantial length, there are an awful lot of characters to introduce to the viewers, many of whom will not have met them in their earlier big screen encounters, and most of whom have two personae to get to know in the first place – their every day identity and their super-hero alter-ego.

This is done effectively and surprisingly humorously, with Robert Downey Jr being particularly fun to watch throughout.

One problem, from a character point of view, is that some of the so-called super-heroes don’t seem all that super at all – Scarlett Johansson’s Black Widow can handle herself in a fight, but so can lots of people who’ve learnt some martial arts; Jeremy Renner seemed to have more powers as a secret agent in Mission Impossible 4 and as a bomb disposal expert in the Hurt Locker.

And while Mark Ruffalo makes a perfectly acceptable Bruce Banner (taking over from Ed Norton and Eric Bana before him), who’s largely in control of his temper, there’s a huge inconsistency that when the plot requires it, the Hulk is alternately uncontrollable and measured in the application of its strength.

And the purest of all evil, Tom Hiddleston’s Loki, is manifested in a prim English accent, for his powers largely come from pointing a glowing stick at people. Given that the threat he poses is supposedly so severe that no single super hero can defeat him alone, he actually doesn’t seem as interesting, as baddies go, as many of the antagonists faced by each hero in their own films.

So, from a plot and character point of view, it’s all a load of nonsense, but it throws some surprisingly funny one-liners at the audience with disarming regularity and the effects are, as you’d expect, impressive.

Fans of Marvel’s world will be drawn in from the start and newcomers who leave their brains at the door will have a thrilling time.

If you give the film-makers the benefit of the doubt and assume they’re simply trying to entertain rather than educate or stimulate, they’ve done everything they set out to do.

But for many film-goers, that’s just not enough.