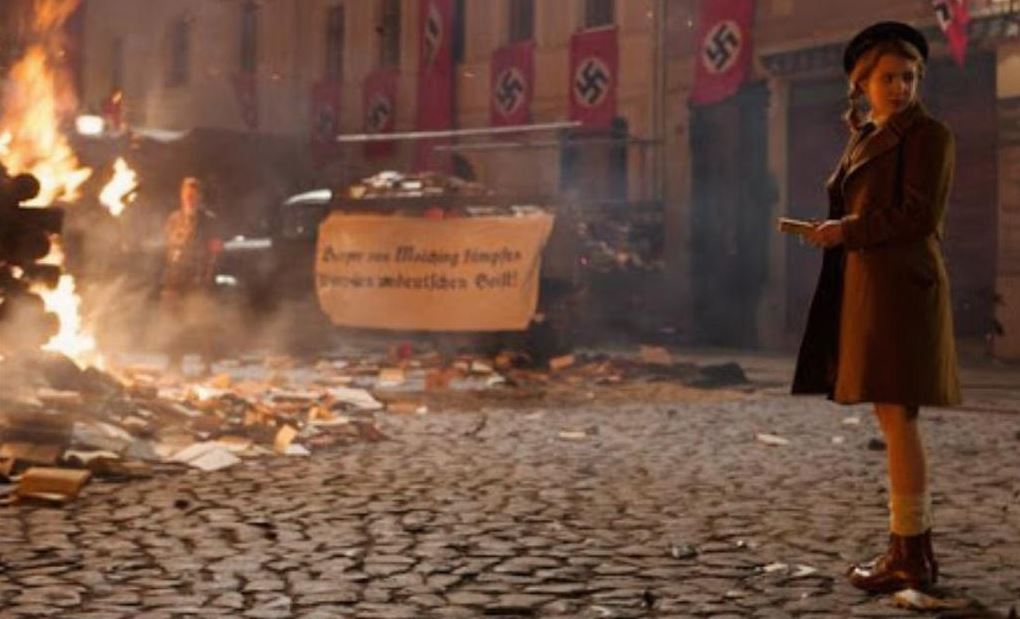 During the Second World War, a middle-aged, working class German couple, Hans (Geoffrey Rush) and Rosa (Emily Watson) are hoping to adopt two children for the welfare payments they will receive, so the cold Rosa is particularly annoyed to hear that one of them died on the way to their home. She even seems to take it out on poor Liesel (Sophie Nélisse), as if it’s her fault her brother died.

Hans is far more supportive, loving her like a father and even teaching her to read. Her life soon resembles that of any other child, going to school and making friends.

But the horrors of war conspire to shatter her new normality. Hans and Rosa secretly take in Max (Ben Schnetzer), the son of a Jewish friend, and hide him in the basement – something Liesel has to keep secret or everyone’s lives will be at risk. And when the Nazis order that all books are ceremoniously burnt, she’s denied her newfound passion – until she discovers that a local aristocrat has a fully stocked library.

The Book Thief is a moderately successful attempt to introduce aspects of the Second World War to youngsters, but narratively, it’s less of a success.

While the sets and costumes give an effective sense of place and time, the faux accents lack the authenticity for us to believe that these people are real.

Sticking too rigidly to the structure of the book on which it’s based, the story is told from the point of view of a narrator (Roger Allam), who turns out to be the angel of death, which doesn’t particularly sit well in the context of a film that isn’t really about death. He begins by announcing that he’s going to tell us the story of an exceptional young girl, but from the outset, Liesel just isn’t particularly exceptional – her life, while interesting, doesn’t seem to be spectacularly different from many others during that time. It was tough for her family to make ends meet, they had secrets from the neighbours, friends and family got conscripted to fight on the front-line – even hiding people from the authorities wasn’t unknown.

It’s interesting to set the story in a community of “good” Germans, some of whom support the war effort more than others, but this means there is no real antagonist – it’s the allies who are trying to kill the Nazis, but we don’t hear about them – and the ruthless local authorities are rarely seen in this sleepy town.

This almost makes the narrator – death – the biggest threat to those whose lives we’re watching unfold, in a sanitised 1940s Germany where you almost wouldn’t know that a holocaust was going on down the road – although it’s quite possible that this would have been true.

It’s difficult to determine the true point of this film, as we don’t get much of a sense of the fighting or the brutality or futility of war and while we get so admire the resilience and resourcefulness of its protagonists, both adults and children, there is little we haven’t seen in other films and other settings.