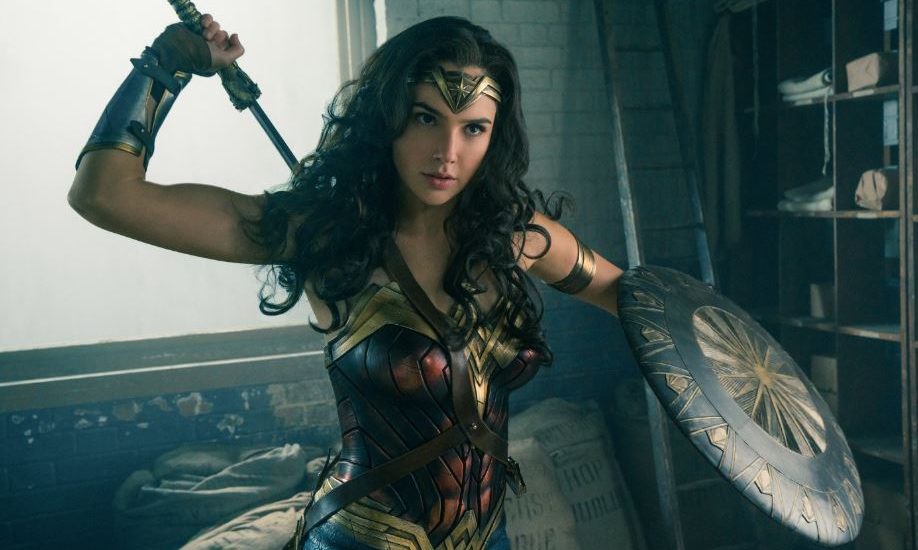 When the ancient Greek god of war, Ares, went rogue, Zeus created a race of Amazons to keep the peace. All women – and all warriors – they live on a paradise island, protected from the darkness of the outside world by an invisible force-field.

When a World War One warplane appears through the force-field and crashes into the sea, Diana (Gal Gadot), Princess of the Amazons, dives in to save the pilot. Use of her “lasso of truth” reveals that Steve Trevor (Chris Pine) is in fact an American spy, working with British forces, to expose a German plot to produce a poisonous gas that might turn the course of the War, just as the Armistice is about to be signed.

Diana concludes that Ares must be behind Germany’s war effort and decides to follow Steve back to his world to try to kill Ares and bring the war to an end.

They sail to London, where Steve passes on the secrets he’s discovered to government minister Sir Patrick (David Thewlis), who’s been working on the Armistice. He refuses to let Steve go after General Ludendorff (Danny Huston) who’s developing the gas, because he doesn’t want to jeopardise the Armistice.

So Diana – a fish out of water, struggling to fit in to the early twentieth century – accompanies Steve to the front-line in Belgium, to try to trace Ludendorff to stop him using the gas.

Wonder Woman, previously seen in a supporting role in the disastrous Batman v Superman, gets her own outing, complete with origin story – an origin story that explains that she’s essentially thousands of years old and been waiting for her calling since she was just 8. There’s a peculiar sense in which it’s not clear whether the film is trying to tell a superhero story – or an ancient Greek myth.

We get the early scenes of a young child being trained in the way of the warrior, before she gets to put her skills into action in an horrific battle scene on her own doorstep – the Amazons using little more than bows-and-arrows and horses to combat the might of the German armed forces.

The first modern-day blockbuster super-hero film to be centred on – and directed by – a woman, even includes the comedy clothes-horse scene, familiar from such fish-out-of-water films as Pretty Woman, as Diana tries to find the right outfit to help her blend in.

Setting the film against the backdrop of the First World War gives the narrative a peculiar historical context – I don’t remember Wonder Woman being taught in GCSE history. And bracketing the story between brief modern-day scenes raises the question of how Diana managed to age from 8 to adult between the flashback and the main story of the film – but then not age at all between the First World War and modern-day.

It’s also not particularly clear what her super-hero powers are – she’s a well-trained fighter, but who isn’t, in the world of DC and Marvel comics? Her main super-powers seem to be that she wears bullet-proof bracelets, carries a lasso that compels its captives to tell the truth and owns a cool shield, like Marvel’s Captain America.

There are a handful of set-piece action sequences with the requisite special effects which will be exhilarating for most audiences, but the plot never convinces to the same extent, making it feel like a lot more style than substance.

While the film is clearly targeting a female audience, unlike most comic-book adaptations, the feminists in the audience might be a little disgruntled that Wonder Woman – or Diana, as she’s more simply known – couldn’t have saved the day without the help of her big, butch, brave buddy Steve, whose antics generally seem to be more heroic – and believable, even in the context of such a film. Her motives are also somewhat peculiar, being from a race of pacifist warriors, trained to fight to end all wars – although none of her fellow Amazons seem remotely interested in helping her.

And at a time that feminists are rebelling against the notion of body-shaming, they might also have something to say about the fact that in order to be a world-saving super-heroine, Wonder Woman has to be such a gorgeous goddess. Gal Gadot herself is a beefed-up and earnest but rather humourless presence, who looks the part but doesn’t really seem to be breaking much ground, even when she’s putting the Tommies to shame, running solo across no-man’s land, into German machine-gun-fire, with only her bracelets to protect her.

The emotional highlights of the film are the lighter moments that come from Pine’s American spy and his secretary (did wartime spies have their own secretaries?!), played by The Office’s Lucy Davis. The rest of the film is largely an over-the-top piece of CGI fun – perfectly entertaining, but narrative nonsense that fails to deliver more than a skimpily-dressed female warrior, being a worthy but naive do-gooder with her magical toolbox.