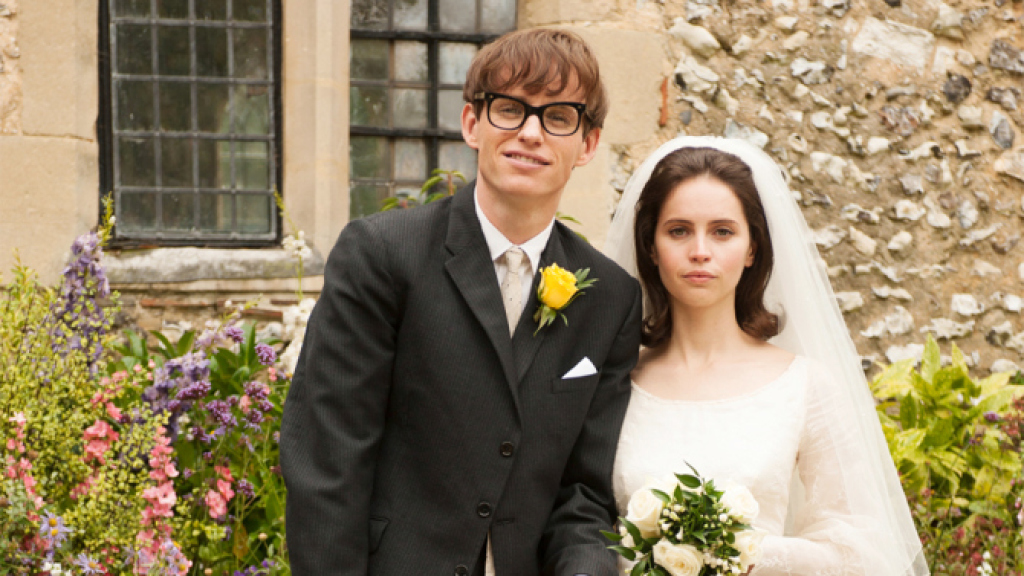 In the early 1960s, apart from having a brain the size of a galaxy, Stephen Hawking (Eddie Redmayne) was no different from any other post-graduate student at Cambridge – going to parties with his friends and eyeing up women – well, one woman in particular; Jane Wilde (Felicity Jones).

She’s a firm believer in God. He’s quite the opposite, devoting his life to proving his non-existence. But opposites attract and before long, the couple are courting and everything is going well.

But Stephen starts to feel his muscles getting weak and soon finds himself dragging his feet and falling over. When he’s diagnosed with the degenerative Motor Neuron Disease, he’s given just two years to live. He tries to break off his relationship with Jane, to save her the pain he can’t escape, but she’s determined to stand by her man.

Despite his failing health and increasing reliance on assistance from others, Stephen goes on to build a reputation as one of the world’s most respected cosmologists and for a while, his home life is every bit as successful as his professional achievements.

But the couple’s growing dependence on home-care and live-in nursing eventually put their marriage under impossible pressure.

With this in mind, don’t expect too much cosmology – this is a story about the emotional side of the man – but a man who’s hell bent on understanding the universe is never going to be particularly emotional, and when his disease-ridden body all but stops him experiencing any physical kind of intimacy, the love story seems oddly conflicted. At various times, both halves of a couple who were clearly deeply in love at the start find their hearts straying and the film is never quite sure about the morality of the decisions they make; we’re usually programmed to turn against characters who are unfaithful, yet here, the infidelity seems inevitable and the pair remain friends.

Both Eddie Redmayne and Felicity Jones have received awards nominations for their efforts and rightly so. Jones is certainly warm and sympathetic, but with the story told from her character’s point of view, she was always going to win the support of the audience. Redmayne’s performance is a little harder to accept in that, while it’s unquestionably skilfully delivered, it borders on an impression. This is always a problem with biopics of living icons, but where Redmayne manages to make his mark is in the way he portrays the disease increasingly sucking the strength from the scientist’s body; it’s in showing the progress of the disease that the performance particularly excels.

One thing that certainly comes out of this story is the remarkable achievement of someone whose mind was able to blossom despite the failure of his body, as a result of a disease that’s been brought more into the public eye by the ALS Ice Bucket Challenge, in recent months, than by one of the world’s most famous scientists.

There were some unexpected touches of humour – such as Hawking’s experimentation with his new voice simulator – and it was very nicely shot – although some of the cinematography felt a little arch – beautiful though it looked, I’m not sure that you’d have such a fantastically clear view of the stars in the night sky while standing on a bridge lined with bright lights.

The time frame is sometimes hard to follow, with only Jane’s clothes and hair and the cars to alert us to the fact that we’ve jumped forwards a few years; given that the film spans about thirty years, the main characters don’t particularly age and they certainly don’t look three decades older at the end than the start.

Given that The Theory of Everything largely steers clear of the science at the heart of Hawking’s existence, it’s more of a film about how disability affects relationships rather than a film about one of the greatest living minds himself. And as such, without offering a particularly fresh insight into living with – or living with someone with – Motor Neurone Disease, it’s not as much of a revelation as it might have been. A biopic of Stephen might have been more “out of this world” than a biopic of Jane.