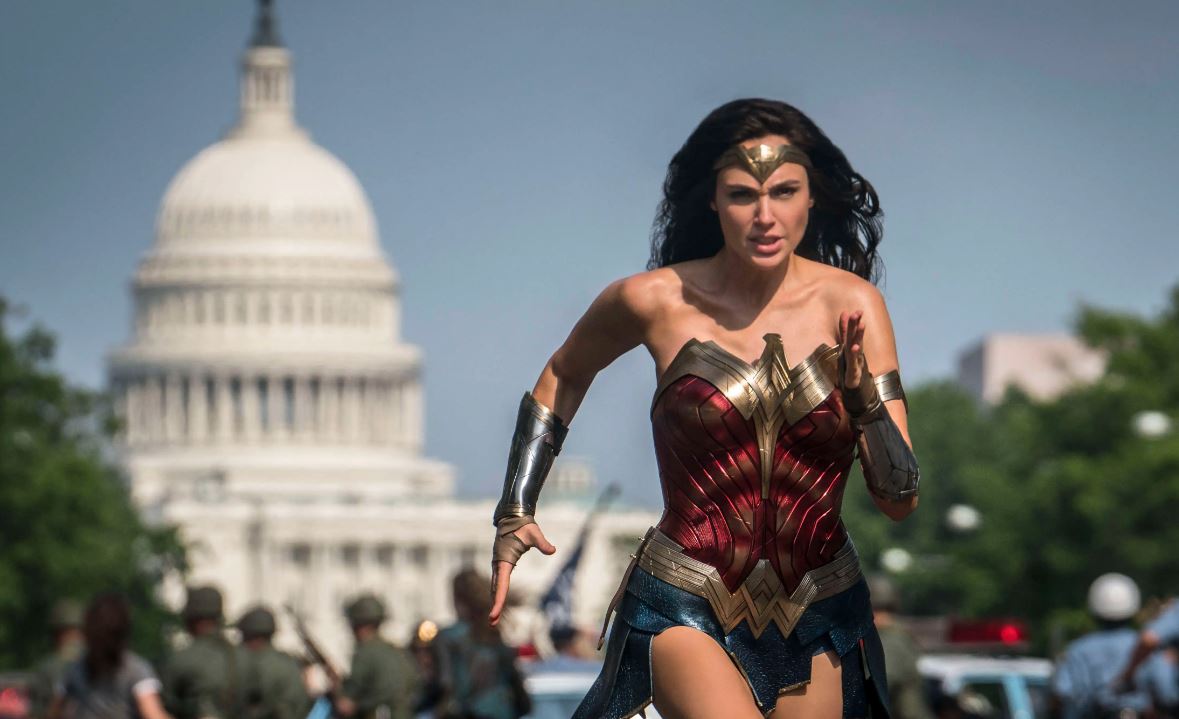 Diana Prince (Gal Gadot), an archaeologist at Washington’s Smithsonian Museum, turns up – in her super-hero alter-ego – to stop an armed raid at a jeweller’s at a busy shopping centre.

It turns out that the shop has been used as a front for dealing stolen treasures and the trove ends up being taken to the Smithsonian to be examined by experts.

The newest expert on the block, a shy and clumsy gem specialist, Barbara Minerva (Kristen Wiig), is asked to take a look through the collection.

One item in particular interests a TV infomercial star Max Lord (Pedro Pascal), who flatters and befriends Barbara to try to get hold of what turns out to be a Dream Stone; touch it and one wish will be granted, but it turns out not to be a one-way street – it’s a bit of give and take.

Diana, Barbara and Max all end up making a wish – the consequences of which could affect the whole world. Only renouncing the wish or destroying the stone can save humanity – but when you’ve tasted success, power and even love, it’s hard to give it up.

I guess Warner Bros never got their hands on the Dream Stone, as they’d surely have wished that the release date for only the second blockbuster since the pandemic began – the first being the same studio’s Tenet – hadn’t coincided with London, parts of Essex and Hertfordshire joining Kent and much of the north of England in Tier 3 – with cinemas all closed.

With even more areas of the country moving into Tier 3 by the end of the week, fewer than a quarter of the UK’s cinemas will be welcoming visitors for its opening weekend.

So – are most of us missing out on two and a half hours of uplifting escapism or are we lucky to be saving time we could be doing something more rewarding?

The industry is fickle. In the summer, Warner Bros was hailed as the saviour of cinema, being the first – and as it turns out only – studio to release a major blockbuster during the pandemic. Earlier this month, the same studio was accused of killing cinema by exhibitors and film-makers alike, when it said its full 2021 slate (from WW84 onwards) would be made available on demand in the US at the same time as in cinemas. Now, it’s a saviour again, giving a dwindling number of big screen enthusiasts an excuse to leave their sofas.

And what those fans need are bold acts of heroism that jump off the big screen and demand to be seen with a crowd of strangers and Wonder Woman 1984 has some of that – but nowhere near enough. And if those fans require a narrative to pull together the action sequences, they’ll be hugely disappointed.

It starts, in a thrilling flashback, with a young Diana (Lilly Aspell) learning the importance of being truthful as she takes part in a heart-stopping obstacle course against athletes twice her age. Next we move to 1984, for some super-hero hi-jinks as a fully-attired (or skimpily attired) Wonder Woman foils an armed raid on a jeweller’s as astonished shoppers look on – or run for cover.

Then we get the best part of two hours of people walking around museums and offices in 80s outfits, saying “I wish this…” or “Do you wish that…” before Diana Prince and her long-dead boyfriend (Chris Pine – don’t worry, it’s not a spoiler as he’s on the posters) fly off in an invisible plane to try to stop the power-hungry villain from slowly sucking the life out of everyone who’s been granted a wish.

The plot is nonsense – but this is a superhero film, so we don’t expect scientific accuracy. But the way the narrative unfolds is so incoherent and unconvincing, that anyone who’s looking for any kind of mental exercise will be wishing the film would stop, as its two and a half hour running time rumbles on and on.

It’s never clear whether Kristen Wiig’s Barbara is a super-villain who wangles her way into an influential job at the museum to get close to the Dream Stone, or whether she’s genuinely a naive scientist who gets carried away with her newfound powers. A montage to encourage us to sympathise with Max Lord’s materialistic megalomaniac serves to undermine his evil.

But whatever you think of the main antagonists, most of those who find themselves at the wrong end of Wonder Woman’s fists and bullet-blocking bracelets are not evil super-villainous underlings but people who in any other film would be regarded as the good-guys: they just happen to find themselves getting in the way of our heroes, as they don’t realise that a Dream Stone is causing global chaos. They should perhaps watch the news more.

How did Max know about the Dream Stone in the first place? Thousands of extras appear and disappear when the plot requires it. People who are miles away from each other manage to bump into each other at the appropriate moment. Too often, characters do exactly what they just said they’d never do. Little is made of perhaps the most hilariously misjudged superhero rescue effort that’s all the more cack-handed at that point, we’ve been waiting seemingly hours to see the eponymous heroine in her full garb.

You have to wonder why the 1980s were even chosen for this sequel, when modern-day social media would connect with younger audiences and fit the message every bit as much as 80s infomercials.

There’s a rare moment of humour, with a knowing nod to all those 80s films where the leading ladies would try on different outfits to music, as Chris Pine’s World War Two airman rifles through a wardrobe to find clothes to suit him.

The two main selling points of the previous film – as with this one – are the female protagonist and the female director, but – as with the previous one – this feminist fable comes to life only when the supermodel in the lead role bares her legs and shoulders – and I’ve never seen so many close-ups on shoes or heard so many jokes about high-heels in a film. Surely the whole point is to show audiences that everyone can enjoy films made by women – not to alienate men with jokes about how difficult it is to walk in high heels.

Wonder Woman 1984 is entertaining at times – a fun piece of rare, big-screen action, for which “Thank you Warner’s,” but there’s too much anthropology and not enough Wonder Womaning, the villains aren’t frightening, the story was nonsense and by the two hour mark, all could do was imagine getting own hands on the Dream Stone and wishing the film would stop.