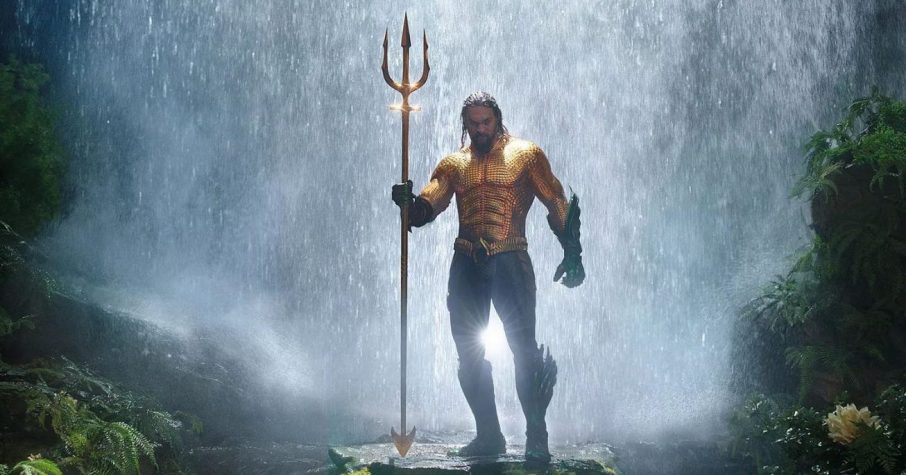 Half Atlantean and half human Arthur Curry (Jason Momoa) learns that he is heir to the underwater kingdom of Atlantis.

When he takes his rightful place as King, he has to lead his people while saving the human world from the clutches of his evil younger brother (Patrick Wilson).

This seemed more like the battle of the barnets as Jason Momoa competed with Amber Heard and Nicole Kidman for best locks and hair action and frankly there was plenty to go around.

That said, it needed someone larger than life to play this super-hero and Momoa was definitely the perfect man for the job, bringing lots of muscle and stature, as well as humour, to a rather wet role.

Let’s face it, with his ability to talk to sea life and swim fast Aquaman doesn’t really bring much to the super-hero table. But Momoa makes Aquaman his own and I can’t imagine anyone else in the part, let alone someone who can carry off a man bun (an odious look) or be able to flick their hair with such virile panache and style as Momoa.

Director James Wan (Insidious, The Conjuring and Fast And Furious 7) delivers a fast and furious action packed origin fantasy film which is as ridiculous and cheesy as it is fun.

That said, it comes with a cautionary environmental message regarding the damage we are doing to sea life.

It features an all star cast, headed by Nicole Kidman, as Aquamom aka Queen Atlanna, which also includes Willem Dafoe, Patrick Wilson and Dolph Lundgren who are all clearly having a blast. Though Amber Heard was somewhat wasted as Aquaman’s love interest Mera with her luscious red hair.

The underwater sequences are breathtaking and will have you pondering throughout as to how they were achieved which is again another unnecessary distraction.

But for me I couldn’t get past all the hair-ology and the feeling that I was watching a two and a half hour long L’Oreal hair advert as I half expected Momoa to deliver the immortal “because I am worth it” line.