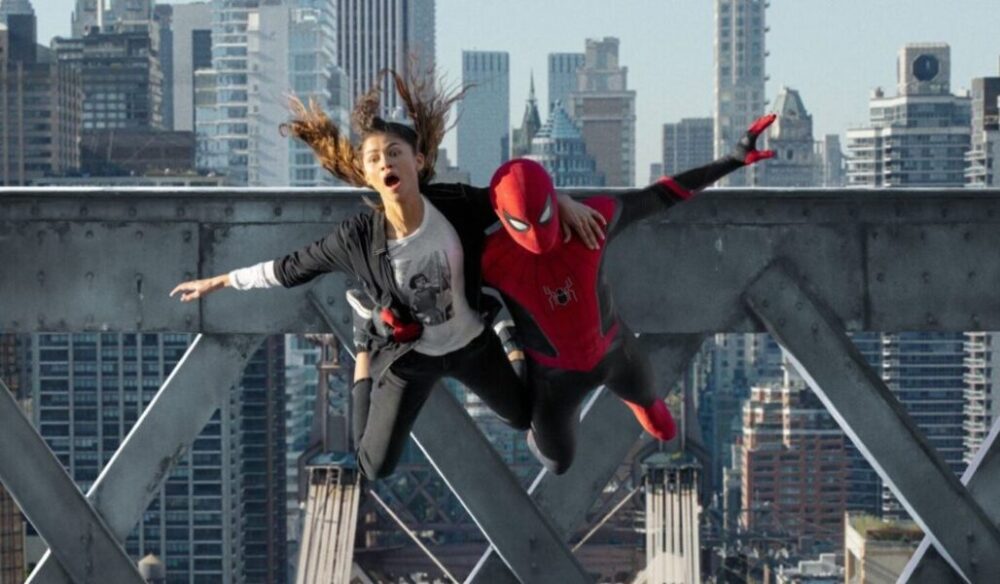 We pick up from the end of Spider-Man: Far From Home, whose villain Mysterio has just revealed to the world that our hero – being portrayed to the world by tabloid hack J Jonah Jameson (JK Simmons) as a menace – is really the otherwise unassuming New York high school kid, Peter Parker (Tom Holland).

With his secret identity exposed, life gets so difficult for Peter and his Aunt May (Marisa Tomei) that they have to go into hiding to escape the press.

But when Peter realises that the lives of his girlfriend MJ (Zendaya) and best friend Ned (Jacob Batalon) are also being affected by his newfound notoriety, he turns to mystical magician – and fellow Avenger – Dr Strange (Benedict Cumberbatch) for help.

He can’t turn back time, but he can make everyone in the world forget what they’ve just heard – but the spell goes wrong and New York 2021 finds itself invaded by super-villains not just from the past, but from parallel universes; the techno-tentacled Doctor Octopus (Alfred Molina), Willem Dafoe’s Green Goblin and Thomas Haden Church’s Sandman from Tobey Maguire’s tenure of the red-and-blue suit are joined by Jamie Foxx’s Electro and Rhys Ifans’ Lizard from Andrew Garfield’s Spidey universe.

When Peter and Dr Strange realise that they’ve inadvertently opened up portals between different parts of the multiverse, they have different views of what to do about it; while the villains try to wreak havoc, Peter sets out to help them – cure them – before sending them home.

Since Captain America: Civil War in 2016, Spider-Man has been residing comfortably inside Marvel’s Cinematic Universe, alongside his Avenger friends. But the character had already had two earlier big-screen iterations, over the past two decades – starting with Tobey Maguire, long before the MCU was even conceived.

Recent legal deals between Sony and Marvel have enabled No Way Home to bring the earlier films well and truly into the same universe – or, perhaps more accurately, the same multiverse.

It’ll take some head-scratching to work out what’s going on here – both for us and the characters from parallel universes converging on the world of Tom Holland’s Peter Parker. And while there are some things that are tough to make sense of, there are others that make no sense at all; if you go into hiding to escape the press and the public, would you turn up at school as normal and write your new address on your university application form?

But – as you might imagine – this isn’t really a film about plot. You don’t need to understand exactly who’s doing what and why to marvel at Spider-Man swinging from lamp-post to lamp-post or Doctor Octopus throwing cars from a bridge during rush-hour. And even if the greatest super-villains in all the universes don’t seem to have a plan to work together to take over the world, it’s still fun to watch them chat about the difficulties of their trade or line up, one by one, to fight our protagonist at the top of the Statue of Liberty. And the plot is clearly driven by which actors agreed to participate, making you wonder why some characters were brought back at all.

A lack of direction also comes from having so many characters to concentrate on; in earlier films, when the villains were working alone, their own goals and motivations were clear and the hero had to save both strangers and loved ones from danger – the whole plot, here, is predicated on Peter feeling bad that his friends haven’t got into University.

There’s a lot of introspection, leading to some enlightenment for the characters and humour for us, but it feels a little uneven, never quite clear whether it’s trying to be dramatic, funny or thrilling – at times it manages each, but take a step backwards and there’s no clear purpose for this film, except to entertain the audience – which it does – but not with the depth it’s clearly aiming for.

No Way Home is a peculiar blend of modernism and nostalgia – gone are the days when Spider-Man films were bright family fun that were really about teenaged angst, rather than being dark and pessimistic existential epics, yet to get the most out of this one, you’ll need to remember characters from films dating back nearly two decades. The nostalgia almost makes the villains feel like old acquaintances you’re keen to reconnect with.

But while it’ll have more meaning for those who’ll nod in acknowledgement and enjoy memories of their younger days, there’s a sense that this is more of a Spider-Man’s greatest hits (and misses) than a piece of entertainment that can earn its place in the comic-book canon by virtue of its own narrative arc. And for viewers not familiar with the old characters, there’s little fresh for them, and what is there will often go over their heads, without giving any of the old-timers the opportunity to earn the interest of new audiences.

It’s a bit of a superhero comfort blanket for over-40s, and more of a random cacophony of villainry for relative newcomers – but perhaps what younger audiences are after anyway.

It’s slick, well choreographed fun, as you’d expect, and just the kind of superhero escapism that many lockdown-hit audiences will be looking for. But you have to wait until the inevitable mid-title and post-title sequences to get a sense of where this starts to fit in with other entries in the newly expanded Marvel Cinematic Multiverse.