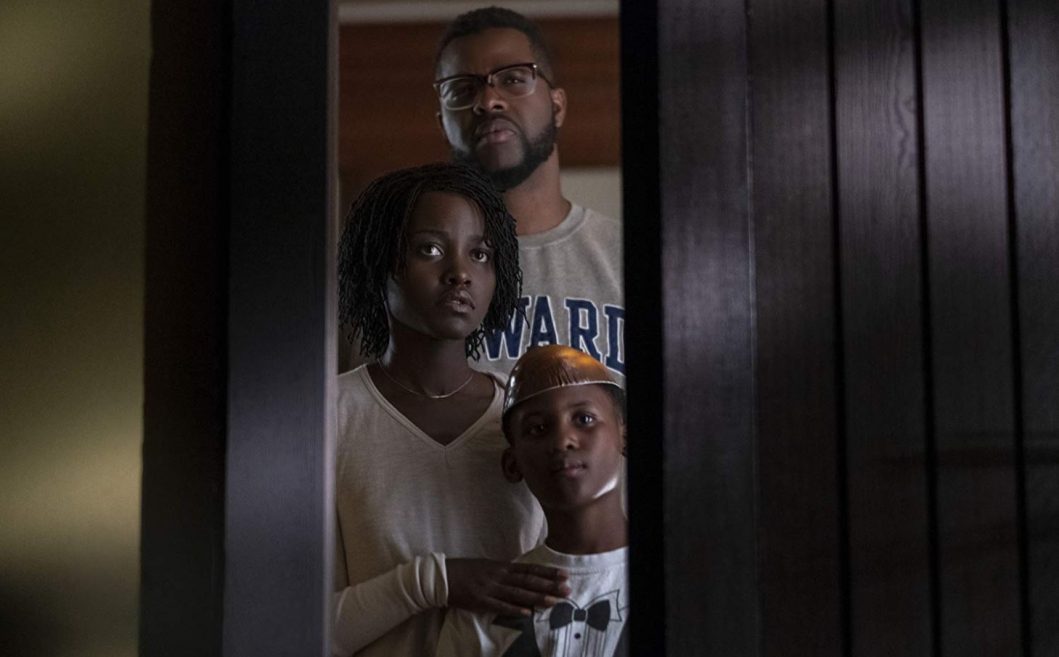 Adelaide (Lupita Nyong’o) is on holiday with her husband Gabe (Winston Duke) and their kids at the family’s holiday home in the country.

She seems a little unsettled about being there and is particularly uncomfortable about Gabe’s suggestion of a trip to the beach at nearby Santa Cruz.

She’s been there before – as a child – and had a life-changing experience that’s been haunting her ever since.

But she can’t hide any longer – and her past catches up with her; one night, outside their holiday home, they notice a family in the driveway – a family that looks very much like them.

And it’s not just the Wilsons being targeted; everyone finds themselves confronted by ghoulish, scissor-wielding, boiler-suited doppelgangers.

Us is certainly not a film that rewards lazy viewers. Neither will it satisfy audiences who like to sit back and guess, confidently, what’s going to happen next.

Jordan Peele’s follow-up to his Oscar-winning Get Out is another slow-burning chiller, but this one flips up a gear much sooner and quickly metamorphoses into a full-on, in your face horror.

Peele’s history in sketch comedy ensures that he peppers the darkness with enough humour to wrong-foot you, thanks to the confident screen-presence of Winston Duke’s husband and father. But it’s Lupita Nyong’o’s twin performances as a matriarch trying to protect her own family from her past and her unhinged, menacing alter ego that anchor the film.

It’s a truly menacing, effective piece of horror, with a twist which initially seems unnecessary and unlikely but on second thoughts, provides a satisfying explanation as to how the back-story unfurled. It also leaves interesting new questions hanging in the air.

There are also wider themes of vengeance and jealousy lurking beneath the surface.

But this all rests on you accepting the underlying premise of this film and that’s just a little unconvincing. When you finally realise what’s going on, it’s a little too much of a stretch to suspend your disbelief sufficiently. Most discerning viewers will start wondering why a whole range of more likely events didn’t occur, other than that they would have stopped the story before it started.

What starts out seeming like it will be a supernatural chiller turns into more of a high-concept thriller, which carries a little less of a feeling of dread. And what starts out feeling brutally fresh and original becomes a little pedestrian, as the family at its centre seem to be the only ones capable of staying alive.

But narrative tricks or illogical plot-holes aside, it’s certainly a neat, creepy, chilling piece of formula film-making that will satisfy horror fans.