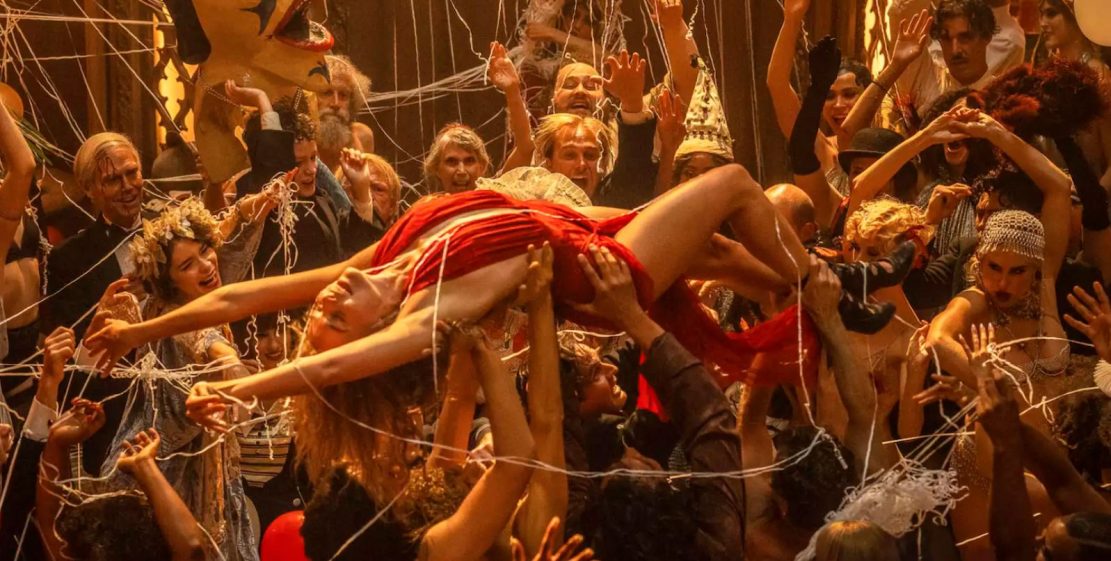 Manny (Diego Calva) is right at the bottom of the 1920s Hollywood ladder, delivering an incontinent elephant to a studio boss’s debauched party at his remote mansion.

Another of his jobs there is to keep out the riff-raff, but when aspiring starlet Nellie LaRoy (Margot Robbie) turns up, he smuggles her inside instead.

Through the kind of coincidences that can only happen in Hollywood – if not Hollywood movies – he ends up befriending silent movie star Jack Conrad (Brad Pitt), while she picks up a small role in Conrad’s latest film.

Over more than three hours, director Damien Chazelle follows the ups and downs of a handful of Hollywood hopefuls and has-beens – including Manny, Jack, Nellie and others they work with along the way.

The creator of Whiplash and La La Land, Damien Chazelle knows how to bring the arts – specifically music – into his story-telling. We’ve had hardcore jazz drumming and a feel-good old-time (but contemporary) musical, about an actress and a jazz musician; now he turns his attention to the same period of Hollywood’s history covered by the classic musical Singin’ In The Rain, as he shows stars of silent movies struggling to adapt to sound.

The set-pieces are remarkably handled – from the euphoria of the opening party scene to some underground partying, bracketing the story as the denouement approaches – but the narrative itself is somewhat lacking in direction or purpose.

At more than three hours, this sprawling depiction of the city of Angels is inexcusably long and could have – should have – been crafted into a more focused drama. In addition to following – variously – the rises and falls of Jack, Manny and Nellie, we also follow the interlinked stories of a Chinese lesbian cabaret star, a talented black trumpeter, a sleazy journalist and a hapless talent manager.

There are perhaps one too many scenes involving projectile bodily fluids and a number of sequences are allowed to drag on long after we’ve got the point; there was a horrifying moment, about twenty minutes in, when I feared that the entire film might be a real-time portrayal of a debauched Hollywood party – but when the action finally bursts into the light, it explodes like the Big Bang, as if the party was a pent-up ball of energy, waiting to spit stars in all directions in a scatter-gun approach which seems to hope that you’re bound to hit a few targets, even if you miss some others.

Babylon has some interesting things to say about Hollywood – many of which would still apply nearly a century later – and it’s often a visual masterpiece. But while there’s plenty to consume, too much of it feels like regurgitated leftovers. The over-indulgence of many of the characters is matched only by the self-indulgence of the director.

It’s an admirable and ambitious feat, but not entirely successful – judicious editing could certainly have improved it.