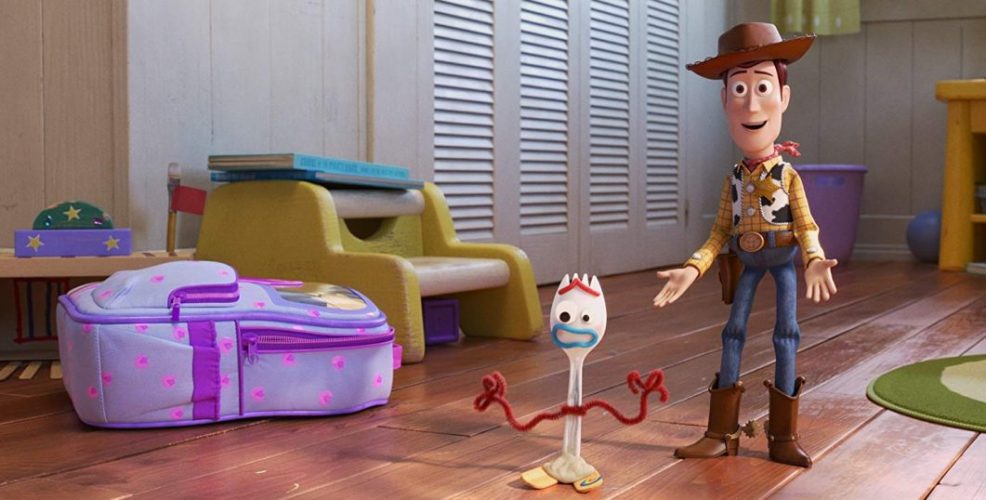 The cuddly cowboy Woody (voiced by Tom Hanks) and his fellow toys have moved on from the teenaged Andy and are living with young Bonnie, who’s just starting school.

On her first day at kindergarten, she comes back with a new toy; Forky (Tony Hale) is made from a plastic spork, a lolly-pop stick and some pipe-cleaner.

Woody realises that although Forky is literally made from a pile of rubbish, the newcomer is the most important toy to Bonnie now and it’s up to him – as the leader of the group – to protect him.

So when Forky disappears during road-trip, Woody takes it upon himself to set off to find him and bring him back to Bonnie.

It’s 24 years since Woody and friends first graced our screens. Most viewers even back in the mid-90s would already have been perfectly familiar with many of the toys, from Mr and Mrs Potato Head and Bo Peep to Slinky Dog. But now, there’s another generation of nostalgia heaped onto Pixar’s franchise, as children who saw it first time around could well be taking their own kids to see an expanded group of characters set off on yet another adventure.

But nostalgia gets you only so far and Disney’s Pixar takes you the rest of the way, delivering an entertaining story for the latest generation of youngsters as well as depth – in spades – for parents and even adults indulging in the guilty pleasure of going to see a cartoon unencumbered by children.

In truth, the story itself is rather pedestrian – toy goes missing, other toys set off to find it, meeting new toys and having adventures along the way. But the new cast of characters includes the requisite mix of creepy, warm, funny and useless; Keanu Reeves voices a motorcycle stunt-rider who was discarded by his owner as he couldn’t do the stunts demonstrated on the TV advert, Keegan-Michael Key and Jordan Peele voice a couple of fairground prizes who don’t want to be outdone by newcomers and Christina Hendricks is the voice of an antique doll who’ll do anything to replace her broken voicebox in the hope that children will want her again.

While kids will love the fast-moving fun, colourful characters and their action-filled antics, the satisfaction for adult viewers will come from the way that Woody and his friends learn and mature with each adventure – along with their growing understanding of their role in the world around them and their exploration of self-worth.

As confident as it is competent, Toy Story 4 won’t disappoint fans of the first three films. There’s a familiarity in narrative but a development of the themes, while never once dropping its guard and becoming complacent. Every step of the way, it works for your respect – and earns it.

While the previous films were very much ensemble pieces, with so many strong supporting characters to make the most of, there is a sense, here, that this instalment is more about Woody and a small core of characters rather than the wider cohort and many of your favourites are – literally – just along for the ride. His main sidekick, Buzz, appears to have been sidelined a little for the kick-ass Bo Peep, in the post #MeToo era.

While the feel of the film and quality of the animation is consistent with the earlier episodes, number 4 features adults in a way viewers won’t be used to.

There’s a freshness, simplicity and confidence in a franchise that simply ups the number each time, rather than trying to show off with a post-colon subtitle.

A key narrative point in the latest instalment of the franchise is the difference between toys with owners and lost toys without. Many of the lost toys yearn to have a kid, in much the same way as many adults do – turning a powerful emotional need on its head. Added to Woody’s insistence that its the job of a toy to look after its owner, the relationships at the heart of this film are every bit as profound as the relationships understood by adults in the real world. It’s always a pleasure to see a fun family film that seems to have more to tell us about relationships than most films about adult relationships.

This is supposedly the fourth and final outing for Woody and his friends – and if that’s the case, it would be a worthy end to a generation of ground-breaking entertainment – but many viewers who first experienced the wonder of Woody as a child and return to bring their own children to see  this film might relish the opportunity to return, once more, to see another adventure for the gang – as grandparents.