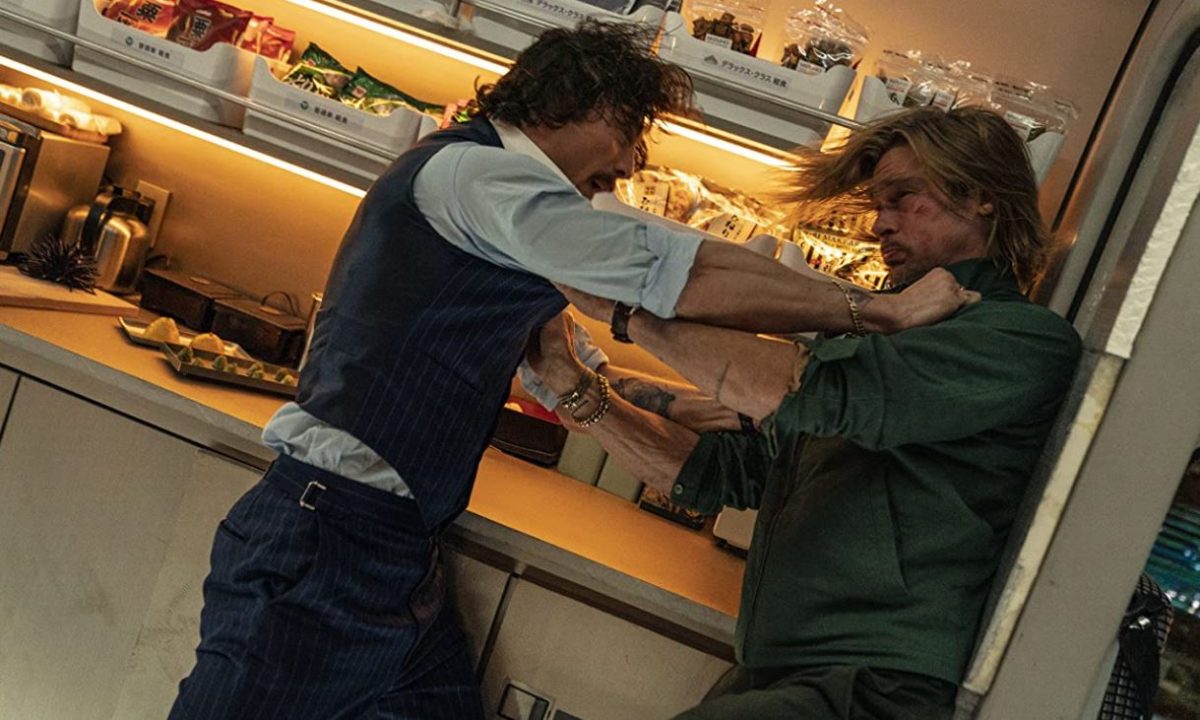 Hitman Ladybug (Brad Pitt) has been suffering a crisis of confidence. He thinks his bad luck is rubbing off on everyone around him and he feels bad about it. His handler Maria (I won’t spoil the cameo) tries to get him back into the game with an easy job; all he has to do is board the bullet train from Tokyo to Kyoto and steal a brief-case full of cash.

Another killer – a young girl nick-named the Prince (Joey King) – has lured Kimura (Andrew Koji) onto the train to help her kill the White Death; she has a henchman standing by to kill Kimura’s son if he fails to deliver.

Two other assassins, The Wolf (Benito A Martínez Ocasio) and The Hornet (Zazie Beetz) are also on-board, with their own agendas.

But with that many highly trained killers on the same train, you can be sure that to say sparks will fly is somewhat of an understatement.

David Leitch started out as a stunt double for Brad Pitt and now he directs the star in a raucous, bloody, action comedy.

There are twists and turns – in the plot, not in the route of the train – as the assassins go about their daily business without seeming to raise the slightest interest from any of the passengers – except in the quiet carriage, where the absurdity of one particular fight raises a few smiles.

If you imagine what might end up on screen if Quentin Tarantino collaborated with Guy Ritchie, you probably wouldn’t be too far wrong – gangsters whose names flash up on screen as they’re introduced, blood-letting on an industrial scale, dark comedy, arguments over their criminal monikers and some unexpected cultural references – in this case, one of the killers categorising everyone he meets as a character from Thomas and Friends.

Adapted from a Japanese novel, there’s a peculiar level of diversity on display, with most of the hitmen on this Tokyo-to-Kyoto bullet train being British, American or Hispanic – while the main gang-boss is meant to be Russian. And some of the accents are a little suspect – indeed, perhaps the worst English accent on display is peculiarly from Aaron Taylor-Johnson.

The plot is simply incoherent – the intertwined destinies of a group of apparently unrelated assassins is an interesting enough place to begin, but despite the training spinning along at 200mph, it just doesn’t go anywhere. It’s a one-way ticket to Nonsenseville.

They make a big deal of the fact that a character loses his ticket – a source of great humour, you might think, with a ruthless killer worried about riding the train with no ticket – but after the first stop, it’s all forgotten. In order to make sure Tangerine and Lemon aren’t pulling the wool over his eyes, The White Death sends his heavies to check up on them at each station – but why don’t they just take his son and the case of cash there and then? And if they’re so reliable, why weren’t they sent on the mission to rescue the son in the first place? There are various concoctions imbibed by different characters – which all take effect exactly when the plot requires.

Like the bullet train, the eponymous film takes you on a fast-moving joyride, moving in one direction – with the occasional stop for a flashback. With the film largely confined to the carriages of a speeding bullet train, the claustrophobia forces Leitch to mine his stunt background to push the creativity of the fight choreography – but also acts as a limiting factor, making some of the flashbacks feel like a welcome escape.

The journey is laced with humour and absurdity – much of it coming from Pitt’s charm and mantra-spouting insecurities and the Tarantino-Ritchiesque patter between the fruit-named “killer brothers.”

There are a handful of cameos – some overdone – others almost wasted – as stars pop in to do a favour for their mates.

It’s hugely silly, tremendously violent, totally pointless – but fun, to the point that you might even find yourself laughing out aloud from time to time – you’ll feel ashamed about it, but you’ll laugh.