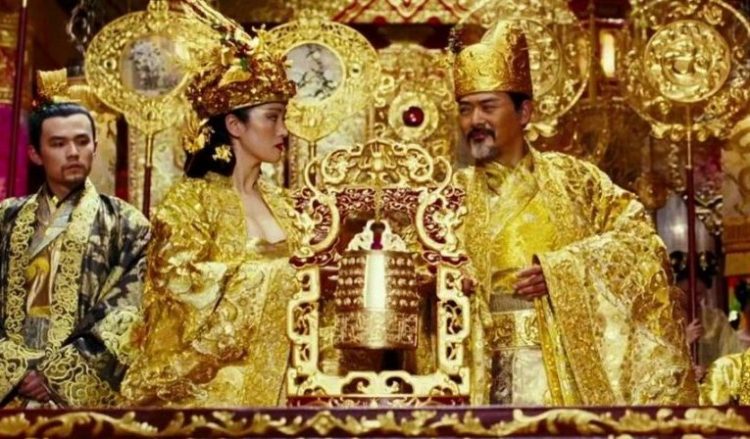 The courtyard of the tenth century Chinese Imperial Palace are filled with golden flowers as the Empress (Gong Li), the Emperor (Chow Yun-Fat) and their three sons are preparing to celebrate the Festival of Chrysanthemums.

Crown Prince Wan (Liu Ye) feels threatened when his braver, stronger and younger half brother, Prince Jai (Chou Jay) is recalled to the palace for the festival. But he’s more interested in his love affair with the doctor’s daughter than he is in power anyway.

When the Empress discovers that the Emperor has been having her medicine poisoned for the past ten years, she begins to plot her revenge.

As the festival draws closer, sibling rivalries, conspiracies and betrayals rise to the surface of the opulent but repressive family – bring the dynasty to its bloody knees.

Expansive sets, linked by palacial corridors whose gaudy colour-schemes wouldn’t have looked out of place in an early Almodóvar film and regal costumes and fashion accessories that would have V&A museum bosses weeping with jealousy almost guarantee this film Academy Award attention in the “presentation” categories.

But as a piece of story-telling, with a linear plot revolving around a relatively small number of characters and few surprises for the audience, it’s considerably less imaginative than its two forebears, Hero and House of Flying Daggers.

Billed, similarly, as a martial arts epic, this falls far short on the others here too, with only a handful of balletic fight sequences, most featuring black-clad ninja-like warriors, sliding into shot on ropes that appear to hang from nothing.

More than anything, it’s a grandiose family melodrama set against an historical backdrop that’s an undeniable feast for the eyes.

But thematically, it won’t challenge the more adventurous viewers who turn to such foreign fare for a more intricately plotted and choreographed piece of entertainment.

About the most elegant element of the film is a thick cloud of arrows being fired between warring factions, but a similar sight of even more impressive proportions was seen in the recent ancient Greek epic 300.