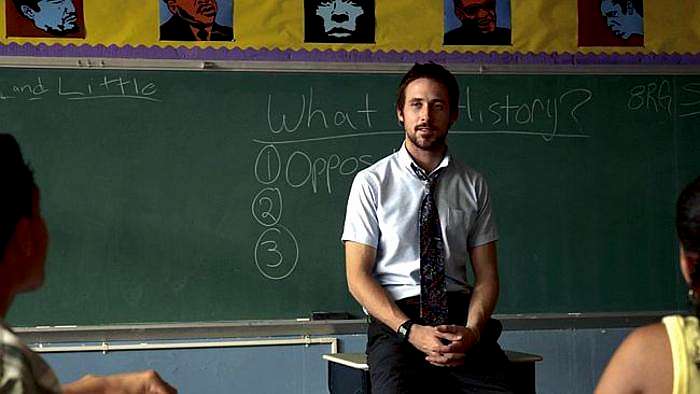 Dan (Ryan Gosling) is a history teacher in a tough Brooklyn school.

He’s one of those inspirational teachers who seem to exist only in the movies – I certainly never had one like him.

But he’s also one of those “do as I say, not as I do” kind of teachers – as becomes evident when, after school one day, one of his pupils, twelve year old Drey (Shareeka Epps), finds him slumped in a toilet cubicle, having had rather too much cocaine.

With this secret to share, the two develop an unlikely friendship – all the more unlikely as one of Dan’s main aims is to protect Drey from her drug-dealing friends.

The performances in this small and intimate film can’t be faulted – particularly those of the two leads, who deservedly picked up Independent Spirit Awards for their roles.

Of its type, the film is a well-made example, but as films go, how often have we seen a hip teacher trying to inspire his struggling pupils, despite battling his own demons as he does so?

But with an obviously low budget, it’s difficult to do anything particularly original and visually, you’re not going to come up with anything ground-breaking.

This is not a film for cinema-goers searching out something new – but if you’re interested in small dramas with a moral centre, with smart scripts and performances as powerful as they are real, this is for you.