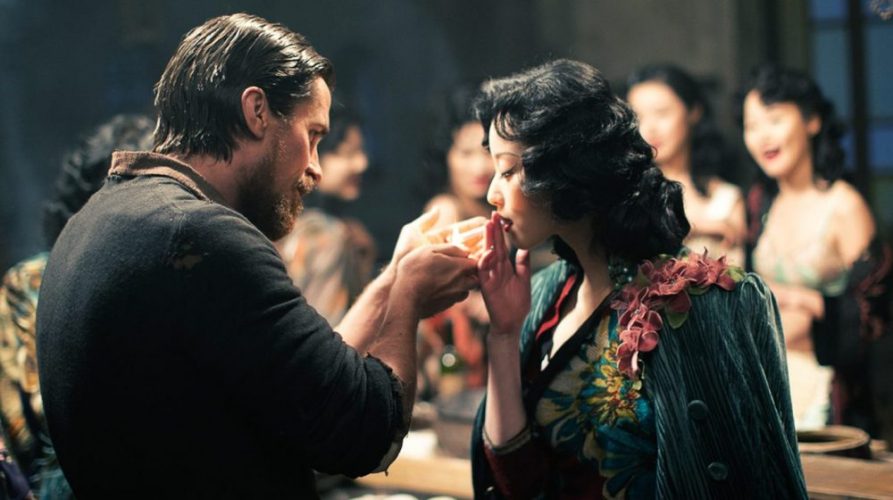 It’s 1937 and the Japanese are destroying the Chinese city of Nanjing.

When an American mortician, John Miller (Christian Bale), arrives at a cathedral to prepare the body of the priest for burial, instead of a dead priest, he finds a dozen teenaged girls and their choir-master hiding in the building.

An alcoholic, he helps himself to the church’s wine and plays dress-up in the priest’s robes, but when the children – desperate for a father-figure – turn to him for guidance, he’s not interested.

Not long after his arrival, a group of prostitutes from the local brothel turn up, seeking refuge from the fighting. Even before the judgemental choir-girls dismissively confine their new neighbours to the basement, John shows far more interest in the shrewd and glamorous courtesans than he does in the helpless, dowdy children. Surprise, surprise.

But soon, the Japanese troops come knocking and he witnesses their brutality first hand. This time, when the choir-girls and the prostitutes turn to him for help, he can’t let their cries go unanswered.

The godless wanderer is forced to grow up, confine his irresponsible past to the basement and rise to the challenge of putting others first, helping the vulnerable to survive and putting his own life at risk for the greater good.

There are several ways to view this film and it works to varying degrees on the different levels.

Coming from one of China’s most celebrated directors, Zhang Yimou, best known for the spectacular, Oscar-nominated Hero and House of Flying Daggers, it might be expected to be a visual treat and it meets this expectation with ease – although on a more modest scale. Never has a city being destroyed by warfare or young girls being brutalised by bayonet-wielding soldiers looked more elegant, bathed in gorgeous shafts of coloured light. The costumes – particularly of the prostitutes – are also stunning.

Seeing Christian Bale return, just weeks after his final appearance as Batman, this time as a very different kind of flawed hero finding the redemption he didn’t even know he was seeking, is interesting. His performance – central to this film working – is successful and for the actor himself, it will likely be a useful start in his undoubted desire to shake off the type-casting that Batman’s cowl threatens him with.

But the plot itself isn’t altogether convincing. Its simplistic structure is rather wearisome and predictable; it’s clear from the moment this cantankerous drunk is confronted with a group of children in need of guidance, he’s going to need to step up to the plate; it’s obvious that he’s going to be distracted by the bevy of beauties; of course his plan to save the girls won’t go as smoothly as he’d like; the supporting characters seem to come from central casting, each ticking all the boxes required to make the story unfold.

And having the mortician be American feels more like an attempt to sell a niche film to two markets than a truly believable narrative device.