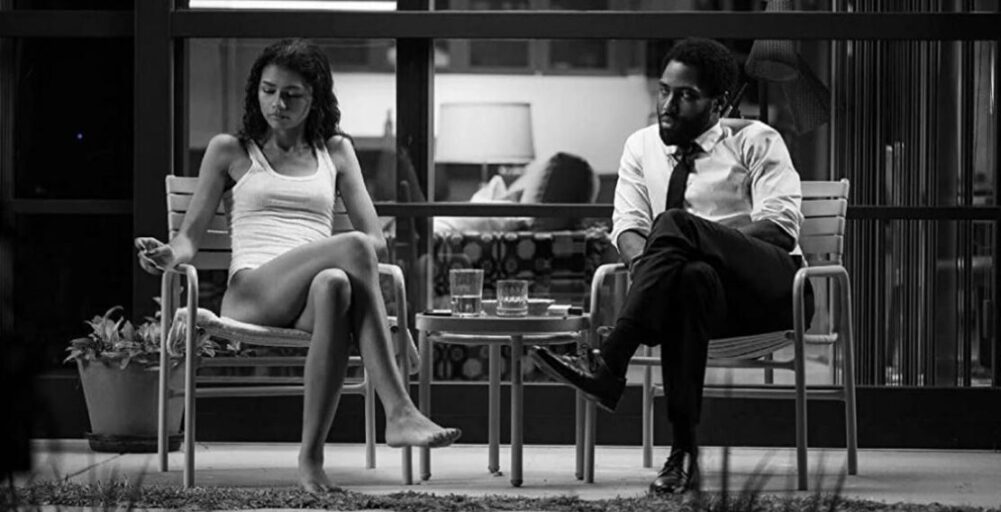 This should be the best night of screenwriter and director Malcolm’s (John David Washington) life, he tells his girlfriend during a blazing row.

They’ve just returned from the premiere of his first film and he forgot to thank Marie (Zendaya) in his speech.

She feels particularly deserving of acknowledgement, because she thinks that as a former drug addict, the film was about her. That’s not the way he sees it, listening all the other ex girlfriends who informed the lead role.

As an actress, she also feels a bit put out that he didn’t want to cast her in it. Loyalty aside, wouldn’t that have made it more authentic?

Malcolm takes a break from their argument only when he catches a glimpse of the first review; Marie points out that the reviewer loved it, but Malcolm takes exception to the assumptions made about the political message of the film.

The rather unimaginatively titled Malcolm & Marie is more of a film theory lesson than a film. Our lecturer – a film-maker who’s just premiered his first feature – informs us (via the only other individual on screen) that “cinema doesn’t have to have a message – it has to have a heart” – and that “recreating reality doesn’t make things interesting – it’s about your interpretation of reality – otherwise it’s a memoir.”

And just to get a little more meta still, this film by a white, Jewish writer-director features a black writer-director criticising a white reviewer for making assumptions about how his race informs his film-making.

In addition to exploring film studies, writer-director Sam Levinson also tackles relationship issues and the inherent insecurity of those who choose to bare their souls, both on screen and behind the camera.

It’s certainly thought provoking, particularly for students of cinema. The black-and-white photography is every bit as stylish as the house where the couple are staying – and the camera blocking makes for interesting viewing; we often find ourselves watching – and hearing – the action from a different room, for example. The soundtrack is also worked seamlessly into the narrative, with most of the songs being put on as background music during lulls in their heated discussions.

The film is unquestionably well made, but it lacks a heart; both characters are needy and selfish – neither is particularly likeable, although most viewers are likely to identify more with one than the other; personally, I found myself nodding most of the time Malcolm was talking and shouting “run away from this relationship” each time Marie piped up.

For a film about two people who don’t seem to like each other spending all night shouting at each other until they’re just too tired to carry on, this is probably about as good as this film cold be, but it doesn’t make for a compelling watch – especially since you’re not rooting for them to work it out.

Its almost hard to imagine why the relationship has lasted as long as it has, if this night is a reflection of what’s gone before.

While she accuses him of staying with her only for the creative inspiration, if this is the film that emerges from their mutually damaging relationship, you wonder whether it’s worth it.

From the first argument, you feel that they’d be better off without each other, and every word uttered from then on – however eloquent or profound – just rams home the point, making you feel that your time is not really being spent any better than theirs.

Despite Washington’s valiant efforts, this is very much a film for the head, rather than the heart, which kind of goes against his own character’s film theory.