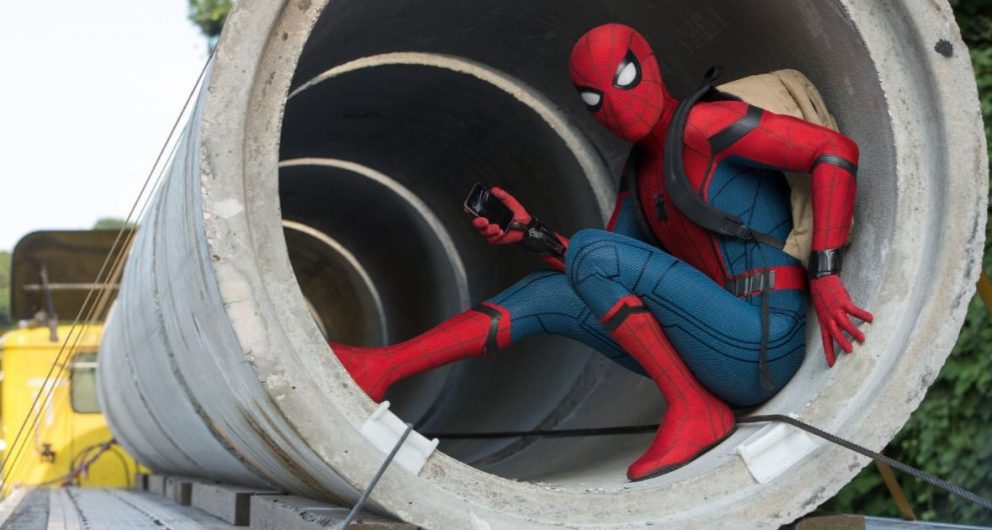 At the tender age of fourteen, young Peter Parker (Tom Holland) had been picked by Tony Stark (Robert Downey Jr) for a mission with The Avengers; he donned a high-tech Spider-Man outfit, as many might have seen in Captain America: Civil War.

Some months later, Peter is trying to persuade Stark that he’s worthy of full membership of The Avengers, by being a “friendly, neighbourhood Spider-Man,” fighting crime – and giving old ladies directions – in his local community.

When he catches a gang trying to sell hi-tech alien weapons to petty criminals, he sees his opportunity to impress Stark.

With the help of his school-mate Ned (Jacob Batalon) he pursues a new super-villain known a The Vulture (Michael Keaton), whose alter-ego saw his salvage business run into the ground when Stark formed a government agency to take over his work.

But in addition to trying to bring The Vulture to justice and impress Tony Stark, like many other teenaged boys, Peter is trying to woo a girl at school – Liz (Laura Harrier) is an older, rich girl who shows no interest in him at all until Ned lets slip that – well – he might know Spider-Man.

It’s only 15 years since Sam Raimi brought Tobey Maguire’s Spider-Man to the big screen for the first of three outings. Ten years later, the franchise was rebooted with Marc Webb putting Andrew Garfield in the lead role. Both teams took us back to the beginning, introducing us to a troubled high-school nerd, who develops arachnid-type behaviour traits, after being bitten by a radio-active spider.

It’s only three years since Garfield’s second outing and already we’re seeing another reboot – but this isn’t just a retread of the same material. This is a wholesale hostile takeover by another franchise – The Avengers – as Marvel takes back shared-ownership of one of its most prized possessions, which was previously the exclusive property of Sony.

This free-standing Spider-Man film also features a troubled teen nerd but this time, we don’t see how he becomes the eponymous hero – not least because avid fans of the wider franchise will already have seen him in last year’s Captain America: Civil War.

In a sense, for anyone who didn’t see that, this makes it feel a bit like you’re jumping into a new franchise halfway through; what made him special – indeed is he even special? How do the spider-powers work in this world. When Tobey Maguire and Andrew Garfield made their debuts, their characters knew as little about the process as we did and we got to learn with them – that was part of the fun. But unlike his predecessors, Tom Holland’s DNA doesn’t seem to have been fused with that of a spider; he doesn’t seem to have the biological ability to sling webs – that’s done by a gadget that anyone else could use if they could get their hands on it. There’s a point in the film when Peter Parker tells Tony Stark that he’s nothing without the gadget-laden suit he’s been loaned by Stark Industries – and it certainly does seem that he’s not a super-hero, he just has a cool costume. In the earlier versions, the costume was home-made – with a bit of help from a kindly elderly Aunt May; this time, his guardian is a much younger, sexy Italian (Marisa Tomei), while the laboratory-produced suit is only one gadget short of Stark’s own Iron Man outfit.

There’s no doubt that with the Marvel Movie Machine behind it, Spider-Man: Homecoming delivers a constantly exciting thrill-ride with plenty of laughs, but it lacks the emotional heft of the previous reincarnations of the character. Tobey Maguire’s first outing was almost as much a romantic drama as it was a super-hero thriller, with a deftly handled and thoroughly believable will-they-won’t-they going on, with a long-awaited kiss providing a huge catharsis. But this time, when we first meet Peter, he’s just 15 years old – far too young for many in the audience to be rooting for him to get together with a senior who never even noticed he existed until someone else mentioned that he knew Spider-Man. They have no history – or even present – and there’s something uncomfortable – even queasy – about wishing them to hook up.

The narrative is also frustrating at times – with convenient plot points, inconsistencies or exposition to nudge it all along.

Younger audiences, less troubled by the back-story or the heart of the narrative, will be satisfied by the traditional super-hero scenes and some laugh-out-loud moments, but their parents – while rewarded with a handful of gags aimed at older viewers – might find themselves wishing they’d covered the children’s ears – or facing some awkward questions. And some of the best gags are Avengers in-jokes, which – again – excludes Spider-Man fans who have not committed to give Marvel every penny they earn by seeing every single entry in its Cinematic Universe.

Tom Holland is effective enough in the role, although not as emotionally mature or interesting as his predecessors – but that’s more down to the writing than his acting – while Robert Downey Jr is on typically fine form with his fast-tongued delivery seeming so natural that it’s almost hard to believe that a screenwriter got to the words before he did. Michael Keaton, too, is fun, as an otherwise good man who became a villain only because those others regard as the good-guys screwed him over – his performance recalls his own turn as the DC superhero in Tim Burton’s first Batman and indeed his more recent turn as a has-been super-hero actor in Birdman – a concept not dissimilar in appearance to his Vulture.

While it’s a generally entertaining film, it’s a franchise that – three years on from its most recent standalone outing – didn’t need – and doesn’t particularly benefit from a reboot. And for what purports to be a standalone film, it could not possibly exist outside the Avengers world, making it feel like a misnamed entry in the Marvel Cinematic Universe. The crux of the plot itself is about a boy trying to get into the Avengers – a lovelorn teenager whose only powers seem to be derived from a suit that’s made for the Avengers – a gadget-heavy suit that happens to have a spider embroidered on the chest. Might I suggest that for the DVD release, they cut the so-called romance, tone down the adult gags and rename it Avengers: Internship?