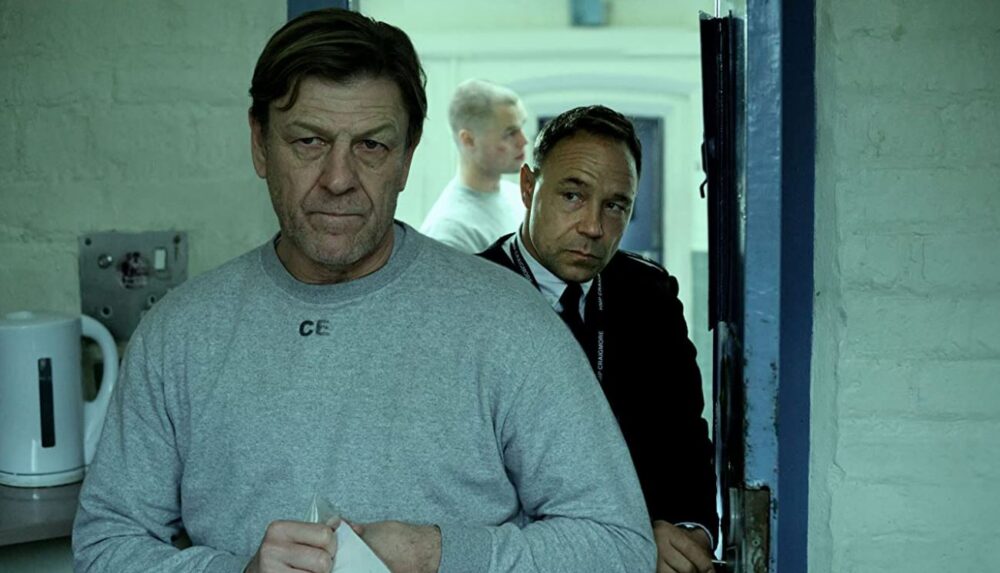 Mark Cobden (Sean Bean) is a teacher. Well, he was a teacher, until he knocked down and killed a cyclist after driving home, drunk.

First-timers are ripe targets for bullying – not willing or able to fight back, not brave enough – or stupid enough – to report the bullies.

But he has his own problems; longtime prisoner Jackson Jones (Brian McCardie) rules the roost and he’s found out that Eric’s son is an inmate in another jail. Eric is told that his son will be beaten up unless he smuggles drugs into Craigmore.

As Mark tries to bide his time, building alliances as he tries to keep out of trouble, Eric gets sucked deeper into Jones’ web of unpunishable crime.

You wouldn’t expect a romantic comedy from Jimmy McGovern, but you need to be made of stern stuff to get through this grim but compelling mini-series. Arguably, it’s almost as hard to watch for us as it is for the convicts to do their time.

It’s three hours of downbeat, frightening drama that might just convince someone teetering on the brink of a life of crime to come back from the edge.

But one of the most striking things about McGovern’s analysis of the prison system as that not everyone behind bars is a criminal, per se – many are good people who made a stupid mistake and pay for it for years.

That’s not to say that accidentally killing a cyclist is forgiveable – but is it right for society to treat the motorist the same way it would treat a serial armed robber or child abuser?

Many of those in the sidelines of this story are killers – but not long-time criminals, killing rival gangsters or sadistic abusers – people who’ve been challenged to a fight – and won, for example.

Learning of the motivations of some of these inmates doesn’t make you accept that some killings are justified – far from it – but it does highlight the fact that anyone with a temper – or a weakness – could find themselves on the wrong side of the law – and will find themselves treated the same as people who’ve set out to do others harm throughout their lives.

The writing is powerful – thought-provoking when you have a moment to take a breath – although for most of the time, it feels like two separate stories intertwined, Mark’s and Eric’s, rather than there being any particular coherent strand linking the two protagonists.

The individual performances from the leads are gripping – in both cases – as Sean Bean’s Mark tries to survive and atone in this hell-hole, while Stephen Graham’s Eric tries to hold everything together as he puts his son’s welfare ahead of his professional principles – another example of a good man, brought down by bad decisions, beyond his control.

It’s heart-breaking to watch people who are good at heart being beaten to a pulp or manipulated against their better judgement, and being unable to do anything about it, because the real bullies are the ones with real power.

But powerful, effective and thought-provoking as it is as a TV drama – and easily manageable as it is in just three one-hour episodes – there’s only really half a message here; life for prisoners is undoubtedly unmanageable for most people – but what’s the alternative?