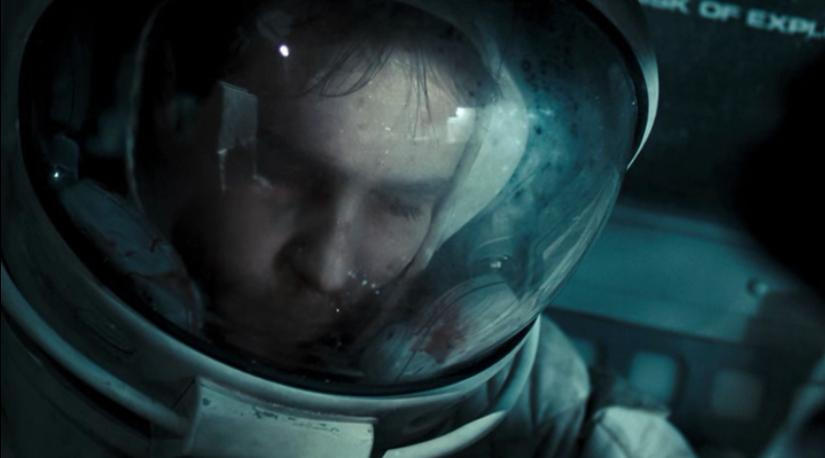 Astronaut Sam (Sam Rockwell) is just a couple of weeks away from the end of a three year solo-mission at a moon-base, overseeing the mining of a material that provides cheap and clean fuel back home on Earth.
Apart from a robot, Gerty (voiced by Kevin Spacey), the only communication he has with anyone else is recorded messages he sends home and the long-delayed recorded responses from his wife, telling him how much she misses him and can’t wait to see him again soon. The direct communication link to Earth has long since been broken and the company hasn’t got around to fixing it.
Sam can’t wait to get home. He needs to get home. He’s beginning to feel unwell. He’s seeing things. Three years of solitude is taking its toll.
One day, he sets out in a lunar vehicle to carry out some maintenance at the outer reaches of his compound. He crashes his vehicle and bumps his head.
Sam stirs in the infirmary, being nursed back to health by Gerty, who informs him that he’s been in an accident – an accident he doesn’t remember.
As he regains his strength, Sam begins to suspect that all is not quite right and when he sets out to investigate the scene of his accident, he’s shocked at what he finds.

With a solitary man, accompanied in space by no-one but a robot, this film has drawn comparisons to Silent Running, giving it a lot to live up to, and it doesn’t disappoint, if this genre is your thing. It’s a fine attempt at an original and thought-provoking science fiction film.
The film explore some interesting avenues, which I won’t outline so as not to spoil the fun of trying to work out what’s going on – but suffice to say that Rockwell delivers not one, but two believable, sympathetic and complimentary performances.
Even when the twist is revealed, the film remains coherent to its beginnings and there is still intrigue and uncertainty as to how it will be resolved.
The film also serves as a futuristic parable of one man against a giant corporation – a tale made all the more chilling by virtue of the fact that the man the corporation he’s fighting are hundreds of thousands of miles apart and all the communication lines are down.
Once it’s clear what’s going on, it could be argued that the conceit is a little contrived – I’m not entirely sure that if I were running a huge money-making, multi-planetary conglomerate, I’d choose the same way to run the operation as they do – but in this world, it’s at the very least acceptable.
There’s a sense in which this British production (writer/director and most importantly money) looks to be fairly low budget – pretty much one actor, one interior location and one exterior location – the exterior sets look too much like children’s toys, but the interior production design is as impressive as anything else in the genre.
For the film to remain so gripping with so few people doing so little for so long is something of which first-time feature director Duncan Jones should be proud.