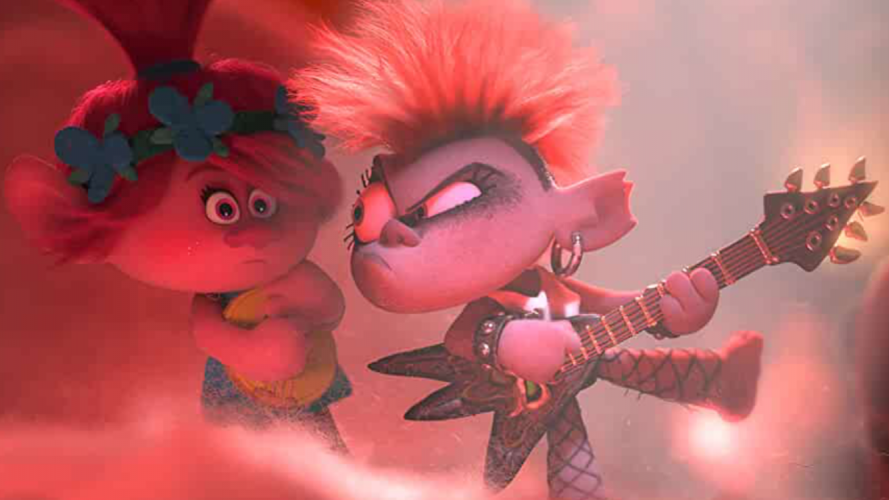 In this follow-up to the Oscar-nominated 2016 musical animation Trolls, Queen Poppy (Anna Kendrick) discovers that her trolls are just one of six tribes across the world; the main thing that divides each group is their taste in music.

Queen Poppy rules the Pop Trolls, but she’s just learned that Queen Barb (Rachel Bloom) of the Hard Rock Trolls is touring the world to try to unite all trolls under her music.

But Poppy sets out to try to win around the Country, Techno, Classical and Funk trolls to her ideal of living together in harmony, retaining their identity while sharing their music with each other.

Trolls World Tour is the first major studio release – a Dreamworks film released by Universal – to go straight to Video On Demand during the global Coronavirus lockdown, while other blockbuster titles – including Bond’s No Time To Die – have opted for a new theatrical release date later in the year.

With the lockdown coinciding with the Easter Holidays, with children round the world stuck at home, Universal’s strategy could well pay off; it’s certainly in a position to make the most of the small-screen audience, as cinema-goers are otherwise left with mostly low-budget titles that would have ended up On Demand from the outset anyway.

And for anyone trying to entertain primary school and pre-school kids, you can’t really go wrong with Trolls World Tour – a lively, colourful and musical tale of togetherness overcoming division.

Adults might feel that the saccharine message is somewhat forced down your throat, courtesy of a naive optimist, against the better judgement of her more realistic sidekicks, but there is – at its heart – an interesting debate to be had between, on the one hand, eliminating difference so that we can all be the same and allowing diversity to thrive in an equal society. They even touch on the notion – explored for the same age-group in Dr Seuss’s The Sneetches – that if everyone is the same, how can you tell who’s the best?

There is also some knowingly simplistic discussion about how pop music is meant to make you feel, compared with how pop fans might perceive country music.

While feeling a little put out that my preferred choice of listening – guitar-based rock – is presented, here, as the power-hungry villain, the story cleverly suggests the idea that back in years gone by, another tribe essentially tried to do the same thing, forcing their music (read “beliefs, culture and traditions”) on others, which is what caused the division in the first place.

The subtext of the film plays like a sixth-form sociology essay, with some interesting things to say about society – and music – but these messages will go right over the heads of the youngsters, while the story at its heart will be of no interest to the parents, but although there are essentially two separate films to be watched, there’s still something for parents and kids alike. There’s just not that much that will engage both at the same time.