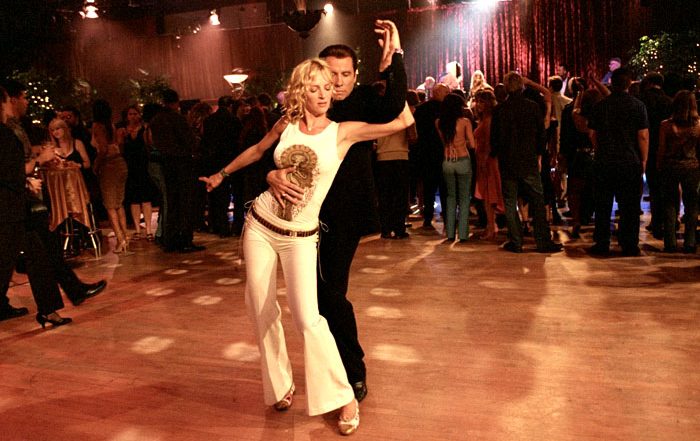 The hardman-turned-movie-mogul we met in Get Shorty, Chili Palmer (John Travolta), is bored of the film business. While music producer Tommy (James Woods) is pitching him a film idea, he’s gunned down by Russian gangsters.

Chili sees this as his way into the music business, hooking up with Tommy’s widow Edie (Uma Thurman). Together, they poach an up-and-coming singer from her eccentric manager Raji (Vince Vaughn) and his gay bodyguard Elliot (The Rock). Unsurprisingly, this doesn’t go down well with Raji’s boss Nick (Harvey Keitel).

Meanwhile, rapper Sin (Cedric The Entertainer) calls in a debt Tommy owed him and the Russians have unfinished business too.

Everyone seems to be trying to take everyone else’s money – or their lives – in what’s less of a showbiz satire than a farce.

The plot is deliberately so complicated, that rather than even think about who’s after what from whom, we just have to sit back and let the comedy wash over us.

But worse than the overly complex criss-crossing of the vendettas, the story lacks any coherence. The film-makers seem to have less of an understanding of the music business than Chili Palmer — which is odd, considering at least three professional singers are among their number.

Cedric the Entertainer making pancakes for his daughter before popping outside to beat someone half to death is one of the few comic moments that actually works — most of the attempts at humour are corny, childish and fall flat — or at least far short of the smooth wit of Get Shorty.

The film is built around caricature, rather than believable characters, with most of them proving to lack originality or worse, proving to be downright irritating.

Travolta is pleasing enough to watch, although he’s a pale imitation of his previous incarnation of the role, and his reunion with Pulp Fiction co-star Thurman has none of their previous sizzling chemistry, even on their return to the dance-floor.

It’s a disappointing waste of a hugely talented cast, appealing only to the post-pub audience. It’s not big, it’s not clever and the only thing cool about it is the response it should get from the public.