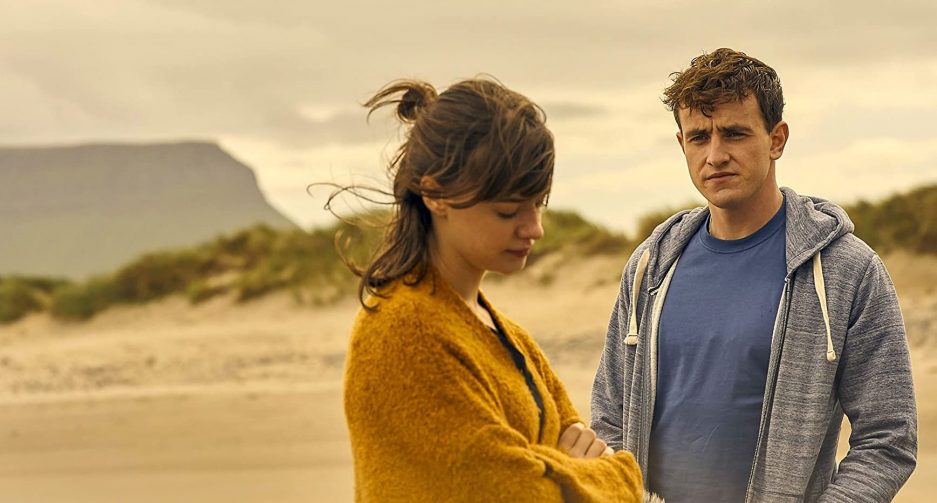 In the small Irish coastal town of Sligo, Marianne (Daisy Edgar-Jones) is a pretentious teenager with few friends at school. She thinks she’s better than her teachers and most of the other pupils. But she has an eye for the school’s sporting hero Connell (Paul Mescal) – and it seems he likes her too.

Although they’re in the same class, they’ve got to know each other because Connell’s mother is Marianne’s cleaner.

Connell is concerned about what the cool kids will think if they find out he’s dating the cantankerous and self-important swot, so – without using those exact words – they agree to keep their relationship a secret.

But this proves problematic when the school-leavers’ prom approaches.

The pair end up at the same university in Dublin, where Marianne has become Little Miss Popular, while Connell – struggling to pay his rent among his wealthier contemporaries – finds himself as the outsider.

Normal People – based on Sally Rooney’s novel of the same name – follows the couple through their late school and early university years as the pressures of life around them help and hinder their relationship.

Over twelve half-hour episodes, Lady Macbeth and Succession writer Alice Birch takes the characters from Sally Rooney’s Costa Book Awards Best Novel on a twisting and turning journey through early adulthood as they learn about the responsibilities that come with love, loyalty and friendship.

During the period of the series, they fall in and out of love – with each other and others – while they have to deal with difficulties within their own families back home; Marianne has very uncomfortable relationship with her mother and brother, while Connell’s mother is so empathetic, she finds herself siding more often with Marianne than her own son.

There are no father figures on either side of this story.

Given its six-hour running time, this isn’t very plot heavy – it could probably have been squeezed into a single feature film without losing much – in fact, it could’ve gained a little from picking up the pace a bit. Or some of the time could have been used to explore the class differences that might have been expected to push the pair apart – why set up a potentially interesting dynamic and then largely gloss over it?

And while it feels slow, at times, when things do happen – often as episode cliff-hangers – they don’t always feel convincing.

The target audience will be teenaged and as inexperienced in life and love as the protagonists, but the more mature viewer looking for something to pass the lockdown might groan with frustration at some of the decisions the pair make, sending their relationship into tailspin after tailspin, often completely unnecessary except to propel the story into the next episode.

The production team can’t really be blamed for narrative failures when they’re adapting a book, but one has to wonder how a novel that disrespects the intelligence of its main characters can have been so well received.

The sex scenes are gently intimate and feel honest and much of the drama is compelling. Both Marianne and Connell are likeable enough for you to want it to work out between them – and to make you come back for the next episode. One of the best things about Normal People is its half-hour running time, which certainly makes it easier to squeeze in an episode here and there – as well as binging a few in one sitting.

But rather than feeling sorry for the pair when things don’t go so well, the overwhelming feeling for many might be that these people are not so much normal as naive, immature and a little more stupid than their academic status might suggest. The denouement – as much as anything else – fits this frustrating description. But Naive, Stupid and Immature People wouldn’t be such a catchy title. And in truth, if these people were really normal, why would anyone want to spend six hours of their lives trying to engage with people who are less interesting than themselves?

When Marianne and Connell aren’t grabbing each other, you’ll want to grab them yourself and give them a little shake to help them come to their senses.

I haven’t done many TV (or I suppose I should say streamed-content) reviews – partly because with episodic shows, I was never clear whether it was best to review a series after only the first couple of episodes or to wait until the end, but with an increasing number of streamers dropping the whole series at once, in many cases, there’s no such question. The world of binge-viewing, it turns out, has also spurned a world of binge-reviewing.