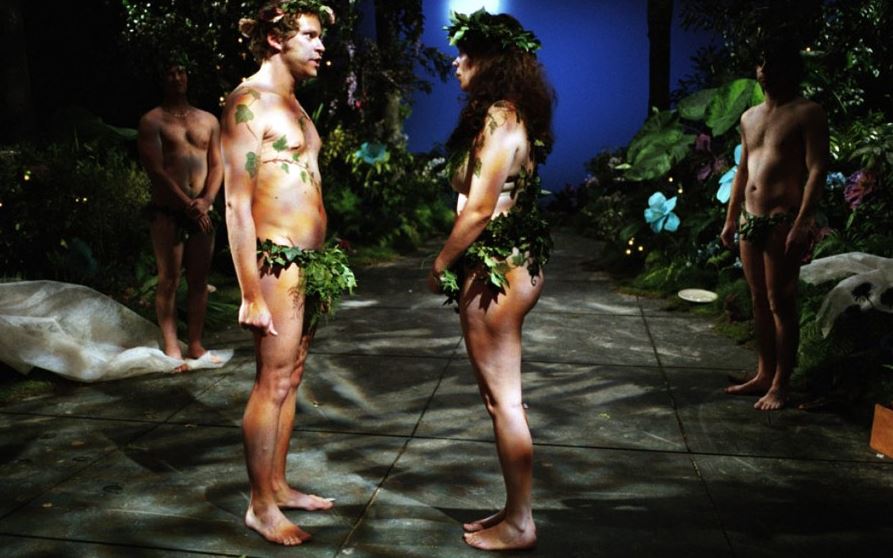 The struggling bridal magazine, Confetti, decides to boost its sales by staging a competition, picking three couples to have the most “original” wedding.

After rejecting dozens of couples whose plans are just too whacky (isn’t that what original means?), they settle on two would-be stars of 1940s Hollywood musicals (Jessica Stevenson and Martin Freeman), a pair of tennis nuts (Meredith MacNeill and Stephen Mangan) and a couple of naturists (Olivia Colman and Robert Webb) who plan to tie the knot in the nude.

Into the mix come the campest couple of wedding planners since Sex And The City’s Anthony Marantino, bringing with them the full stereotypical range of predictable, unoriginal and mindlessly easy gags.

A couple of years back, BBC Films announced that it was moving away from its staple of bigger budget period pieces, in favour of making more use of Britain’s TV comic talent.

True to their word, for this endeavour, they’ve plucked actors from The Office, Spaced, Green Wing and Peep Show – among others – but they’ve forgotten one thing – any good film needs, first and foremost, a good script.

The actors clearly had immense fun as they improvised around the theme of surreal wedding japes, but stop for a second – we’re grown-up cinema goers – we’ve seen every single one of these gags before – we can see every one of these actors on a daily basis in our own living rooms, being much funnier and more original than they are here. Why on earth would we want to leave the comfort of our homes and pay the best part of a tenner to see them doing something less funny, witty and original than we’re used to on the big screen?

OK, so it’s meant to be a comedy, so perhaps I shouldn’t get too analytical about this, but surely the plot must still stand up to scrutiny. It doesn’t. The basic premise is disappointingly shallow, astoundingly contrived.

A magazine wants to stage the three most “original” weddings, yet such ideas as underwater weddings are dismissed as too whacky. Then there’s one of the main running jokes of the film – the magazine doesn’t want the naturist couple to get married in the nude – so why pick them in the first place? That’s what naturists do!

The “Gilbert and George”-like wedding planners, while amusing at times, are so stereotypical that any viewer could have written every one of their overtly obvious and simple gags.

You will laugh at this film, but the little effort expended in producing it hardly warrants or deserves much commendation.

With the best will in the world, I regret to advise people to steer clear of this childish mess, in the hope of discouraging BBC Films from taking this unimaginative, cheap, easy, banal and obvious route in future.

The British film industry is blessed not only with access to fantastically talented actors; it should – and must – draw on its equally talented supply of comic writers, to ensure that the actors aren’t left flailing – the most disappointing thing about this film is the complete waste of such a vast pool of creative talent.