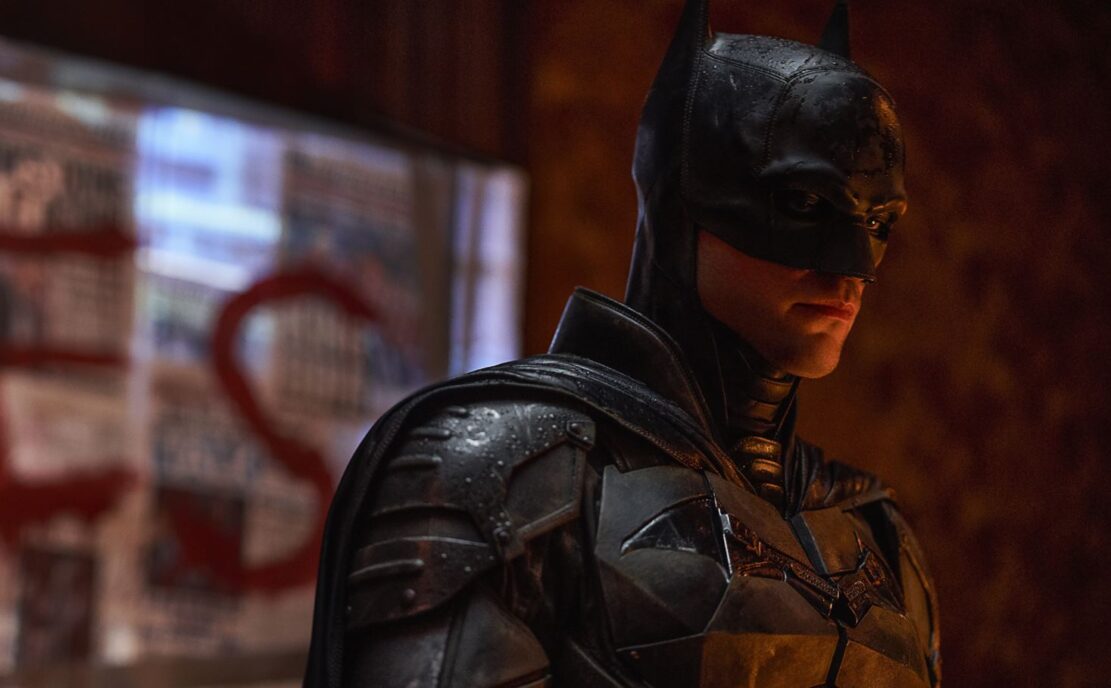 It rains a lot in Gotham City, which is quite fitting for the crime-ridden sewer that it’s become.

For the past two years, a masked and caped vigilante, calling himself The Batman (Robert Pattinson) has been doing his best to clean the streets of back-alley drug dealers and low-level criminals – he says the “bat sign” that calls him out is as much of a signal to the gangsters as it is to him.

But he’s not making as much progress as he wants, and deep down, he knows why.

Now a new villain has arrived in town and is targeting those he claims are the most corrupt of all – the mayor, the chief of the police and the District Attorney. The Riddler (Paul Dano), as he calls himself, leaves a note to The Batman at each crime scene, providing him with clues to solve the mystery.

As each attack brings The Batman closer to revealing The Riddler’s identity, tension is rising among the public, the authorities and the underworld bosses who’ve benefited for years from the complicity of the justice system.

But it’s only once The Riddler is safely locked up behind bars that he reveals the true target of his anger and unleashes his most devastating assault on the city.

Another Batman? Apparently, this one is THE Batman. Accept no substitutes – except of course, Ben Affleck, who was originally supposed to be in this film, Christopher Nolan’s brooding Christian Bale, Joel Schumacher’s camp George Clooney and Val Kilmer and Tim Burton’s wry Michael Keaton, who – in fact – is about to return to the role, after 30 years, for the DC Extended Universe – outside which this film sits. With a sequel to this film signposted – and almost certain – we’ll have two rival Batmans in two rival universes running concurrently.

But while the DCEU films tend to be colourful crowd-pleasers to rival Marvel’s own cinematic universe, Matt Reeves has opted out, giving him the freedom to deliver another thoroughly dark take on the caped crusader.

For much of this film, it’s more of a crime thriller – a murder mystery – than a superhero adventure. There are no superpowers in sight – unless riddle-solving is a super-power – either from the Batman or his foes, and interestingly, the way the plot is structured, the Riddler regards Batman as more of a collaborator than a foe at first.

Robert Pattinson’s Batman is more of a private detective, in a cowl and cape, rather than fedora and mac, than he is a typical superhero. We see less of him fighting criminals than we do watching him help Gotham Police Lieutenant Gordon (Jeffrey Wright) investigate a series of high profile assassinations, by a killer who wants to keep Batman in the loop. Batman is a self-proclaimed vigilante, whose aim is to get criminals off the street. The Riddler, too sees himself as a vigilante, but he sets his sights higher, trying to get criminals out of their offices.

As Pattinson ponders each clue, you can almost imagine Adam West gazing upwards and stroking his chin as he considers his next move. But Pattinson’s Batman is more Christian Bale than Adam West – or indeed Michael Keaton or even Ben Affleck. He’s a tortured soul, but with no backstory, and only the assumption that we all know he was orphaned when someone murdered his parents in front of his eyes, we don’t really know who he is or why – or how – he does what he does. This isn’t a problem, per se, but it does limit the emotional connection viewers can make with the central character.

It’s not even clear who his sidekick Alfred (Andy Serkis) is and how he came into the picture. He certainly doesn’t act like the butler we’re used to and he’s not old enough to have brought the young Bruce Wayne up after the murder of his parents.

Bruce Wayne himself appears only once or twice in the film, which is perhaps an interesting decision; why cast a heartthrob like Pattinson in the role if you’re going to keep him covered up for most of the three hours. Similarly, Colin Farrell is under so much make-up as the Penguin that you feel they could have just cast an uglier actor and halved the make-up budget.

But that said, if a film is called The Batman, you probably want more of the Batman than Bruce Wayne anyway, and even if the villain is one of the comic-book villains who actually wants to be caught – who needs to be caught – it’s still a tense ride with a thrilling conclusion – eventually. And the narrative never lulls – for the full three hours, if this is your kind of thing, you’ll be gripped.

This is film noir – both literally and figuratively. It’s a black film – shot almost entirely at night, within the shadows, almost entirely black and white. And it’s thematically dark, full of corruption and betrayal, murder and revenge. Then its packed with the film noir staples; a gritty crime drama centred on a loner detective hunting a killer, with a mysterious femme fatale at his side – in this case Zoë Kravitz’s cat-burgling Catwoman – never quite certain whether she can be trusted or not.

It can be physically difficult to watch at times, from the darkness to the fact that almost every exterior takes place during a downpour, and we don’t have the luxury to reach out and wipe the rain off the lens. And what other footage isn’t shot through a rain-soaked window comes from mobile phones or secret cameras.

And while the cinematography often feels claustrophobic and grimey, the film as a whole has a gritty and grungey feel – so grungey, in fact, that not content with simply featuring Nirvana’s Something In The Way within the first act, the song is woven through the entire score.

Like a winter’s night, The Batman is long, dark and cold. And while there’s little new to be found within its three hour running time, it’s gripping enough that when you see a not towards another familiar Batman villain, as the credits begin to roll, you can’t wait to pass another long winter’s night with the caped crusader.

It’s pared back to the bone, almost economy Batman – no glitz and glamour of a famed billionaire, almost no gadgets, a Batmobile that’s little more than a souped-up car. No frills, but plenty of thrills.