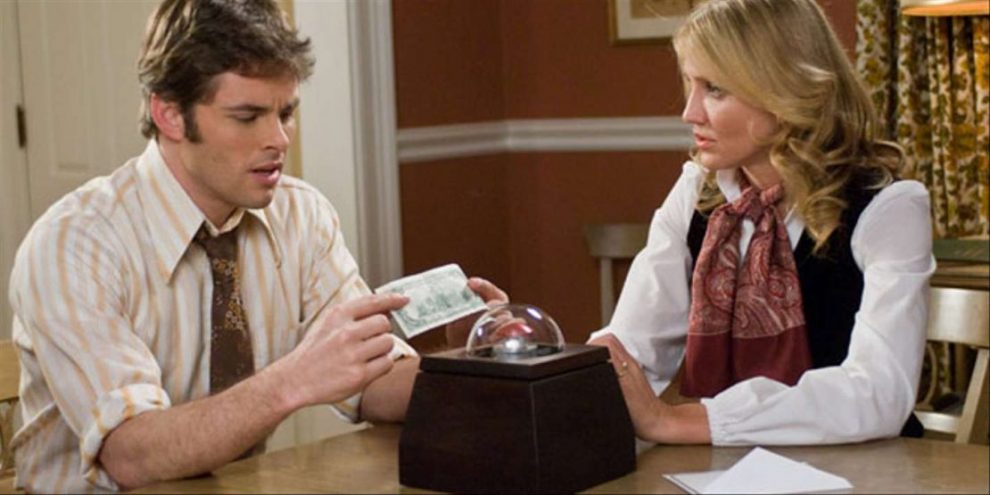 The private school where Norma teaches stops offering free education to the children of staff and NASA engineer Arthur is rejected from the space programme when he inexplicably fails a psych test.

With the couple at their lowest ebb, they’re presented with an intriguing proposition when a mysterious box is left on their doorstep. Inside is a big red button, under a locked, glass dome.

A dapper gentleman, with half of his face missing, Arlington Steward (Frank Langella) turns up and explains that if they press the button, two things will happen. They’ll get one million dollars in cash (this is the 1970s, remember) – and someone they don’t know will die.

They have twenty four hours to decide.

Arthur examines the box. Norma examines their desperate finances. As their deadline approaches, without consulting Arthur, Norma slams down the button and waits.

The pitch is fascinating – would you press the button? A million dollars in exchange for the death of someone you don’t know?

Based on the short story Button, Button, by Richard Matheson – who also wrote I Am Legend and Stir of Echoes, among others – it has so much potential.

The pity is that in the hands of a director who started so promisingly with Donnie Darko and then destroyed his own reputation with the dreadful Southland Tales, this is a frustratingly pointless, incoherent mess.

In so many ways, this film follows the path of a typical mystery film before veering off and misleading you. To engage an audience with a mystery, you have to make it worth their while following your breadcrumbs.

Throughout, it will drop not clues but red herrings.

You’ll wonder why the characters – when offered apparent explanations for the mysterious happenings won’t then follow them up. There are knowing looks between creepy crowds of extras, people get inexplicable nose-bleeds, the revelations of characters’ backstories pose more questions than they answer and when the idea of Martians is raised, it all gets a bit too much.

It’s slickly made and certainly creepy at times, but it’s a devastating shame that a pitch that sounds like it can’t fail has been padded out to nearly two hours with so much nonsense as to damage the reputation of the author.

He’ll soon be thanking his lucky stars that the film-maker’s changed the title of his book.

As for Richard Kelly, who burst onto the big screen with such aplomb with the grippingly complex, but coherent Donnie Darko, it’s so sad to see him turning his confidence into complacence – he’s fast becoming the next M Night Shyamalan.

He needs to stop pushing the wrong buttons.