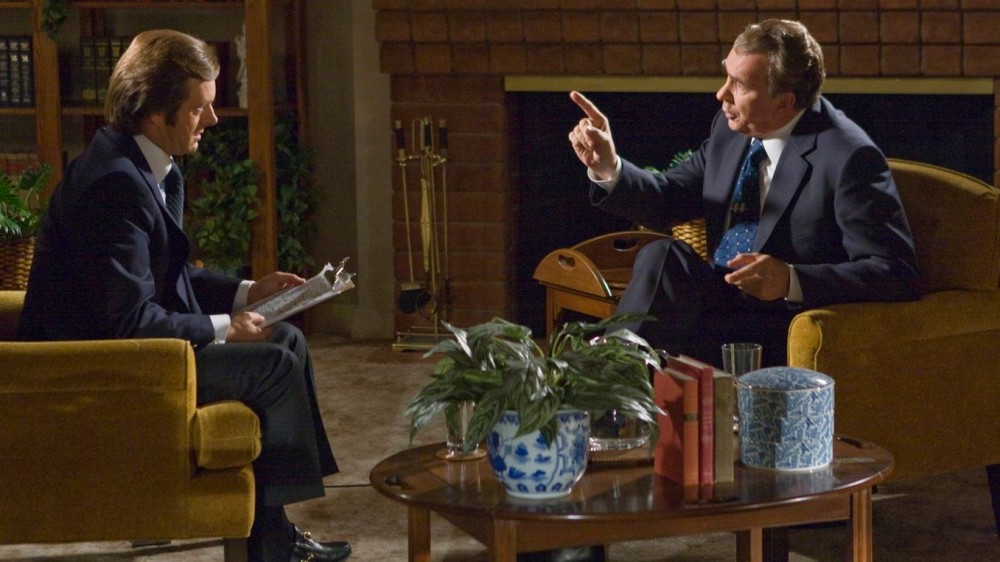 We’ve just said goodbye to an American president who really divided the nation. Arguably one of the few presidents to have left power under more of a cloud was Richard Nixon (Frank Langella), who you’ll know – if you’re old enough – or if you’ve seen films like All The Presidents’ Men – got himself in a bit of bother over a raid on his opponents campaign offices in the Watergate building – and then tried to cover it up.

Apart from the humiliation of being the only president to resign, his critics say he never really had to face the consequences of what he did to the nation. So, when a little-known, small-time chat-show host from Britain — called David Frost (Michael Sheen) — keen to get a big break — made Nixon an offer he couldn’t refuse — for a series of interviews, a group of his fiercest critics signed up to help now SIR David to catch him out.

Bob Zelnick (Oliver Platt) and James Reston (Sam Rockwell) believed it was the closest they’d ever get to putting Nixon on trial.

Nixon the charmer is winning hands down, as an unprepared Frost – more interested in impressing his latest bit of fluff – fails to hit the target with question after question.

But determined to get value for money, Frost finally gets down to his homework and comes up with the killer blow – shaming the former president once and for all and building himself a glittering international TV career.

Under the direction of Ron Howard, what’s essentially the filming of Morgan’s West End hit is remarkably cinematic.

It has the same key cast as the stage play — Sheen and the Oscar-nominated Frank Langella — and the performances that jumped off the stage now jump off the screen.

You’re there, in the room with them, with close-ups of sweaty lips and quivering eyes. The tension as the two huge egos face-off against each other is remarkable.

Langella’s domineering screen presence is fearsome – if Nixon was anything like that for real, it’s clear why he got himself into the trouble he did.

Sheen – doing another faultless impression – portrays Sir David as a bit of a womanising light-weight, who’s initially after the celebrity glory rather than the journalistic killer punch – but the need to retain his credibility – and his TV slot back home – push him to knuckle down and become the incisive and fearsome political interrogator we’ve all come to know and love.

But how true to life is this? It’s arguably the second most accurate of the three “based on true events” releases of the week.

Was Frost REALLY like this? Is this REALLY how the interviews progressed?

Even Michael Sheen – in interviews – has suggested that there might have been a bit of artistic licence taken here.

Like with George Clooney’s recent examination of a fearless TV interview in Goodnight, and Good Luck, it could be seen as a bit of media navel gazing, but like Clooney’s film, it’s a worthy study of a key event in broadcasting history that changed our understanding of history – portrayed by one of the best ensemble casts of the year.

But this gripping powerhouse piece of film-making has been nominated in most of the main Oscar categories — and thoroughly deserves every nod it gets.