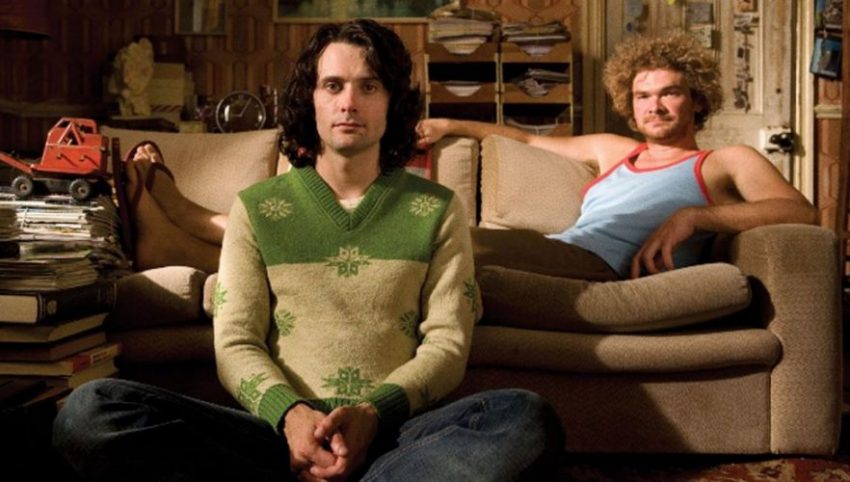 Stephen (Edward Hogg) has become a bit of a recluse since an eventful trip abroad. He lives alone in a flat, strewn with bric-a-brac and memories, with an almost infinite supply of the one and only meal he’s prepared to eat.

When he discovers that rats have eaten their way through his food cupboard, he calls the local Indian takeaway to order a curry. When it arrives, it reminds him of that fateful trip.

This film takes us with Stephen, as he re-runs the events through his mind – how he and his charming, but alcoholic gambler of a best friend Bunny (Simon Farnaby) won some money on the horses before taking a road-trip across Europe.

Billed by its creator, Paul King, as a “road trip in the head” of his central character, it’s not so much the road-trip that’s of interest – that’s a rather simplistic tale of apparently mismatched friends going on a lads’ holiday that’s not unlike many viewers will have experienced.

What makes this film stand out is the “in the head” part – Paul King has a wild imagination and presents Stephen’s imagination and memory as a combination of real-life characters against animated and drawn backgrounds.

Initially, sets like the betting shop wouldn’t look out of place in an episode of Paddington Bear – the subject, as it happens, of King’s next feature.

As the adventure continues, the backgrounds become grander and wilder.

King will be familiar to many as the director of The Mighty Boosh, whose stars Julian Barratt and Noel Fielding have cameos, but Hogg and Farnaby are perfectly capable of carrying King’s first feature.

Farnaby’s casual but charming complacency sets him aside as a comic talent to watch and British film-makers will be foolish not to make good use of him in the future.

King is keen for fans of The Mighty Boosh to try this film out, while he hopes doubters won’t stay away because they don’t get his TV show.

While his film is certainly original enough to have secured King a nomination for the prestigious Sutherland Trophy at this year’s London Film Festival, it’s perhaps rather too original to appeal to a particularly wide audience. It’s definitely an acquired taste and will be rewarding to people keen to explore the surreal mind of Paul King and his characters.

It’s particularly interesting to see how this up-and-coming director takes a minimalistic approach to the imagination in stark contrast to the far grander manifestations seen in the films of his idols, including Terry Gilliam and Jean-Pierre Jeunet.

While the film is brave and often successful in its attempt to explore alienation, mental degeneration and recovery through the hoarding and filing of actual objects, which represent the fears and memories the central character can’t come to terms with, the story, script and some of the supporting characters let down a highly visual and perhaps overly ambitious production.

Ultimately, the characters aren’t emotionally engaging enough to support this long of this visual style.

If this film isn’t necessarily one to watch, Paul King, as a director, more than a writer, certainly is.