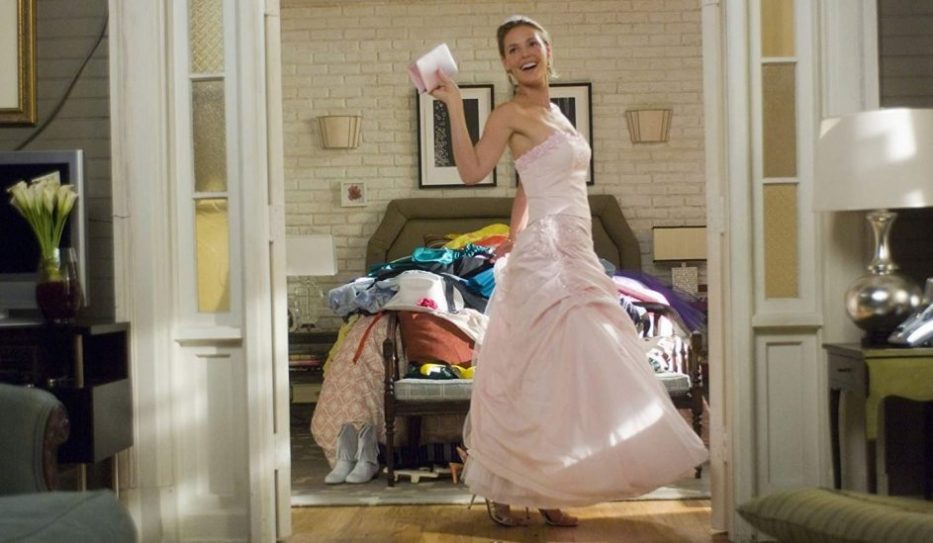 Always the bridesmaid, never the bride. Jane (Katherine Heigl) wonders why – it’s probably got a lot to do with the fact that she has an unrequited crush on her perfect boss, George (Edward Burns).

So well practised is she in the art of wedding planning, that it’s not beyond her to bridesmaid two weddings on the same night, on different sides of town. She’s developed a bit of a reputation for herself and her favourite wedding journalist (ahem) Kevin (James Marsden) decides to do an article on her for her favourite wedding supplement.

The only problem is – when he worms his way into her life, he doesn’t actually mention that he’s the wedding journalist, so when she poses for him in each of the twenty seven bridesmaid dresses she keeps in her closet, she has no idea the photos are going to end up in the paper.

Just to muddy the waters, Jane’s sister Tess (Malin Akerman) has just arrived in town and guess who she ends up getting it together with – that’s right – George turns out to be her ideal man too – although with Tess, it’s not a one-way obsession.

So Jane is jealous of her friends, exceptionally jealous of her sister, pining after her boss and trying to shake off the gorgeous, charming, perfect guy who just wants the best for her…I’m pretty sure I’ve seen something like this before…

OK, so it’s not aimed at thirty-something single guys who are every bit as bitter about being single as Jane is – but that doesn’t change the fact that this is just about as formulaic and predictable as they come.

Right down to the compulsory montage of the leading actress trying on lots of different clothes to music (see Pretty Woman) and the incoherent scene where our heroes sing along to a song on the jukebox, with all the extras cheering them on – you know the kind of thing – it feels like the film-makers have just taken all the favourite staples of the rom-com and mixed them in a pot with a bunch of hip and attractive actors and hoped for the best.

In the circumstances, if you can throw your critical faculties out of the window, you’ll find a charming and enjoyable chick-flick that will entrance all you girls who get your kicks from reading bridal magazines…for anyone else, it’ll be of almost no interest whatsoever.

As the sassy lead in Knocked Up, Katherine Heigl was a delight to watch…here, anyone who doesn’t dream of getting married to the office hunk, every waking moment, will find her a ditsy irritant who needs to have some sense knocked into her – maybe a smack on the head with the bridal bouquet might help?