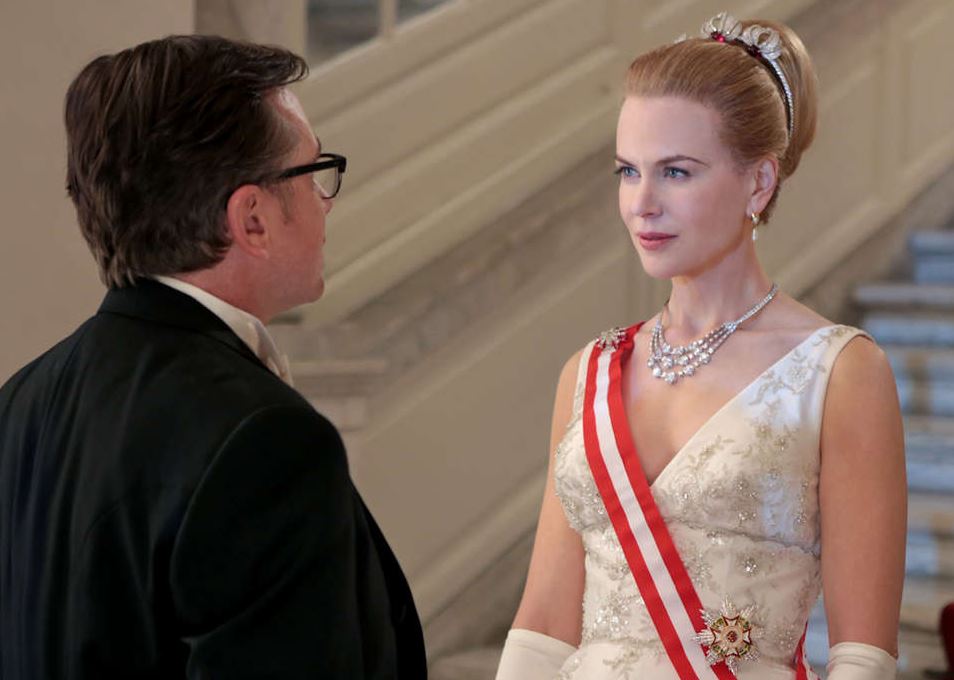 Soon after Hollywood’s leading lady Grace Kelly (Nicole Kidman) quits acting to become the princess of Monaco, her former collaborator Alfred Hitchcock (Roger Ashton-Griffiths) urges her to come out of retirement to star in his new thriller Marnie.

Her husband, Prince Rainier (Tim Roth) makes it quite clear that being an actress is not in line with her royal duties and returning to work could damage the reputation of the monarchy.

Rainier is particularly sensitive about his position at the moment, as France is bringing in economic sanctions against Monaco in response to a tax regime that’s persuading the wealthiest French businessmen to move to the principality.

And with Monaco’s independence under threat, Grace suspects that her husband’s position is also being threatened from within his own family.

When the world’s most stunning woman went from being a film star to a princess, you’d think there’d be a beautiful story to tell, but Frenchman Olivier Dahan decides, instead, to make up nonsense about an unhappily married Grace being a nosy busybody whose spying helps Prince Rainier prevent a coup d’etat and enables Monaco remain independent from France. Really?

We also get a somewhat surreal sequence, in which Sir Derek Jacobi, as the Count of somewhere or other, teaches Hollywood royalty to be a real princess, by teaching her to pull faces according to moods written on cards he holds up.

Then there’s the local priest (Frank Langella) as the voice of god and the only person Grace can truly trust, and the utterer of perhaps the only profound line of the film, that playing a princess would be the best role of her life.

Almost without exception, every last character is an archetype who could have been taken from central casting.

Nicole Kidman and the wardrobe team do their best in a film that should have been about the elegance, style and sumptuous costumes and settings that surrounded the most glamorous years of the most glamorous woman. But in the hands of Olivier Dahan and his crew, the film is an embarrassing mess of made-up moments, enmeshed in some real-life events. But if someone’s real life isn’t interesting enough to make a film about, don’t make a film about her – and if it is, tell that story, why make things up?

But narrative aside, the direction is clumsy; why do the French characters speak English in a comedy French accent, while Monaco nationals – who in reality speak the same language as their French neighbours – have English accents, making a mockery, apart from anything else, of Grace’s difficulty in learning to speak French. Then there’s the use of music that would feel more at home in a suspense film, rather than a royal biopic. And a high-speed drive along the winding streets above Monte Carlo is filmed with the 1950s-style back projection of Kelly’s final film, High Society.

Some of what Olivier Dahan tries to do is interesting – he’s clearly trying to ape the style of some of Grace Kelly’s films, but rather than draw you into Grace’s life, his efforts take you away from the story he’s trying to tell.

Too often, audiences will laugh – very much at the film, rather than with it. And the plot twists and builds inevitably towards a scene at which Grace Kelly will deliver the speech of her life to a gathering of all the film’s main characters, the corny structure will elicit groans too.

There were public rows between Dahan and his American distributor, Harvey Weinstein, who argued ferociously about the final edit of the film. It was Dahan’s version that opened Cannes and is gracing our screens, but in truth, the film is such a mess that no edit of this material could have saved it.

Thankfully for her descendants, her own cinematic legacy will live on, while, thankfully for all those involved in this shameful biopic, this film be soon forgotten.

Coming soon after Naomi Watts’ outing at the eponymous Diana, Grace of Monaco could give Australian actresses pause for thought before playing real-life princesses in future.