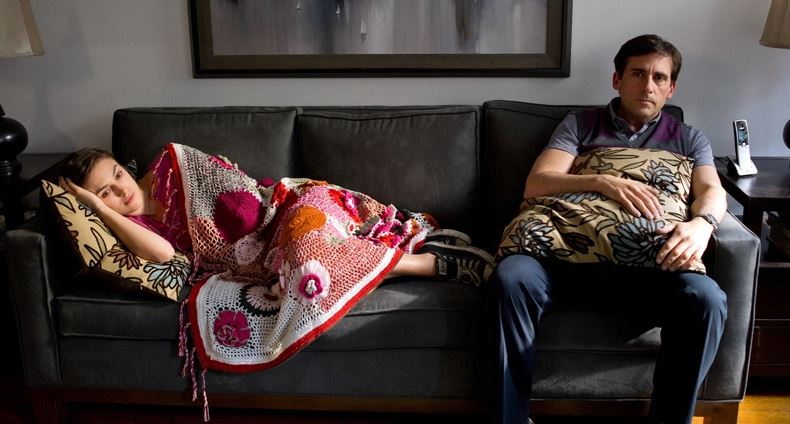 An asteroid is hurtling towards earth and the last attempt to blow it off-course has failed.

The end of the world is just a couple of weeks away and there’s nothing anyone can do about it.

You wouldn’t expect people to be particularly happy about this, but when his wife leaves him, Dodge (Steve Carell) descends even further into melancholy.

His best friends try to set him up with a nice woman to see out the end of the world with, but he’s not interested; instead, he decides to embark on a cross-country road-trip to reunite with the former love of his life before it’s too late.

But before he sets off, he encounters an unsatisfied neighbour, Penny (Keira Knightley), who has her own issues she wants to work out be

fore the end of the world, so she decides to go along for the ride.

There’s unquestionably a promising premise here – what’s set up as a romantic comedy, pairing up a dull and depressive insurance broker with a gloomy hippy chick, as the end of the world is drawing near.

But the film finds it very hard to fix on a mood – it’s not funny enough for Carell to switch into comic mode, it’s not dramatic enough to provide any sense of narrative tension and there’s certainly no romance convincing enough to believe that the two protagonists will ever pair up, even though from the first time they meet – and from the poster – it’s inevitable that they will.

It’s a pre-apocalyptic take on the far superior In Search of a Midnight Kiss, where two strangers met and got to know each other as the New Year’s Eve deadline approached. Here, the characters aren’t believable and the narrative cogs that drive the plot are out of synch – the road-trip takes several days in one direction, but the return journey is instantaneous and I stand to be corrected, but can you really fly across the Atlantic in a two-seater?

Quirkiness is no stranger to independent film, but it needs to be delightfully quirky, rather than so arch that it will irritate the hell out of most sentient viewers.

Too many elements simply don’t work. In the modern world, the authorities wouldn’t – or couldn’t – hide the true expected date of the impact. And in the world of twenty-four hours news, would the only network that anyone watches pack up and close down a day early?

Seeking a Friend for the End of the World is as much of a waste of the talents of its incongruous leads as it is of a supporting cast including Martin Sheen, Young Adult’s Patton Oswalt, Rob Corddry and William Petersen in his second big-screen come-back role of the week.

The film was clearly whimsical, but in a frustrating rather than a magical way.

It’s not so depressing that you’ll be wishing for the end of the world, but once all the ducks are in a row and you can see where it’s going, you’ll certainly be looking forward to the end of the film.