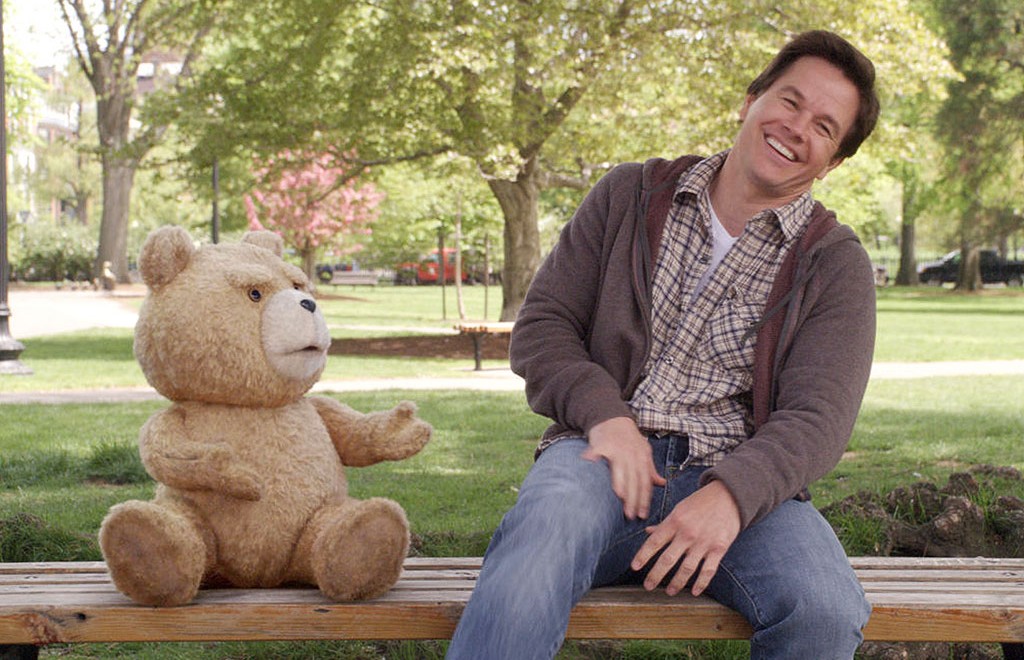 John Bennett was bullied as a young boy and had no friends to call his own.

When he received a new teddy for Christmas one year, he wished it could talk, so that he’d finally have a friend.

His Christmas wish comes true and the pair vow to be best friends forever.

Cut to 25 years later and not only do John (Mark Wahlberg) and Ted (voiced by Seth MacFarlane) still share a flat, but Ted is still the most important “person” in John’s life – which doesn’t go down at all well with his long-suffering girlfriend, Lori (Mila Kunis).

The time is coming for John to grow up and kick Ted out; it’s not only Lori who’s unimpressed with his continued dope-smoking, beer-swilling TV-sessions with Ted – his boss is grooming him to take over as the manager of the local car rental firm and his behaviour is hardly conducive to the world of middle-management.

After wowing TV audiences with his quickfire animated comedies Family Guy and American Dad, Seth MacFarlane has been given the chance to burst onto the big screen and it’s no surprise to see that animation plays a key part – sorry to spoil it for you, children, but it’s not really a talking teddy.

Similarly, he sticks to his formula of presenting the audience with something which looks – from a distance – like it would be suitable for children, but you have to listen for no more than a few seconds to find out that nothing could be further from the truth.

But his formula works – Ted had the highest-grossing opening weekend for an R-rated (equivalent to 15) comedy that wasn’t a sequel.

The trick is to give us almost exclusively loveable characters – including the emotionally weak protagonist with Peter Pan Syndrome, his whining girlfriend, and the abrasive, not-so-cuddly toy of the title.

It’s only a storyline involving Giovanni Ribisi’s pantomime bad guy that causes the film to lose pace and passion.

Allowing the characters to accept the ageing, talking teddy almost without question is a remarkably bold way to launch the story and seeing Mark Wahlberg interacting with his only childhood friend in much the same way as Martin Clunes and Neil Morrissey embarrassed themselves in Men Behaving Badly is an unexpected pleasure.

As you’d expect from Seth MacFarlane – who continues his modus operandi of voicing his title character – the gags are fast, furious and venturing dangerously close to the bone. The humour hovers between subtle and a hammer in the face, while remaining hilarious throughout.

From the moment a Jewish boy, being beaten up by his neighbours, rejects the young John Bennett’s offer of help, the tone is set for a highly entertaining film, densely packed with usually cheeky jokes.

It’s bursting with cultural references that will delight MacFarlane’s generation – from ET and Raiders of the Lost Ark to Flash Gordon, even Peter Griffin gets a look-in – but a cameo by Ryan Reynolds provides one of the most unexpected laugh-out-loud moments.

For what it’s trying to do, it can’t be faulted; on the surface, it’s clearly a ridiculous premise that doesn’t stand up to scrutiny in the real world; deeper down, it examines the difficulties some people have when it’s time to grow up; as the plot unfolds, it becomes even more surreal and at times puerile, but the characters have a mature emotional arc and it’s so funny, one critic was heard – as he left a screening – to complain that he was laughing so much, he missed half of the jokes.