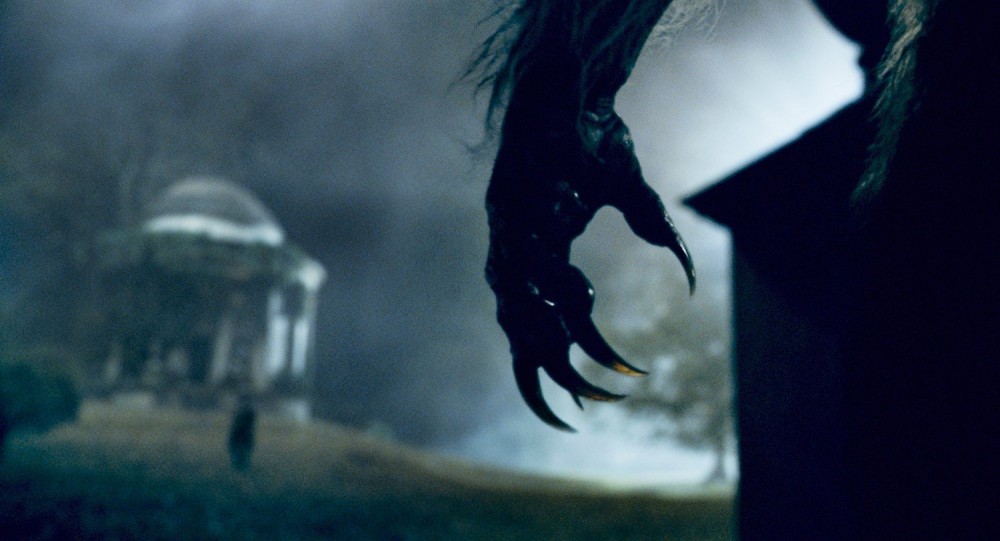 When an aristocrat’s son is ripped to shreds by a mysterious beast, on a full-moonlit night in 1891 England, his brother Lawrence (Benicio Del Toro) returns from America to be with his father, Sir John (Anthony Hopkins).

Lawrence stays around to comfort his father and his brother’s bereaved fiancée, Gwen (Emily Blunt), whose affections seem to be loose enough that they can flip from one brother to the other.

A month into the investigation, both near the ancestral home and down in London, Lawrence is dissatisfied with the progress the police are making, so he sets out to look into the brutal slaying himself. At a nearby gypsy camp, he visits a mystic (Geraldine Chaplin), who tells him about the myth of the werewolf.

As (bad) luck would have it, Lawrence himself is attacked on his way home and taken back to the gypsy camp for treatment. Against the warnings of all those around them, the mystic fights to keep him alive.

A month later, there are more mysterious deaths as victims are torn limb from limb and have large chunks of flesh ripped from their bodies.

Sir John explains to Lawrence that he’s responsible for the deaths. Unable to come to terms with this notion, Lawrence is admitted to an asylum, where they try to convince him that this lycanthropy thing is all in his head.

The doctors are so confident that they strap him into a chair by the window of a packed lecture theatre the next time the full moon rises. More fool them.

As if things aren’t complicated enough, finding out a secret about his father and falling for Gwen make Lawrence’s life all the more difficult to bear.

But where John Landis gave us what amounted to a tremendously creepy psychological thriller, building tension and dread by withholding from us the true horror of the beast until late in the film, his successor, in the form of Jurassic Park III’s Joe Johnston, makes his first big mistake only about ten minutes in, when he shows us Rick Baker’s latest handiwork full-on. Not only does unveiling the beast at such an early stage take away the air of anticipation that’s crucial in any horror film, the make-up itself is an unexpected disappointment. Rather than turning into an actual wolf, as seen in True Blood for example, or some kind of a fearsome halfway house, for some inexplicable reason, this time, Rick Baker has gone for what amounts to a cuddly man with a black furry face, slightly oversized incisors and growl that’s more rumbling stomach than Haitian earthquake.

In this kind of film, it’s usually what you don’t see that scares you – here it’s the exact opposite – what you do see doesn’t scare you. Yes, this werewolf is feral in its blood-thirst and there are some gut-churningly frightening moments, but the story itself is pedestrian at best and predictably contrived at worst.

Del Toro’s brooding misery-guts has nothing on David Naughton’s complex study of a confused, frightened and desperate American tourist, haunted by the shredded ghost of his best friend, in the 1981 classic. There’s no light in this film at all – both literally and figuratively.

Blunt looks beautiful enough as she does little more than whimper and run away from growling noises, while Hopkins just prances around chewing the scenery in a way that belittles his status as one of the great acting Knights – based on this performance, his adoption of American citizenship is no loss to us.

There was more real drama off-screen than on, with the original director dropping out, a number of reshoots and a long-delayed release.

A plot as melodramatic as it is formulaic makes this film disappointingly pointless as an updating of An American Werewolf in London – if setting it 90 years earlier counts as an updating!

But with a werewolf whose face looks like a mask you could pick off a shelf at a fancy-dress hire-shop, Rick Baker’s shockingly substandard effects – perhaps revealed prematurely so as not to have been a huge anti-climax later in the film – make it all the more upsetting that anyone has tried to make another American Werewolf in London for the CGI generation.

We might expect remakes – or revisits – to fail to live up to their classic predecessors, in reality or perception – but for the modern-day effects to fail to equal those of the original, in ambition, technical merit or presentation – is unforgivable.