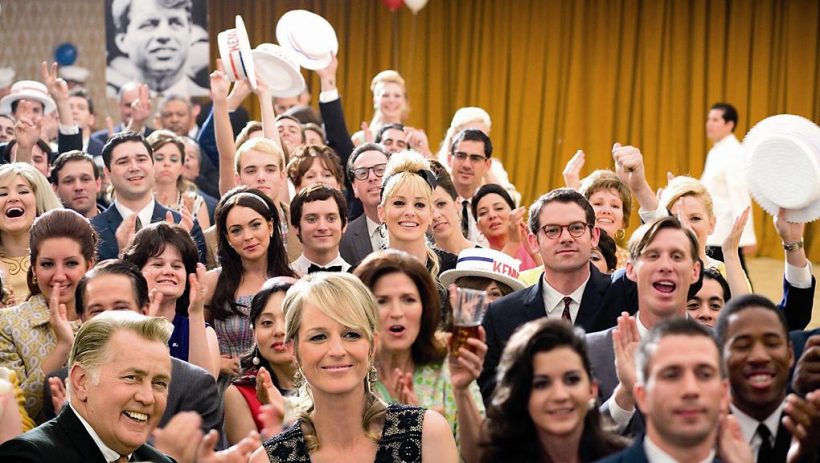 This is not, as it’s name might suggest, a study of the events leading up to the assassination of Senator (and presidential hopeful) Robert Kennedy in 1968 – but a study of what happens to pretty much everyone else at the hotel where the shooting is about to take place.

The kitchen manager Timmons (Christian Slater) knows he has a busy day ahead, so he tries to stop his staff going out to vote. This doesn’t go down well with the hotel manager Paul (William H Macy), although he’s actually rather too busy to do much about it, trying to satisfy both his wife, the hotel beautician Miriam (Sharon Stone), and his mistress, one of the receptionists, Angela (Heather Graham).

Deep in the bowels of the hotel, the head chef (Laurence Fishburne) imparts his words of wisdom to his multi-ethnic staff, including young José (Freddy Rodriguez).

Meanwhile, the Senator’s campaign organiser, Wade (Joshua Jackson) is holding Czech journalist Lenka (Svetlana Metkina) at bay, as he prepares for the big speech, while his staff, including Cooper (Shia LaBeouf), get distracted by the hotel’s resident drug dealer (Ashton Kutcher).

Then there’s the middle aged couple celebrating their anniversary (Martin Sheen and Helen Hunt), the alcoholic club singer (Demi Moore) whose despairing husband (Emilio Estevez) tries to stop her from embarrassing herself in front of the Senator.

Not to forget Diane’s (Lindsay Lohan) impending nuptials, aimed at serving no purpose other than to help a friend (Elijah Wood) dodge the draft.

All the while, old timers Nelson (Harry Belafonte) and Casey (Anthony Hopkins) sit in the lobby, pontificating about all around them.

Wow – there’s a lot going on there – and almost none of it has anything to do with Bobby at all.

It’s a clearly Altman-esque study of a large group of unrelated people whose stories come together at the ballroom of the Ambassador Hotel in Los Angeles on that fateful night.

The problem is that while the expansive, star-studded cast is universally impressive, many of the smaller storylines aren’t particularly interesting and there are many times when you’d rather actually be seeing what’s going on with the eponymous Bobby.

There’s a sense in which the film feels like an attempt to break the world record for the number of familiar faces on the same set, and the knowledge that it’ll all end with a shooting takes any tension out of it.

There doesn’t seem to be any point in investing much emotional energy in the sub-plots as none will be as significant as the assassination of a potential president.

Emilio Estevez says all these characters are emblematic – the hotel, he says, is a microcosm for everything that’s going on in the US at the moment, and reminds him of the America he’s rather be living in. But as an outsider, I didn’t really get his understanding of his country. Christian Slater explains more simply that this is a movie about people, as Kennedy was a man of the people.

In a rare turn as director, Estevez effectively evokes the period – not least by the inclusion of a number of speeches by Kennedy himself. Like last year’s Good Night and Good Luck, where Senator McCarthy played himself, the only time we ever see Senator Kennedy on screen, it’s news footage of the man himself. This certainly helps the whole project retain an air of authenticity, but in this case, it perhaps lends too much of an air of authenticity to the fictitious storylines that in many ways are simply putting off the inevitable – delaying the scene that everyone’s waiting for from the moment the opening credits roll.

It’s not a bad film – you just feel a bit short-changed by too many storylines, which don’t have enough to do with each other, and many of which don’t live up to the story the title suggests we might have seen.

It’s certainly an achievement on the part of Andy from the Breakfast Club to put a project like this together, but ultimately, it plays more like a naïve labour of love than a profound analysis of American political history.