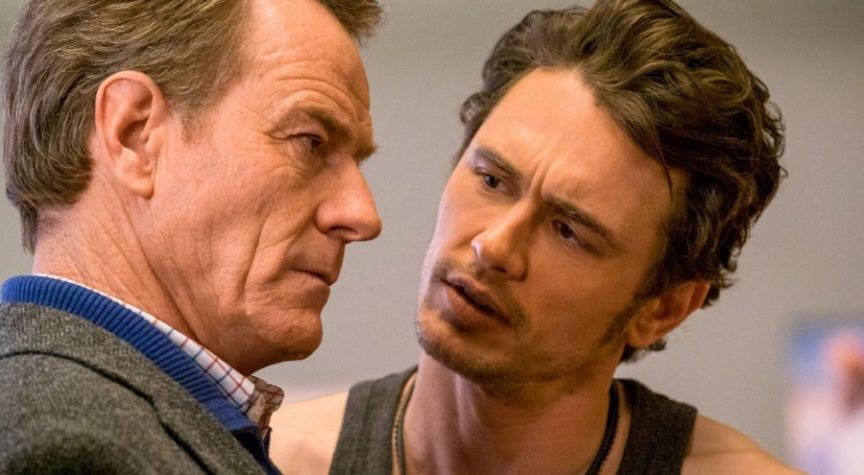 Stephanie (Zoey Deutch) is mid-way through her degree in San Jose, miles from home, where her protective father Ned (Bryan Cranston) is struggling with a lack of demand for his printing business in the internet age.

For some time, Stephanie has felt that she can’t tell her parents about her boyfriend Laird (James Franco), a billionaire Silicon Valley computer game and app developer. It’s not so much his wealth that she feels might come as a shock to them – more his free spirit and New Age approach to life.

But the relationship is getting serious and the time has come for him to meet the parents (remember that reference for later…), so she invites them to California for Christmas.

As she expected, Ned and her Mum Barb (Megan Mullally) aren’t quite sure what to make of Laird, and everything he does to try to win them over makes them doubt his suitability even more.

Whether it’s tattoos of their family, an uber-camp man-servant who’d be at home in The Birdcage or The Pink Panther, a chef who specialises in food served in syringes, a wardrobe that wouldn’t look out of place on Gandhi, an omnipresent virtual assistant that makes Siri and Alexa feel prehistoric or a smart toilet, there is much in Laird’s life that might unsettle potential in-laws.

But the idea that an entrepreneur wouldn’t approve of his daughter dating an entrepreneur, even if he’s a little unorthodox in his approach, is only the first plot point that feels a little contrived.

Oh no. Why him? Why is my daughter dating the most successful internet entrepreneur of his generation? Why is she dating someone who clearly loves her and is going out of his way to make us like him? Why couldn’t she be dating a selfish loser instead?

Unlike in Meet the Parents, where the boyfriend’s hopes to impress the Fockers were hampered by the oddball father, this time, it’s the boyfriend’s own oddball nature that’s standing in the way of him impressing “the parents” – and this twist makes the gags feel less natural; whereas in its predecessor, we identify with Ben Stiller’s efforts to reassure Robert De Niro of his suitability being hampered by De Niro’s unwillingness to accept that anyone is good enough for his daughter, in this case, if James Franco is failing to impress Bryan Cranston, it’s his own fault and he just needs to calm down a bit.

The premise of the film is familiar territory that’s been done better before – by the same team. But in many respects, this film is so lazy that even the detail has been done before and often, quite shamelessly, clumsy exposition is used to explain to the audience where the gags are been stolen from, as if that turns plagiarism into homage; it doesn’t.

As the man-servant Gustav (Keegan-Michael Key) jumps out of the shadows to attack Laird, in an effort to test his readiness for an attack and his ability to defend himself, just as the audience is about to shout “You got that from The Pink Panther!” at the screen, Bryan Cranston does it himself. For added supposed comic effect, the young pretenders look back inquisitively and shrug. How hilarious. It’s the younger generation who are out of touch with popular culture.

Or are they? For much of the film, the younger characters are making references to modern culture which go way over the heads of Cranston and Mullally, suggesting that older people have different cultural references from younger ones – not surprising, not a particular source of humour and certainly not a reason to conclude that someone is wrong for your daughter.

Other plot details just flip wildly from unlikely or incoherent to so unbelievable that you’ll just want to get out your smartphone and watch clips from Meet the Parents instead.

With most of the structured jokes feeling forced, many of the real laughs – and there are a fair few – come from the more puerile, lazy, obvious and gross-out gags. There are efforts to find fun in futurism, many of which work – even if they’re pushed a little too far. A cameo from Elon Musk (yes – “the Tesla guy”) rams home that point even further – although it’s just another example of different generations having different cultural references.

The other cameos, I daren’t mention lest I spoil the most clumsy gag of all, but when a pair of familiar (depending on your generation) faces stomp down the street in the final scene, the most surprising thing will be how tall they are and the only humour will come from the sheer – if  knowing – absurdity of the juxtaposition.

And as with Elon Musk, putting famous faces in unexpected places is a cheap way to try to squeeze smiles out of already unimpressed audiences.

What’s particularly disappointing is that of all the scripts that must have been piling up on his desk, Bryan Cranston – who, in recent years, has become one of the finest and most respected dramatic actors, both on TV and on film – chose this one to return to comedy, where he first made his name as a younger dad in Malcolm in the Middle. Even he’s played out-of-touch father better before. But what do you expect, when this script gives him little to do but look as bemused as us. His fans may well be asking Why Him?

This might have worked better if outsiders had approached the subject with a fresh eye or if the Fockers team had had the nerve to be a little less obvious. It can be funny to see the person sitting next to you being hit in the face with a foam frying-pan, but this feels like being hit in the face yourself with a metal one.