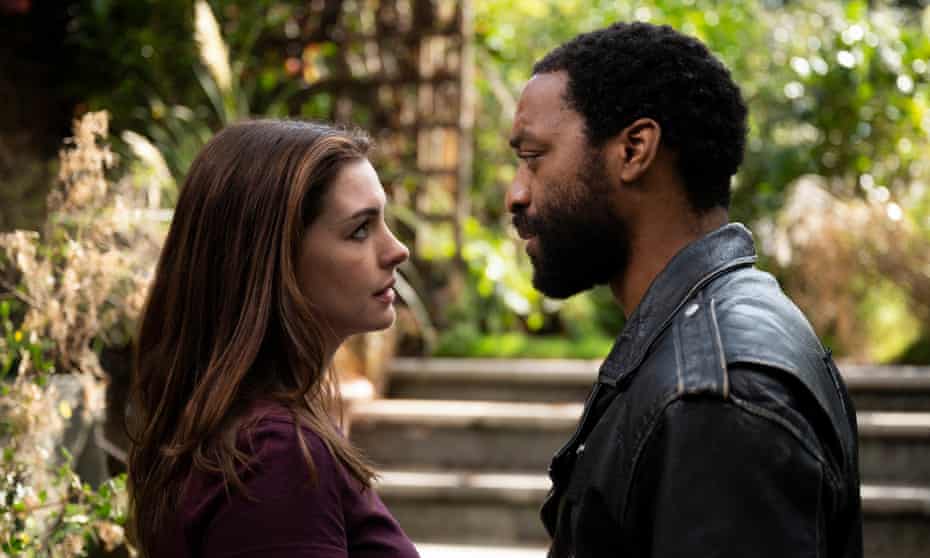 The UK’s first lockdown, as the country – and the world – try to deal with the arrival of the Covid-19 pandemic, leaves delivery driver Paxton (Chiwetel Ejiofor) and marketing executive Linda (Anne Hathaway) trapped in the same house, as their relationship is falling apart.

He just wants to sell his motorbike to raise enough money to travel to find himself, once the lockdown has been lifted. She’s just looking to further her career, without being held back by someone she regard to be beneath her.

Although Paxton’s on furlough, his boss Malcolm (Sir Ben Kingsley) needs him to take on three delivery jobs for cash – under a fake name – as major department stores move their most valuable stock into secure storage, for protection while they’re closed.

Linda is similarly helping her clients wind down for the lockdown, with a major firm needing to move a £3m diamond to the safety of its HQ.

When the pair realise that Paxton’s last job includes moving a valuable diamond from Harrods to the safety of its HQ, the pair realise that they might just be able to get away with using the chaos of the crisis to keep the gem for themselves – with the inevitable consequences that would have for their break-up.

Many film-makers have been inspired by the lockdown – either creatively or logistically. Unable to work on large productions, where social distancing is difficult, many have opted for smaller projects that can be done simply, without compromising the narrative.

Director Doug Liman and writer Steven Knight have tried to do just this and ended up with the fake gem that accompanies valuable diamonds as they travel the world. With a star cast and stylish production design, it looks gorgeous but there’s almost no substance to it.

A film about lockdown forcing a separating couple to stick together should provide scope for some meaningful introspection but little light is shone on relationships by the discussions of this pair.

And the idea of a jewellery heist that just can’t fail, not least as every has their faces covered, also has potential as the reality of the situation dawn on these bickering beginners – but somehow, they fail to ratchet up the tension.

The pacing of the film feels uneven too, with the crux of the plot not emerging until well into the second hour, the first being full of obvious observations about the lockdown – such as gags about zoom calls – which will raise the odd smile of acknowledgement now but will lose resonance as real-life resumes. But oddly, given how reliant it is on the implications of the lock-down, there’s almost no reference to the virus itself, apart from news bulletins coming out of TVs and radios.

Too much of the plot feels contrived – separating couples were allowed to move out, the delivery sector is perhaps the last that would have needed to use the furlough scheme – and what are the chances that in the whole of London, Paxton’s “off the books” job for a small firm turns out to be working for Harrods – under the stewardship of his estranged girlfriend?

We don’t really learn much about the individuals – except expositional revelations required to follow the plot – making it hard to care for them, alone or as a couple, but they do their best with a thin script, as the team clearly call in favours with a handful of big names literally phoning in performances – Ben Stiller appears in a couple of zoom calls as Linda’s boss, Sir Ben Kingsley is Paxton’s boss, while Mindy Kaling, Stephen Merchant and Mark Gatiss also turn up on screens – the latter two also making the briefest of in-person appearances.

Locked Down feels like a project concocted to entertain the film-makers while they couldn’t do anything more productive – and to entertain audiences will little else to watch.

At any other time, this would be an arch – and almost offensive – attempt to blend as many ideas as possible – from relationship drama to comedy heist – with a lot more miss than hit. But while we’re still living through the lockdown, it’ll pass the time easily enough, with the occasional flicker of recognition for what many of us are still going through.

It’s very much a film of the moment – and a very specific moment – by the middle of next month, when people can mix outside and non-essential retail has re-opened, there will be far more satisfying ways of spending two hours than scoffing at the unlikely twists and turns of this cinematic experiment.

As soon as the lock down is lifted, there’ll be no reason to be Locked Down with them.