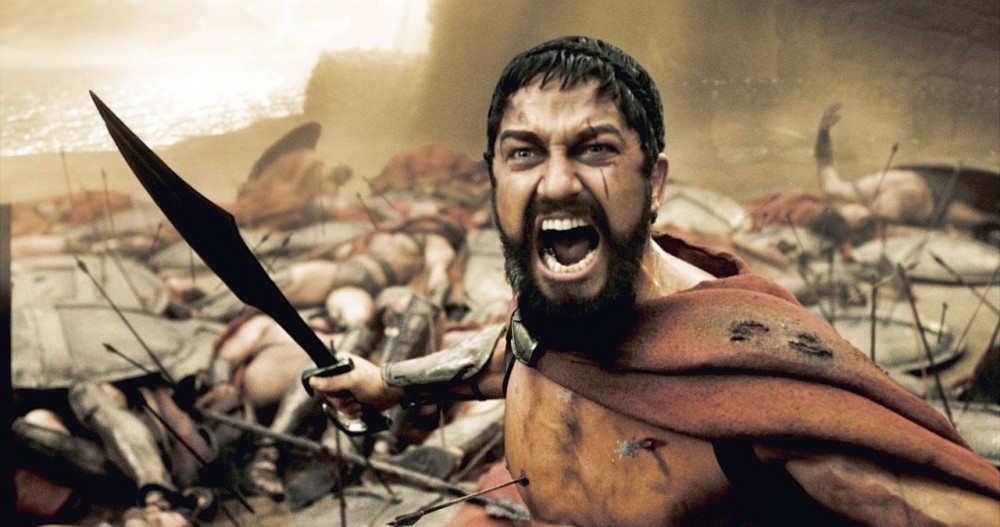 How many Spartans does it take to hold a quarter of a million Persians at bay?

300 apparently, or at least, that’s as many as King Leonidas (Gerard Butler) can get away with taking with him, without permission from the pacifist politicians, who would apparently rather be conquered by their neighbours than fight for their independence.

Justifying his mission by saying he’s taking some of his best soldiers “for a walk,” Leonidas and his brave 300 manage to see off thousands of Persian invaders at Thermopylae while, back home, his Queen (Lena Headey) tries to persuade the politicians to send out the army to back him up.

This is a big film, with big men fighting big battles with big weapons.

There’s almost no story to it at all – it has the simplistic chronology of a computer game, with a team of goodies moving methodically from one set of opponents to the next – each time, moving up a level, if you will.

Thematically – like many films depicting ancient history right up to modern-day gangster flicks – this is about honour, pride, loyalty and how power corrupts.

Visually, it’s interesting, shot as it was against a green screen, with all the vast battle scenes recreated digitally. It’s undoubtedly an impressive spectacle and to a point, it’s a thrilling tale of David (Leonidas and his brave 300) versus Goliath (Xerxes and his entire nation) – but that point comes a long way from the end of its nearly two-hour running time.

One battle-scene eventually starts to merge into the next – there’s only so much computer generated blood, decapitated heads, stampeding beasts and sword-wielding giants you can take.

But the talking scenes back in Sparta failed to match the fighting for excitement.

By the end of it, you kind of wish they’d just stop debating and keep on swinging those swords and chucking those spears until one of the sides has no-one left and we can all go home.

I won’t give away the ending, but you’ll almost certainly feel that by the time we get there, the film-makers needn’t have dragged out the blood-fest for so long.