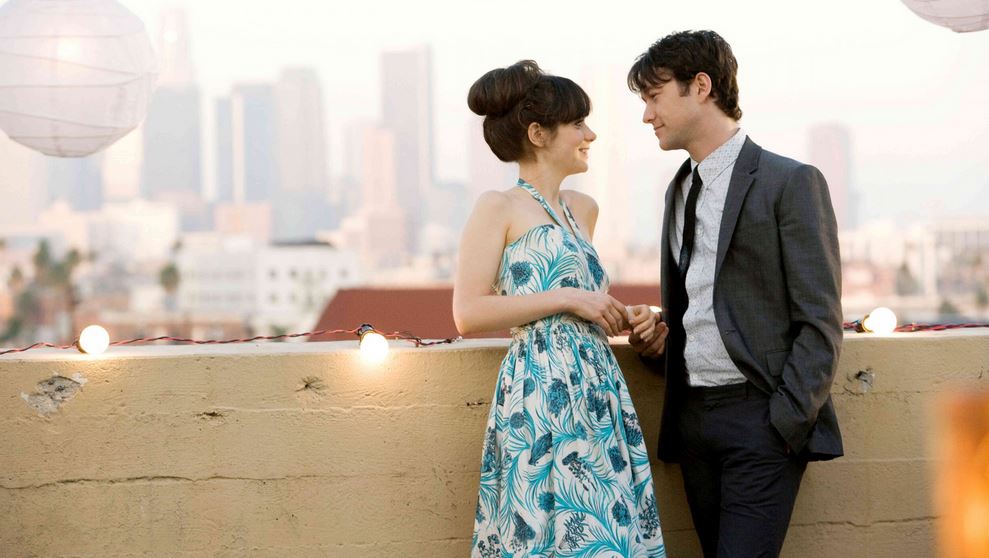 Tom (Joseph Gordon-Levitt) wants to be an architect. Consequently, he’s rather dissatisfied with his job, writing messages for greetings cards, at a Downtown LA publishing house.

The office suddenly comes to life with the arrival of a new secretary, Summer (Zooey Deschanel).

A shared interest in the Smiths pushes these two beautiful young things into a sweet summer romance, but he can feel himself falling deeply for her, while she’s just having a bit of fun.

With the two of them pulling in different directions, the relationship eventually cracks. She moves on – and out – while he struggles to get his life back on track.

Morose isn’t the half of it. He can’t see the point of living without the woman who brought sunshine into his life.

His quirky friends, precocious sister and a blind date can’t even come close to bringing him back to reality – and it’s only a chance meeting with Summer that reignites any sign of life inside him.

But you’ve only got to read the tag-line of the film to see that his hope is futile.

It’s rare that a romantic comedy comes along that feels fresh.

While there aren’t that many original ideas in this film, it mixes the ingredients up in such a way that it tastes unlike anything we’ve been served for years.

Firstly, it’s a romantic comedy that’s aimed at men – how often does a film centre on a lovestruck young man, struggling to come to terms with the fact that the woman who’s reached in and grabbed his heart wants nothing more than a quick fling. How often do we get to see the sensitive guy, ripped apart by the cold-hearted ice-queen?

Secondly, it uses the kind of fractured time-line more often seen in thrillers, plucking – almost at random – days from the relationship and presenting them out of order, so one minute we’ll see a scruffy Tom, moping around, and the next, we see the couple skipping around Ikea together, rolling around on an Aspelund. Often, playing around with the chronology serves to spice up an insufficiently consequential story, but here, it neatly unsettles us and highlights the unpredictability of young love – exciting one minute and heart-wrenching the next.

Thirdly, the film is unusually honest for the genre. Love is painful. Love doesn’t always have a happy ending. Sometimes, the object of your desire can genuinely be devastatingly cruel – without even realising it. And the film retains its bitter-sweet nature to the bitter-sweet end, refusing to head where most rom-com makers would take it.

Zooey Deschanel is suitably bright and bubbly, cool to Tom but reasonable to third parties – while Joseph Gordon-Levitt is rather sombre – even at the best of times – but this doesn’t make him any less empathetic to those of us (am I revealing too much here) who’ve met similarly naively selfish women – and even that is maybe giving this breed of creature the benefit of the doubt – to outsiders, I’m sure they’re evidently calculating in the way they milk what they can from a guy, while to their victim, love is not so much blind, as forgiving.

As well as fracturing the timeline – to good effect – the director Marc Webb employs some other effective tools, such as a tongue-in-cheek song-and-dance number, some animated flourishes and a clever use of split screen, which echoes Sliding Doors and Run Lola Run with its alternate possibilities.

While being a thoroughly original take on a well-worn genre, there’s definitely a sense in which it will appeal far more to young single men, pining after the wrong woman, than it will to other sections of society – but there’s plenty to enjoy for everyone else too – since most of you know someone like me – sorry – that should read “most of US know someone like HIM.”