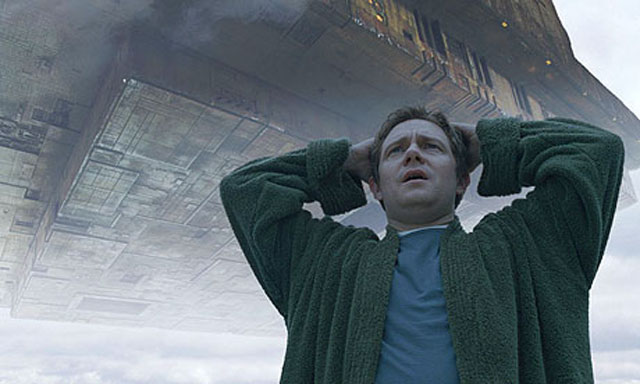 Ordinary bloke Arthur Dent (Martin Freeman) is having a bad day as he discovers his house is about to be bulldozed.

As he tries to stop his home being demolished his best friend Ford Prefect (Mos Def) appears and tells him (a) he is in fact an alien and not from Guildford and (b) the Earth is about to be destroyed to make way for a hyperspace bypass.

He then saves Arthur’s life by smuggling him on board a passing spacecraft, which is where Arthur’s wonderful and weird adventures begin along with his introduction to the electronic hitchhiker’s guide.

Don’t Panic! Twenty years in the making and it was worth the wait.

This movie’s a visual feast paying homage to the spirit of Douglas Adams much loved novels.

The renowned writer managed to pen a second draft of the script before he died suddenly of a heart attack. Featuring escaping dolphins, pesky mice, Vogons, the Deep Thought Computer and the infamous guide book avid fans won’t be disappointed.

Stephen Fry was inspired casting as the guide book; Martin Freeman is terrific as Arthur Dent (who spends the whole time in his pyjamas and bathrobe) while Alan Rickman is magnificent as the voice of Marvin, the chronically depressed robot.

The American contingent, led by Sam Rockwell as the two headed Zaphod Beeblebrox, is equally impressive.

This film is a fantastic ride and a fitting tribute to Douglas Adams.

If you are wondering if it includes ‘what is the meaning of life, the universe and everything?’ It does and the answer – well, you’ll just have to watch it.