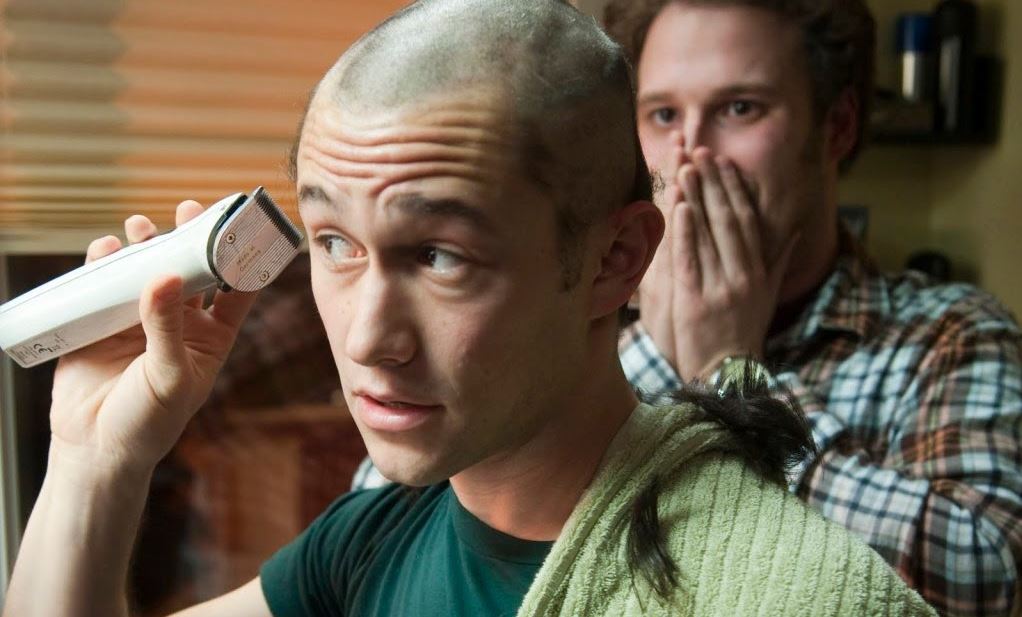 Radio journalist Adam (Joseph Gordon-Levitt) eats well, exercises regularly and doesn’t smoke – all of which only add to his confusion when he’s diagnosed with a rare form of cancer.

His own internet research convinces him that he has a 50% chance of survival. “That’s not that bad,” exclaims his best friend Kyle (Seth Rogen) positively, noting that if celebrities, such as “Dexter and Patrick Swayze,” can beat cancer, so can he.

When Adam’s mother Diane (Anjelica Huston) threatens – or in her view, simply offers – to move in to look after him, his girlfriend Rachael (Bryce Dallas Howard) pledges to stick by his side.

Adam’s consultant is a misanthropic technician, unable to relate to other human beings, so he assigns him to a trainee doctor, Katherine (Anna Kendrick), to counsel him through his treatment.

A good soul at heart, Adam’s cantankerous side is woken by Anna’s enforced kindness and understanding as she tries to get him to come to terms with the situation.

As his treatment progresses, Adam is forced to confront not just his present situation, but his relationships with all of those around him; whether he survives or not isn’t clear, but what is clear is that if he does, his life will be very different.

The “cancer comedy” is not an oft-visited movie sub-genre for obvious reasons; it requires a bold set of film-makers to take a disease with a 50% survival rate and have the audacity to seek laughs.

But the laughs are are not so much at the expense of the disease, as they are at the way other people react to it, much like how The Station Agent mocked the way people responded to Peter Dinklage’s dwarf, rather than the dwarf himself.

With many of the film’s emotional highs and lows coming directly from the experiences of the writer and producer Will Reiser and his real-life best friend Seth Rogen (that’s fortuitous!), it feels genuine and believable at almost every turn.

The film uses disease as a catalyst for the examination of all areas of life and the reassessment of all your the relationships – but exploring such issues with Adam will make you consider your own life, without you having to go through such heart-ache and literal pain. Having said that, it’s Rogen, rather than Gordon-Levitt himself who represents the viewer on this journey.

It’s very hard to find much wrong with this film – the script explodes with hilarious, but completely appropriate one-liners, delivered with inch-perfect precision by an outstanding cast; Seth Rogen feels like he’s uttering his lines for the first time, as he clearly draws on his own experiences; Anna Kendrick’s delightful as her doctor unprofessionally develops feelings for a difficult patient; Anjelica Houston’s heart-breaking as a mother, so desperate to play a bigger part in her son’s life that she almost sees his cancer as a positive; but Joseph Gordon-Levitt – in every scene except while the others are waiting for him to have his surgery – carries the film with a tremendously mature, sympathetic and complex performance, as his happy-go-lucky demeanour is challenged by the shock of his sudden, life-threatening inconvenience. After the recent 500 Days of Summer, he’s carving himself a niche as the lead in independent gems.

With such good actors performing a script of this calibre, the chances of the director messing it up were minimal, but Jonathan Levine’s handling of the story is effective – particularly moments such as when Adam receives his diagnoses and passes it on to those around him. He delivers a warm-hearted, witty, insightful and intelligent movie that’s as profound as it is funny.

Bryce Dallas Howard’s girlfriend is a less believable element of the film, flipping unconvincingly between reliability and irresponsibility, and having Adam’s father suffer from Alzheimer’s Disease seems to add an unnecessarily mawkish level to the proceedings.

The team take on the challenge of a feel-good cancer-comedy – they had a 50/50 chance of success, but the prognosis is excellent.