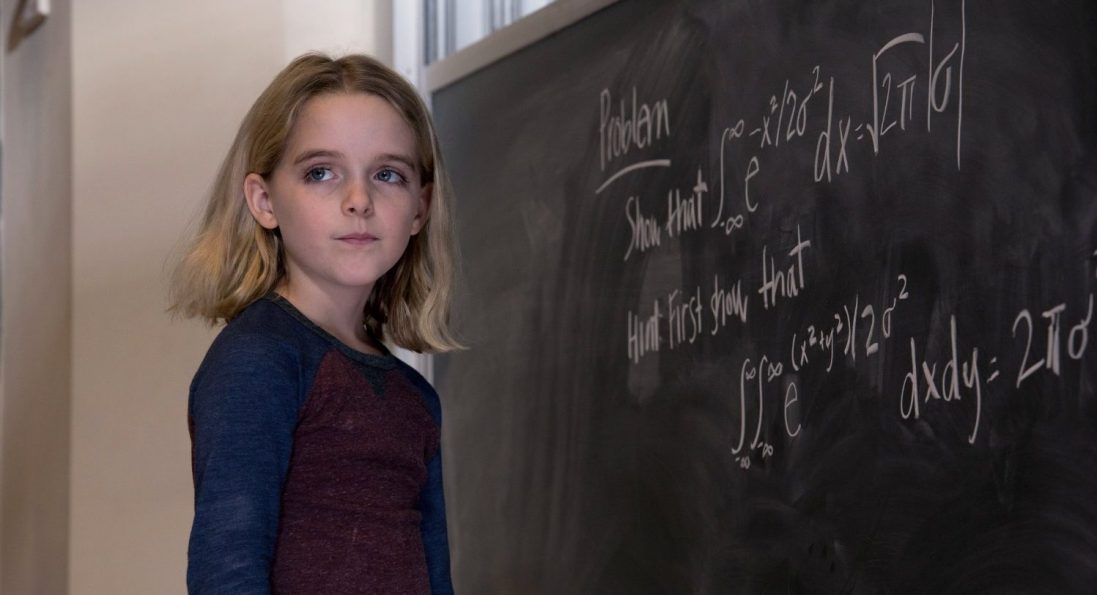 He’s been home-schooling her, but he’s taught her all he can and feels she’d ready for a real education – and needs to learn to socialise with children her own age.

When Mary’s teacher Bonnie (Jenny Slate) realises how advanced she is, the school principal (Elizabeth Marvel) offers to secure her a scholarship to a local school for gifted children, but Frank is adamant that he wants her to have a normal childhood.

Out of the blue, Frank’s estranged mother – Mary’s grandmother – Evelyn (Lindsay Duncan) turns up and asks to take Mary to live with her in the big city, where her talent can be nurtured.

This film is a tough sell – the trailer is unlikely to persuade you that it’s worth your time – but have faith and your prejudice will be confounded.

Ostensibly, it’s a custody battle between an uncle, who wants his gifted niece to have a normal childhood, and her grandmother, who thinks society would benefit from the genius that could result from her talents being nurtured from a young age. It’s a legal drama with a divisive family drama at its core.

But you don’t feel like you’re being bamboozled by legalese and the family rivalries never feel mawkish or forced.

The screenplay is as smart as the characters it portrays, being true to protagonists who are clearly above average intellect, without leaving regular cinema-goers feeling patronised or left behind. And the twists and turns of the story are totally believable at every turn.

While the story is being told from Mary’s perspective, Frank is truly at its heart, yet significantly, Evelyn isn’t painted as a villain. Yes, she wants her granddaughter to blossom for very personal reasons, but her viewpoint is always presented honestly and altruistically. It’s also pleasingly unusual that the two rivals in this bitter legal battle are able to chat politely outside the confines of the courtroom, despite years of animus between them.

It’s simply a joy to be met by a cast of almost entirely likeable characters – all of whom have Mary’s interests at heart, although from a different perspective. When even the supposed villain is honourable, in her own way, it makes the drama so much more interesting – so much more mature. You can imagine that other film-makers might have replaced this cordiality with Hollywood scowls.

There were two moments in which Gifted drew tears from eyes that I can’t recall having leaked in the cinema since Haley Joel Osment told Toni Collette that she made her mum proud every day. But while its sentimental, it’s not overly so and never gratuitous, with each such scene feeling apposite and necessary to the development of the plot and characters.

The performances are universally so heart-warming and genuine that you forget that you’re watching Captain America and child star McKenna Grace skilfully combines cute, precocious and bratty, without ever losing your love.

After going from the intimacy of 500 Days of Summer to the blockbuster comic-book adaptation of The Amazing Spider-Man, it’s rewarding to see that director Marc Webb is still able to do something special with a smaller film – ably assisted by writer Tom Flynn.

It’s almost hard to work out why, with Webb, Flynn, Evans and Grace clearly being so gifted themselves, the release of the most emotionally enriching and intellectually satisfying film of the year so far wasn’t held back a few months to improve its chances come Awards Season.

To borrow a phrase from the film, I could watch it “ad nauseam.”