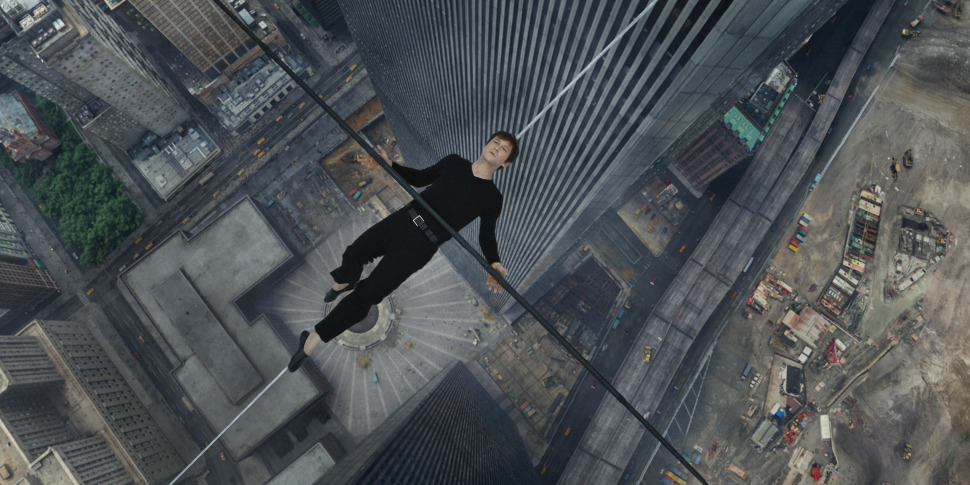 On a trip to the dentist in Paris in 1973, a young French showman with – it has to be said – delusions of grandeur, opens a magazine in the waiting room to see a picture of Manhattan’s Twin Towers, as they’re nearing completion.

Philippe Petit (Joseph Gordon-Levitt) makes a living as a busker – juggling, riding his unicycle and doing a high-wire act – will, more of a low-wire, slung between lamp-posts or trees. But seeing the photo of the World Trade Center, inspires him to greater things. Drawing a pencil line between the towers is all that he needs to convince himself that he could – he should – walk the void between them.

Over the months that follow, he recruits a group of people he calls his accomplices, acknowledging the illegality of what he describes as his “artistic coup.” But time isn’t on his side – once the buildings are completed and occupied, it will be impossible to achieve.

Anyone in their fifties or older will most likely remember Philippe Petit’s “walk” from when it happened. Anyone younger might well have seen the story described in James Marsh’s documentary Man on Wire, back in 2008. I say documentary, but although it won the Oscar in this category, it was one of the early examples of films that combined talking heads with archive footage and reconstructions.

Given that the director Robert Zemeckis has decided to feature a future Philippe Petit describing his adventure directly into the camera, while was see a reconstruction of the events, there’s a sense in which not only is the story the same, but The Walk’s format is similar to that of its predecessor too. Although we’re not hearing from the man himself directly this time, we’re hearing his words – through an actor – as this film is based on his own book. So it’s the same story, in the same man’s words, in a similar format.

And that documentary was so compelling, so thrilling, so shocking, so inspiring, that it raises the question of why the story needs to be retold – so soon.

But if anyone was going to do it, Robert Zemeckis seems to have been a good choice, because if you can forget that you already know what happens, The Walk is similarly compelling, thrilling, shocking and inspiring – not so inspiring that you’d want to have a go yourself though, but inspiring in the sense that it will make you want to follow your own dreams.

The film is laced with humour – which comes from the representation of a man who was, to say the very least, a character. And as we watch him building his team, practicing for his stunt and sneaking his equipment up to the 110-storey high platforms, The Walk plays very much like an Italian Job-style heist film.

I’m not usually a fan of having native-English speakers delivering dialogue in a foreign accent, but Joseph Gordon-Levitt manages to pull off the French accent convincingly enough, especially playing against a supporting cast including French actors – often speaking in French. Having said that – not wanting to take anything away from a vibrant, flamboyant and thoroughly entertaining performance – given the familiarity of the story and the success of the documentary, Zemeckis didn’t really need the star-power of a Hollywood actor to bring audiences to this film, especially because of the two things he did have at his disposal that James Marsh and his team didn’t.

Firstly, while Man on Wire was blessed with first-hand accounts, archive footage of several practice walks, reconstructions of the heist-like preparations and astonishing still photographs of Petit’s “artistic crime of the century,” in all the excitement and complexity of the event, there was no video footage of the walk itself. This is not a problem for a modern-day film studio.

Secondly, rather than simply using standard green-screen technology to recreate the sadly destroyed landmarks, Zemeckies goes a step further and uses 3D – and here’s the most welcome post-script – effectively.

The vertiginous setting, of course, lends itself to that third dimension, but throughout the film – from the training walks to simple actions, such as lifting up a short length of string to see how it might look to rig a wire between two locations – Zemeckis makes better use of the gimmick than almost any other recent director – not least Ridley Scott, who might as well have saved himself some money and shot The Martian in 2D.

Petit’s enthusiasm, determination and pig-headedness make him a fascinating and inspirational character, the cinematography – and the events it allows the big screen to portray – will take your breath away, and the recreation of the Twin Towers will bring back happy memories of a more innocent world before terrorism.

A PG certificate also makes this a perfect family film, as long as you warn the kids, “don’t try this at home.”

Had Man on Wire not been made, The Walk might have been even more successful a telling of the story, but having seen the full first-hand account and the genuine emotions – both contemporaneous and recollected – and knowing what’s been missed out, both bitter and sweet, a little of the authenticity and magic are  lost.