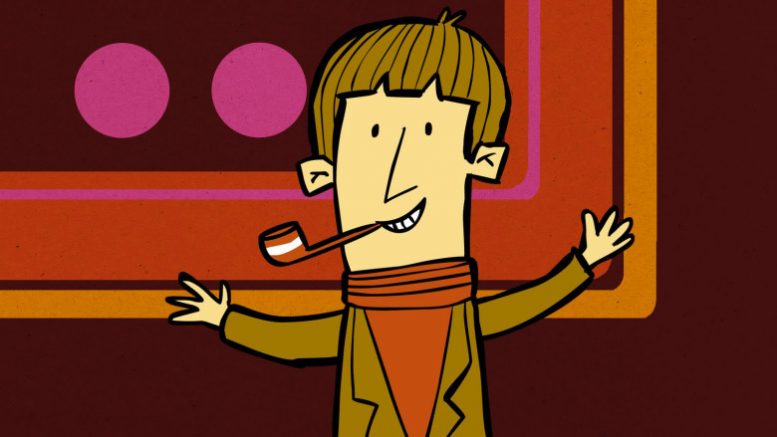 This film’s subtitle is “The Untrue Story of Monty Python’s Graham Chapman,” which says it all, really.

This is a telling of the life story of the tragic comic, whose huge success – largely with Monty Python – was tainted by alcohol addiction and prejudice about his homosexuality.

More precisely, it’s Graham Chapman’s own telling of his life story – or at least a life story that he imagines – some of which is true, but much of which is fantasy.

There are two particularly striking things about film, written by the the late Monty Python member Graham Chapman, before his death (obviously). Firstly, he had the forethought to record his lines before falling from his perch and pushing up the daises. The second is the fact that the three directors (including Bill Jones, the son of Python Terry) chose to use different styles of animation for each section of his narrative.

But what’s more interesting to consider is how much Chapman’s film actually teaches us about him and a clue is in the title: a “liar’s” autobiography. Much of it is clearly true – Graham Chapman was indeed in Monty Python, was indeed openly gay, did indeed have a drinking problem and did indeed have a troubled relationship with his parents – it’s probably not true that his parents owned a chateau next to a pub in France, though.

This being the case, it’s difficult to know how much the film actually tells us about the late Python and how much it is just a flight of fancy. If it’s meant to be putting his heart on the screen, he shouldn’t have tarred it with fantasy, but if it’s largely his imagination, why muddy it with truths from his life – and why not make it more fantastic? His fellow Python Terry Gilliam has a much better grasp of this genre. In a sense, this is now more than a string of cartoons that don’t particularly say very much about anything or anyone.

Far from being the comedy you might expect from one of the Pythons, it’s actually a tremendously sad film – about how difficult Chapman’s life was – it’s almost a relief to learn – and this bit, of course, was not written by Chapman himself – that he died very young, putting himself out of this misery.

The film certainly gives an interesting insight into the prejudices of his lifetime – or at least of his life – in that he was happy and proud to admit to his homosexuality but kept his alcoholism very close to his chest until he’d managed to shake it off.

In true Monty Python style, I feel I should start over by saying that there are not two, but three particularly striking things about this film. The fact that he recorded his own lines before he died, the fact that it’s done in several styles of animation – and the complete absence from its credits list of Eric Idle, the Python member who’s done the opposite of Terry Gilliam and made the US his home.

Asked why he wasn’t involved, he would say only that he didn’t want to be associated with a film that would be sold as a Monty Python film when it was actually a Graham Chapman film. Then, in a more unguarded moment, he added “I didn’t think it would be crap. But I’m not upset that it turned out to be crap.” His judgement of the film is perhaps unfair. It’s not great, but it’s not crap. Crap might more fairly be used to describe Idle’s relationship with his fellow Pythons, the rest of whom participated with good grace.