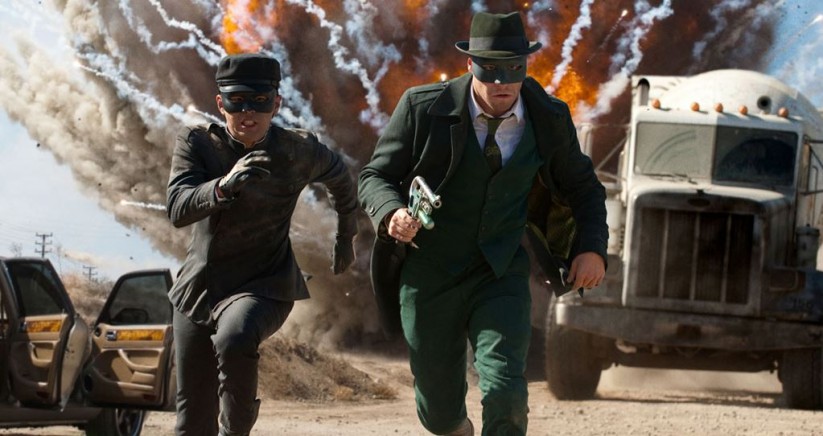 There’s been almost no serious crime in the city for years. Everyone is calm and loves District Attorney Scanlon (David Harbour) for keeping them safe.

When newspaper magnate James Reid (Tom Wilkinson) dies in mysterious circumstances, his spoilt, slacker, richboy son Britt (Seth Rogen) takes over, with no knowledge or experience of the newspaper industry – or anything, really.

The first thing he does is sack all the staff in his mansion. Big mistake, as he can’t even make himself a decent coffee. Without his morning caffeine injection, he can’t do anything, so he ends up hiring back the coffee-boy – an unassuming geeky techno-enthusiast, Kato (Jay Chou), who – it turns out – can make oh so much more than just a good cup of coffee; armour-plated cars with ejector seats and bonnet-mounted machine guns, for example.

Next on his to-do list is to hire a secretary who can help him keep the newspaper afloat – enter the stunning blonde Lenore (Cameron Diaz).

Meanwhile – comic book style – over the other side of town, the city’s criminal overlord Chudnofsky (Christoph Waltz) is asserting his authority on his underworld by crushing dissent from a new club owner (James Franco), all of which seems to contradict the idea of a city with no crime, as propagated by the newspapers and DA.

Before long, Britt gets a whiff of the crime lingering beneath the surface of his city, and with the help of Kato, his toys, and a couple of facemasks, he embarks on a mission to clean up the crime, uncover corruption and restore true calm to the city.

Hang on. Billionaire dies, leaving richboy son to wander the city streets at night with his sidekick, a pair of facemasks and all the gadgets he can buy with his fortune to clean up the streets. Batman, right?

This is Batman-light. Unlike the more familiar masked vigilante, the characters had no depth and little coherence – and it didn’t feel at all consistent.

Much of the time it feels like it’s trying to be a standard superhero film, with the dastardly nemesis being ruthlessly evil, but while Seth Rogen is on screen, it’s simply a buddy comedy. But it doesn’t really put its heart into either – the action scenes aren’t exciting enough and the comedy isn’t funny enough.

There are witty asides and the odd impressive stunt or chase, but nothing that will blow you away on either count.

It also feels odd that Britt has no fighting – or other – skills to speak of and relies on Kato’s martial arts expertise, which frequently see him overcoming entire gangs armed with automatic weapons. But when the plot requires it, Britt can hold his own against Kato without sustaining even a bruise.

The only questions that remain are why on earth is Christoph Waltz following up his Oscar with this, what on earth is Cameron Diaz doing in this and with films such as Eternal Sunshine and the Science of Sleep under his belt, why does Michel Gondry need to be playing around with such clichéd mediocrity?