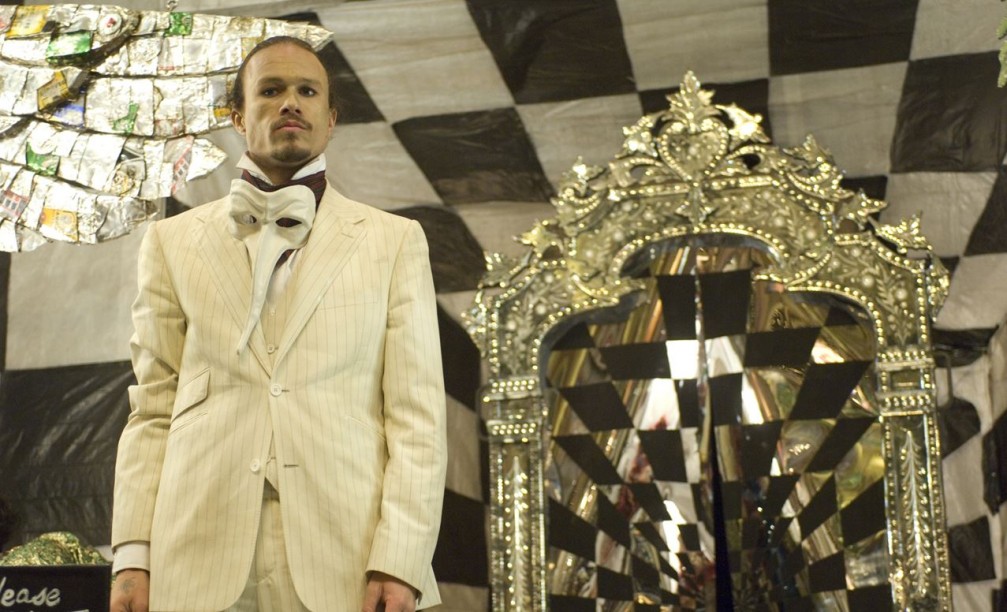 Dr Parnassus (Christopher Plummer) is centuries old, locked in a bet with the Devil (Tom Waits).

They’re each trying to lure the souls of the living into their coffers – Dr Parnassus does this by persuading them to step through a magic mirror, built into a peculiar stage-set in the side of the horse-drawn lorry he uses to travel around the grotty Dickensian back-streets of modern-day London.

At stake is the soul of Dr Parnassus’s strikingly beautiful daughter, Valentina, (Lily Cole), who is part of his mysterious travelling show – along with dwarf Percy (Verne Troyer) and Anton (Andrew Garfield), a young man who’d do anything for her.

Travelling between shows, they stumble across Tony (Heath Ledger), hanging from a bridge over the Thames, close to death. The rescue him, nurse him back to health and invite him to join their show.

But when those who tried to kill him discover that he’s still alive, Tony’s past comes back to haunt him. Can he help Dr Parnassus win the bet and save Valentina, or will his past deeds ruin everything?

Or something like that, anyway. I’m not entirely sure what this was about, actually.

Sadly, from a story point of view, this is a bit of a mess. And it’s not really as if this can be blamed on the script having to be reworked to take account of the death of Heath Ledger. It’s confusing, incoherent and feels haphazard and thrown together.

The rules of the wager seem to keep changing and there are inconsistencies in elements of the story at almost every stage.

It doesn’t have the wit, charm or emotion of the Brazils, Time Bandits, Munchausens and Fisher Kings of Gilliam’s heyday – and the loss of Ledger clearly didn’t help, with the rewrites and reshoots this led to.

To make it even harder to warm to this film, there aren’t any particularly sympathetic characters – there was very little to Garfield’s Anton, Cole’s Valentina was as weak as she was shallow – and while the goodies weren’t particularly good, the devil was almost as sympathetic as they were.

The key character of Tony himself was deliberately complex, but to the extent where the audience feels tricked – one minute, he’s presented as an innocent victim and the next, we’re meant to see him as being as evil as the devil himself.

Ledger’s final performance should’ve been his Oscar-winning Joker, but he’s not bad here – impressively jittery. But filling in behind him, portraying a different Tony each time he jumps through the mirror, Johnny Depp worked well, but Jude Law did little with his role, while Colin Farrell went over the top – but not in the comically ironic way needed for a Gilliam fantasy. Less would’ve been more, in that sense.

More disappointingly, from the visionary director who brought us the likes of Brazil, the visuals fall flat – and that’s largely because of Gilliam’s foray into the world of CGI.

Where he presents us with his usual madcap sets, bursting with props that wouldn’t be out of place in a museum of Victoriana, the film looks every bit as good as some of the best work he’s done – but when he gives us dreamscapes created on a computer, it has all the visual impact of an episode of the Teletubbies.

The crazy imagination of this cinematic genius is clearly working overtime, but he seems to have thrown too many ideas into this one film.

It’s a film to be admired, rather than loved.

It’s a film with ambition, but without direction.

There are wonderful things in this film, but they’re hidden too deep to shine.

It’s perhaps a sign of Gilliam clawing his way back to the top of his game, but he has a long way to go before he reaches the heights of his earlier works.

Perhaps he could take a lesson from his French contemporary, Jean-Pierre Jeunet, whose MICMACS is screening at the London Film Festival. He has a comparable visual style and similarly wild imagination, but he is a good example of a visionary genius doesn’t seem to have lost his way and whose films are consistently triumphant.