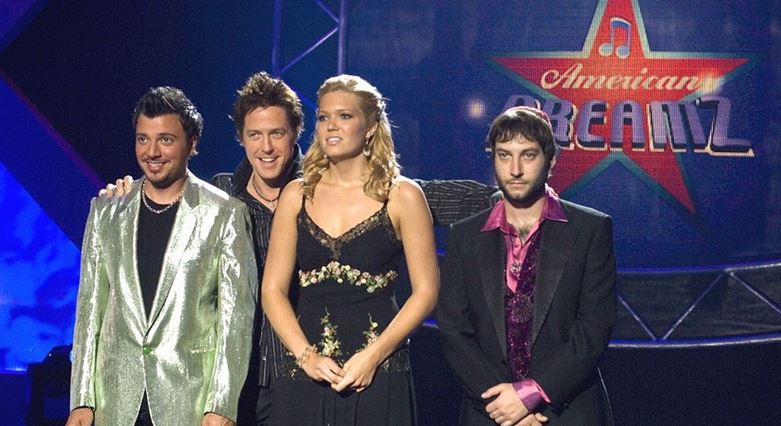 When President Staton (Dennis Quaid) gets re-elected, he decides that after four years in the job, it’s about time he actually found out what’s going on in the world, so he shuts himself away for weeks with a pile of newspapers.

America is wondering what’s happened to him. His chief of staff (Willem Dafoe) comes up with a plan to help him to reconnect with the public…he gets him a gig as a judge on American Dreamz, a top-rated talent show, a la American Idol.

Then there’s Omer (Sam Golzari) – as untalented musically as he is at his terrorist training camp – so untalented that he’s sent to Orange County, for no reason other than to get him out of the way.

But when Omer’s former terrorist bosses find out that President Staton is going to be a judge on American Dreamz, they sign him up to be a contestant.

That these three storylines intertwine goes without saying.

If you’re still not sure what kind of film to expect after reading that plot summary, I’m not surprised. The first storyline sounds like a political satire, the next bit more of a heart-wrenching character-driven media satire and the third segment appears to be a terrorist thriller.

But when you realise that the writer/director is half of the team behind the American Pie series and About a Boy, you realise it’s more of a sly, wry, comic romp – and you don’t get many of them featuring suicide bombers.

In that sense, it’s a brave film, which manages to raise laughs by mocking – even cocking a snook at – the very Islamic fundamentalists who have posed such a real threat to the American Dream.

But in trying to blend three complex stories, each of which could probably have worked as a feature in its own right, it gets too complicated and loses focus.

Who is this film about?

Hugh Grant is deliciously pompous and sleazy. Mandy Moore is as vain and driven as your typical reality TV star. The incompetent combatant and his entourage are charmingly naïve – Islamic fundamentalists won’t like seeing Muslims portrayed as effeminate show-tune obsessives, but that’s kind of the point. And the light touch of

Dennis Quaid and Willem Dafoe’s exasperation are certainly wasted, as theirs is regrettably the least-explored element of the film.

There’s no doubt that it tackles some interesting and grown-up themes, often through thoroughly light and enjoyable gentle comedy, but it lacks the courage of its convictions and would have benefited from more direction. They should’ve picked a story and run with it.