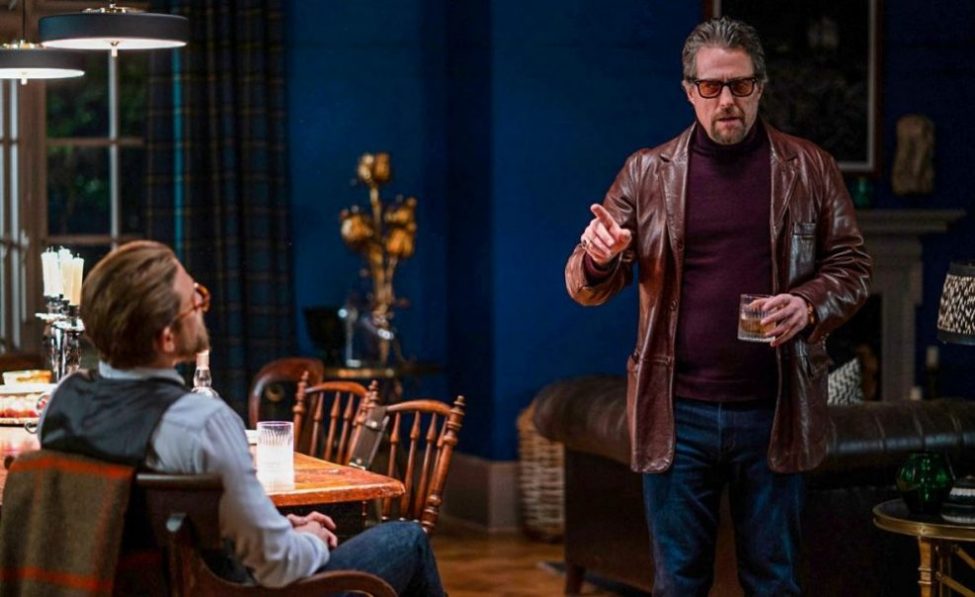 American Mickey Pearson (Matthew McConaughey) has been running a major UK drug dealing business for years but he’s ready to pack it in.

He’s hoping to sell it to a fellow American (Jeremy Strong), but his operation has been coming under attack from all sides, with rival gangs all trying to get a piece of the action, bringing down the value of the business.

His empire comes under further threat when a sleazy private investigator, Fletcher (Hugh Grant) turns up at the home of Mickey’s enforcer Raymond (Charlie Hunnam) and threatens to expose some of his secrets to a tabloid editor (Eddie Marsan) – unless they pay him a tidy sum.

We follow the twists and turns of rival gangs as they jostle for position in the UK’s drugs underworld – with humour and comic-book violence liberally scattered across the way.

It’s a typically fast-paced and fast-talking crime caper, with slickly entertaining gang choreography – not least from Colin Farrell’s boxing trainer – perhaps the only character to emerge from Ritchie’s world with any dignity.

One odd thing about this provocateur’s latest confection is that it’s not quite clear who this film is actually about. From the set-up, you’d imagine it’s a film about Matthew McConaughey’s kingpin, but he’s overshadowed for screen-time by Charlie Hunnam as his lieutenant.

But in truth, this film seem to be about Hugh Grant’s slimey trickster – an overconfident slime-ball with a heavy cockney accent, who thinks he can win every gunfight with his words and his camera.

Ritchie’s clearly having a lot of fun – both with his cast and with the audience – although there’s not as much violence as you might expect – in fact, the film is more about the Gentlement gangsters at the top of the tree, who do all the talking, rather than the lowlings who do the dirty work.

And it’s a little too knowing and self-referential. It’s got the director’s fingerprints – and his name – all over it; a van in the background of one scene is emblazoned with the letters GRITCHIE and a film producer’s office has the poster for one of Ritche’s own films on the wall.

And if Ritchie’s own personality being stamped through the film like a stick of rock isn’t enough, @HackedOffHugh‘s character even gets to have a pop at Brexit and the tabloid press.