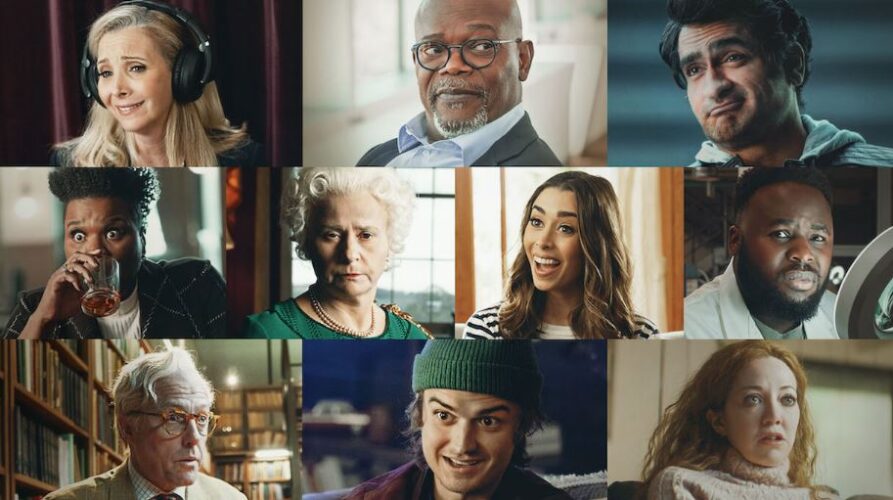 A group of fictitious talking heads – including the hard-hitting journalist Dash Bracket (Samuel L Jackson), the generic average woman Gemma Nerrick (Diane Morgan), the historian Tennyson Foss (Hugh Grant) and a billionaire tech entrepreneur Bark Multiverse (Kumail Nanjiani) – join the Queen (Tracey Ullman) to give their analysis of a year which is likely to go down with infamy in modern history.

Alongside news footage, they discuss everything from the Coronavirus pandemic to Donald Trump’s election defeat and the Black Lives Matter movement.

Fans of satire in Britain will fondly recall Charlie Brooker’s end-of-year “wipe” programmes – the last of which aired on the BBC at the end of 2016.

One of the few bright spots, early in the pandemic, was his Anti-viral Wipe show, in which he returned, in his inimitable style, to lampoon the media’s coverage of the Coronavirus crisis. As would have been familiar to viewers, his own sly observations, delivered directly to the camera, were interspersed with insight from his contributors, Philomena Cunk (Diane Morgan, who turns up here as Gemma Nerrick) and Barry Shitpeas (Al Campbell – who directs Death to 2020).

Rather than return to the BBC for a round-up of this most notorious of years, Brooker has found a new paymaster, delivering a double-length one-off show for Netflix.

He’s spent what’s clearly a US-sized budget on some big names – Samuel L Jackson, Hugh Grant and Lisa Kudrow being the most notable – and a team of writers bigger than the cast.

But what he’s done is left out the best bits of “wipe” – his own incisive commentary on the way others have covered the craziness – and left in the less consistent talking heads and linked them with a narrator (Laurence Fishburne), who’s perfectly capable of narrating, but doesn’t have the knowing, sarcastic snarl of Brooker himself.

Buried in this 70 minute mockumentary are some razor-sharp observations, but you have to dig through a peculiar mixture of simple, predictable and unadventurous gags – sanitised for the global market – and some language so blue that it’s shocking to hear it on American TV, even if it is a streaming service.

Some of the character names are somewhat arch – Gemma Nerrick (G Nerrick?) just about works to represent Miss Average, but Pyrex Flask as a cool scientist, Duke Goolies as a social media influencer Bark Multiverse lose any sense of it possibly being real before you start.

And in a year when many people have been exchanging similar views on their chosen social media, you feel you could have got many of the same comments from real people, without having to pay big stars, whose presence could even distract from what they’re trying to say.

There are moments where the subtlety of a “wipe” script jump out and have you nodding with satisfaction – a comment about the “breath-taking lack of ventilators” was particularly sharp – but such gems are rare and there’s too much reliance on running gags – about Joe Biden’s age, for example, like no-one had previously noticed that the next US President will be the oldest in its history. There’s also rather too many knowing nods to Netflix itself. Some of it just feels a little lazy.

Diane Morgan is fun as Gemma Nerrick, but could she not have just been Philomena Cunk? Some of the other characters are more successful than others, while Brooker relegates himself to the behind-the-scenes film-maker, asking his guests questions off mic.

But the big highlight of the show is Tracey Ullman’s portrayal as the Queen – from one of the more acceptable mentions of Netflix to her response to reading Meghan Markle’s instagram.

A global streaming audience, unspoilt by Charlie Brooker’s razor-sharp satire in the past, may well lap up his take on a year no-one will forget, but fans of his previous outings are likely to feel just a little short-changed – and find themselves crying out for a 2020 Wipe, in which Brooker himself tells us what he really thinks – about things a little closer to home. Come home Charlie!