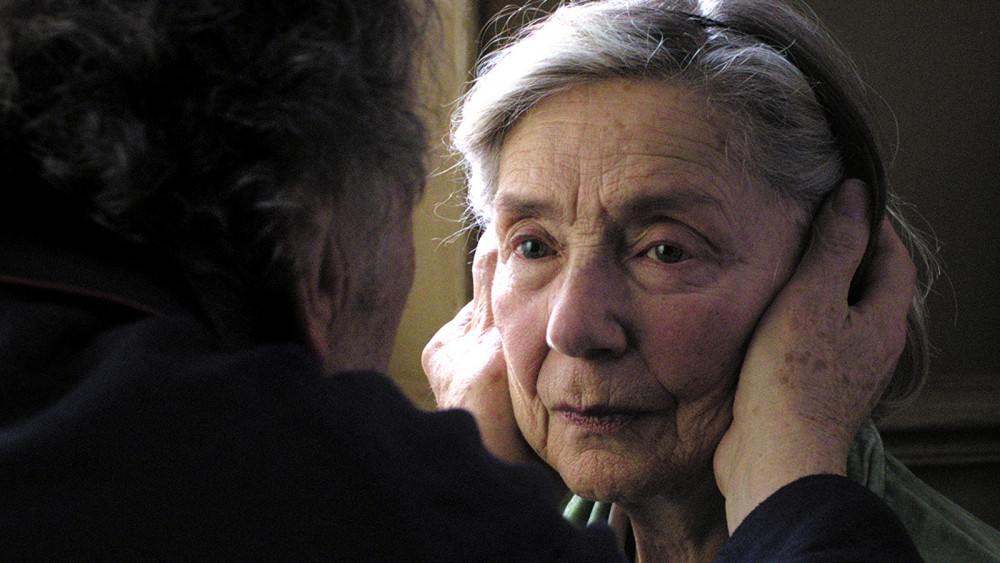 Georges (Jean-Louis Trintignant) and Anne (Emmanuelle Riva) are a devoted long-married couple, retired music teachers, enjoying their twilight years together to the full – outings to concerts, playing music around their Paris apartment and taking visits from their somewhat aloof daughter Eva (Isabelle Huppert).

Their loving bond is tested when, one morning, Anne has a seizure of sorts. It turns out that she’s had a stroke, that leaves her without the use of an arm. Georges’ role now extends from partner to carer, helping her eat, dress and bathe.

Eva makes vague gestures about being there more, but her offers of assistance are as useless to Georges as they are unwelcome. What was already a difficult relationship with their daughter is stretched to its limit.

As Georges struggles to help Anne maintain her dignity, she has another stroke and her condition deteriorates further, both physically and mentally. Soon, she is bed-bound and struggling to speak.

Georges loses his patience with everyone else – Eva, the care assistant he hires to help; no-one can offer Anne what he can, because no-one loves her like he does.

But as Anne continues to go downhill, having promised never to send her to a care home, Georges is finding it harder to see her suffer and live with her pain.

When a film arrives, weighed down with trophies and other accolades, sometimes it’s as wonderful as everyone says, other times it’s more of a case of the emperor’s clothes; while cineastes love them, there’s little public appreciation by wider audiences.

Michael Haneke’s previous award-magnet, The White Ribbon, fell largely into the second category; drowning in plaudits, many found it to be inaccessible, even pretentious.

But Amour is different. Like it’s predecessor, it won the Palme d’Or in Cannes and was nominated for the top prize at the London Film Festival and has received glittering praise from critics across the world, but unlike The White Ribbon, it’s not only accessible, but grounded in a frightening reality. Death comes to all of us – and loved ones are left behind.

Amour is not about death itself, but the run-up to it. It will bring back the pain and anguish of inevitable, impending loss for anyone who’s been through the heart-break of losing the closest person to them.

This is not a feeling you would think anyone would volunteer to experience for the first time, or indeed relive, but Haneke’s control of his characters, the flow of the story and the performances of his actors draws the audience inexorably into a deathly drama, a last dance of a loving couple.

Jean-Louis Trintignant’s portrayal of a protective husband watching his beloved wife of many decades slip away is mesmerising, while Emmanuelle Riva is utterly convincing in her plight, as she drifts further from independence. In a small supporting role, the ever reliable Isabelle Huppert is cooly detached in her desire to be useful but inability to connect.

Sickness and death drives this family apart, rather than draws it together.

The film is depressing – in terms of its narrative and mood – and necessarily so. But it’s beautifully filmed and the apart from the opening shot of the audience at a concert, every last frame is staged inside the apartment in an increasingly claustrophobic manner that will have you gasping for breath almost before Anne does likewise.

Anne’s final days – confined to the ornate wood-clad apartment – almost echo a future confined in another, smaller, wooden box.
For a film of such relentless misery, it’s inexplicably uplifting, as the couple at its heart portray true love like it’s rarely seen on screen.
It can’t be possible to say you enjoy this film, but it’s equally impossible not to admire it.
From Funny Games to The Piano Teacher to Hidden and of course The White Ribbon, Haneke is not a director who is frightened of tackling tough subjects – often, he’s provocative, almost sadistic, but here, he’s descriptive and caring.
Rather than trying to shock us, he allows us the opportunity to contemplate something we would almost certainly prefer not to, but probably should anyway.