After a little lie in, I headed into Cannes in time to catch the press conference for Ira Sachs and Isabelle Huppert’s Frankie, not least to try to find out if they thought it was deeper than it had come across on screen. 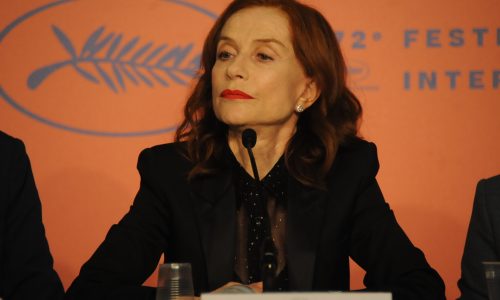 They certainly seemed to imbue the film with depth that was clear – a dying woman was bringing her family together to say goodbye – but it still didn’t seem to have much purpose. The group were not generally doing things together, revealing long-held secrets, developing as characters. Little changes for anyone as a result of their trip to Sintra. But their film-making process was not without interest. Explaining why we only got a brief window into the lives of these characters, Sachs told us, “Films are told in the middle. When the movie is over, the family goes on without you. I like to give enough, but not too much.” His theatrical background also played into the style of his direction, as was evident from many long, static wide shots. “Emotion comes from the choreography of the characters,” he revealed, “Not from editing.” In a somewhat calmer role than we’re used to seeing her in of late, Huppert, was glad of he opportunity to be more subtle. “Ira’s camera could capture small moments and make them big,” she enthused.

Next it was off to catch another film in the official selection, La Belle Époque, chosen largely based on the fact that it was the next one to start, as is often the determining factor in scheduling your Cannes plan. But what fortunate timing it was, because Nicolas Bedos’ bittersweet comedy-drama was an unexpected delight, which went on to support my hypothesis that all of the most entertaining and emotionally satisfying films are playing out of competition. This was up with Rocketman and The Best Years of a Life on my list, so far, of What’s Worth Seeing from Cannes.

The veteran French star Daniel Auteuil stars as an ageing cartoonist who’s kicked out of home by his wife, played by Fanny Ardant, who’s long since become bored and even resentful of their marriage. Auteuil is given – as a gift – a couple of nights at a company which recreates any time in history for you to experience and he decides to return to the moment he first met and fell in love with Ardant – and promptly falls in love with the actress hired to play her. Bristling with 1970s nostalgia, it’s warm, funny and original and Auteuil’s magnetic performance keeps you gripped, even when the plot risks becoming just a little far fetched.

Next I made a little time to help my friend shoot an interview for a third time – but I was keen to be finished quickly enough to get into the queue for the hottest ticket in town – the first press screening of Quentin Tarantino’s Once Upon A Time…In Hollywood. Even in a 1200 seater cinema, all it would take would be 1000 white or pink badges and a further 200 or so blue ones in front of me and I could be queueing for two hours and still not get in.

The interview went on – and on and on – and since it was in Arabic, I couldn’t even make an educated guess at how close we were getting to the end – but it went on for over 25 minutes and this left me probably about 200 back in the blue queue. And if I didn’t get in, because his interview had gone on for so long, this time there would be no consolation prize of a ticket to the after-party that he could have got me – he’d given it to someone else,  claiming that he thought I was leaving Cannes today and so would’t be around. Hmm.

Anyway – back to the queue and the two hour wait. After networking at parties and and butting in to other people’s conversations in places such as the UK Film Centre, queues are one of the best ways to meet people in Cannes, as it can be a long and boring wait if you don’t start talking to the people around you. And next to me in the queue today was Matej Patljak, a Slovenian journalist, who – it turned out – was also a professional autograph hunter, a sideline that more than covers the cost of his Cannes trip, and he also runs a chain of cinemas in four cities in his native Slovenia. Hearing how he operates offered a fascinating insight into how cinema works in smaller countries. He doesn’t own a cinema building in each of the four cities – he hires a public building for the day and projects a film there, moving onto the next city the next day, and so on. Essentially, these towns have a cinema for a couple of days a week and unless it’s a particularly big blockbuster, the only film on offer will change each week.

Luckily, there was plenty for us to talk about, because the wait went right to the wire – and past it. The whites and pinks were inside, the yellows had been told not to bother hanging around but for the blues, it could’ve gone either way. People were being admitted in dribs and drabs as the start time drew closer. They were still being let in after the film had started, at which point, we wondered whether we wanted to be let in at all, having missed the beginning. But about ten minutes in, with only about a dozen people still in front of me, we were told it was full and sent away.

Like with every such occurrence in Cannes, it helps to have a back-up, and I had over an hour before my back-up began so I took a walk through the Market. With four full days to go at the Festival, the Market was very clearly winding up. During the day, many of the companies had been packing up their stands and when I passed the stand of Evolutionary Films, sure enough, large cardboard boxes were lined up under their posters at the end of a busy and – as they described it – productive week.

The rain hadn’t dampened their Cannes, as they spent most of the time meeting buyers from around the world at their booth in the Riviera area of the market.  They’d had particular success with their action sequel Vengeance 2, starring Vinnie Jones, which has sold to territories including North America, China, Korea, the Middle East and South Africa based only on a promo reel, as it’s not even finished yet. They’re expecting Japan signing up on completion, with others to follow once it’s released in the first territories. But their experience of the market this year is that action films have generally been doing very well. Evolutionary Films’ Managing Director Diane Shorthouse said that in recent years, the market has been saturated with no-budget horrors, leading to a backlog that has to be complimented with other genres. An increase in the number of online platforms, she said, it also making it harder for viewers to find smaller film, especially those without big names in the cast.

Leaving them to carry on packing, I headed off to my Tarantino back-up, interestingly enough a contemporary and friend of his, Robert Rodriquez. The even was labelled as a masterclass, including a screening of his latest film, Red 11.

His masterclass was aimed at inspiring the next generation of film-makers, especially those with little money to spend. While his words were inspirational, his delivery – surprisingly – was not, as he hid his eyes beneath the brim of his hat and spent most of the session reading from his notes.

He began by saying he wanted to do something to mark the twenty fifth anniversary of his no-budget hit El Mariachi, which was famously shot for $7000. And what he’s done is produced a two and a half hour documentary, following the production of another $7000 film, Red 11, based on his own experience of taking part in medical experiments, to find his debut. His lessons included the fact that a lack of money isn’t a barrier to making a film, “When you strip away all your resources, all that’s left is your creativity.” He also advised aspiring film makers, “Don’t get hung up on what you don’t have. Focus on what you do have.” And to those who never get around to getting going on their dream project, he warned them, “‘Never found the time. Not ready’. You don’t want that on your tombstone. When you start, you have momentum and momentum creates time. Don’t wait for the passion, you get the passion from doing.”

Encouraging and inspiring as these aphorisms were,  it’s disappointing to report that the film wasn’t up to his usual standards. He did open by saying that he’d never intended to show the film, only the documentary about the making of the film – perhaps he should’ve left it that way. 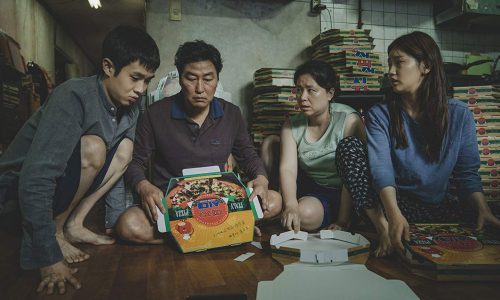 This evening’s activity was the follow up to South Korean director Bong Joon-Ho’s Okja, which caused a stir at Cannes two years ago, because it was backed by Netflix.

Parasite is about a poverty-stricken family who taste the upper-class lifestyle when a wealthy family take on the son as an English tutor. Before long, they’re living off the riches of the employer – but there’s a twist in the title that turns the film from a social comedy to something altogether darker. It’s a clever and seamless blend of genres that results in one of the more entertaining films Cannes has had to offer – and as such, I was somewhat surprised to realise that this one is actually in competition.

On the way back to the apartment, I was feeling a little thirsty, which reminded me – yesterday I’d hidden two cans of drink under a tree by the Lumiere and a bottle of water under another, to try to avoid the Cannes Food Police, so I popped by to see if they were still there. Happily, some 30 hours on, they were.